Jane Roe Of Roe v. Wade Case Didn’t Change Her Mind On Abortion. She Was Paid To Lie By Evangelists

Rev Schenck, who was instrumental in getting McCorvey to change her stance, admitted that they were "playing her." 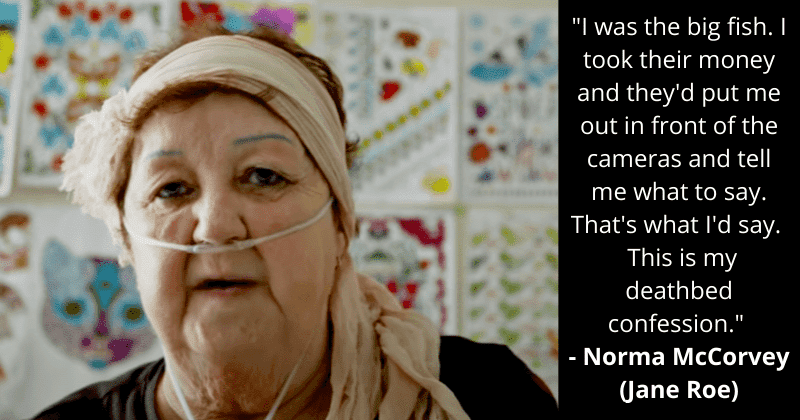 Norma McCorvey, Roe in the Roe vs Wade case has revealed that the anti-abortion movement led by Christian evangelist leaders paid her nearly half a million dollars to get her to reverse her stance on abortion. Ultra-conservative groups and anti-abortion activists used Norma McCorvey's changed stance to push forward their agenda by propping her up at anti-abortion rallies. Norma McCorvey reveals the events that unfolded in a new documentary that's going to be aired on FX shows. “I was the big fish. I took their money and they’d put me out in front of the cameras and tell me what to say. That’s what I’d say,” said McCorvey, reported The Guardian. “I did it well too, I am a good actress.” She admitted Operation Rescue was one group that had fronted her for their purpose.

Evangelical Christian leaders like Operation Rescue’s founders the Rev Flip Benham and the Rev Rob Schenck were instrumental in paying Norma McCorvey and getting her to chang her stance to give the anti-abortion movement a fillip. The anti-abortion movie even made a movie titled Roe v. Wade, starring Jon Voight and Stacey Dash and showed McCorvey’s “conversion” to a born again Christian. It has now been revealed that Norma McCorvey's conversion was nothing but paid propaganda. The documentary reveals that McCorvey received at least $450,000 in “benevolent gifts” from the anti-abortion movement. “This is my deathbed confession,” she said. She died of heart failure at the age of 69.

Wow: Norma McCorvey (aka “Roe” of Roe v Wade) revealed on her deathbed that she was paid by right-wing operatives to flip her stance on reproductive rights.

So, like many right-wing operations, it turns out a huge part of the anti-choice movement was a scam the entire time. https://t.co/XBwvPKmSqU

McCorvey as a 25-year-old single woman under the pseudonym Jane Roe challenged criminal abortion laws in Texas that forbade abortion as unconstitutional. The landmark judgment in the Supreme Court ruled that the government lacked the power to prohibit abortions. FX's documentary titled AKA Jane Roe is set to explore McCorvey’s troubled childhood including incidents of alleged abuse and neglect. She also had a short-lived marriage as a teenager before entering a decades-long relationship with girlfriend Connie Gonzalez. The documentary also shows McCorvey’s disappointment in watching Hillary Clinton lose to Donald Trump in the 2016 Presidential elections. “I wish I knew how many abortions Donald Trump was responsible for,” she said in the scene from the documentary. “I’m sure he’s lost count, if he can count that high.” McCorvey was referring to Trump's sexual assault cases.

The woman at the center of the landmark Roe v. Wade ruling makes a startling deathbed confession. #AKAJaneRoe premieres May 22 on FX, next day #FXonHulu. pic.twitter.com/LXeYuCGElP

The Rev Schenck said they were very aware of what they were doing and was scared she would move back to the other side. After watching McCorvey make her confession, Rev Schenck said he had “never heard her say anything like this” but said he suspected she knew they were using her. "There were times when [he] was sure she knew”. “I wondered, ‘Is she playing us?’” said Rev Schenck. “What I didn’t have the guts to say was, ‘because I know damn well we’re playing her’.” After her purported conversion, McCorvey was a regular at anti-abortion rallies and also featured in various anti-abortion documentaries, and also published a memoir, Won by Love, in 1998, detailing her conversion.

Nick Sweeney, director of the documentary said the aim of the documentary wasn't to stir the pot of tension between the pro-choice and 'pro-life' movements but to capture the life of an “enigmatic person at the center of this very divisive issue”. Sweeney said both sides have sought to claim 'Jane Roe,' the namesake from the landmark Roe Vs Wade case. “With an issue like this there can be a temptation for different players to reduce ‘Jane Roe’ to an emblem or a trophy. Behind that is a real person with a real story. Norma was incredibly complex,” said Nick Sweeney.

Congresswoman Alexandria Ocasio-Cortez said it was no surprise that evangelists had paid Norma McCorvey to change her stance. "So, like many right-wing operations, it turns out a huge part of the anti-choice movement was a scam the entire time," said Ocasio-Cortez. McCorvey had changed her stance through her life but on her deathbed she made it clear which side she stood with. “If a young woman wants to have an abortion, that’s no skin off my ass. That’s why they call it choice,” said McCorvey.