Grandmother Cleaned 52 Beaches In A Single Year: "It's In My DNA" 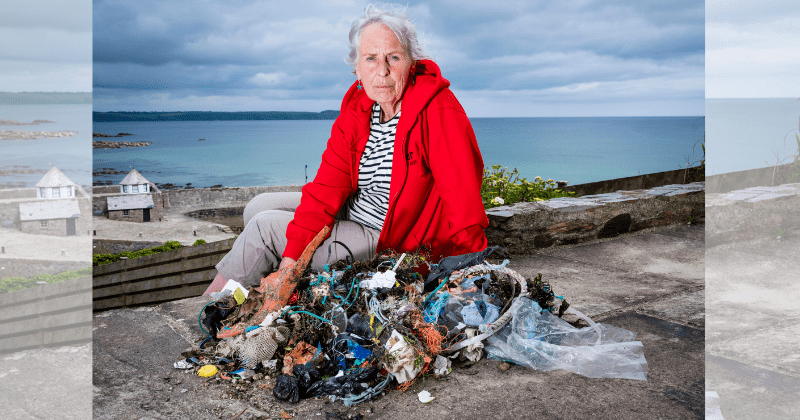 A grandmother in England spent an entire year cleaning as many as 52 beaches near her home in Cornwall. After she was done, she has decided to not stop. She now aims to clean more beaches around the country and spread awareness against littering and the harm that plastic can do. Pat Smith, a grandmother in her 70s, is one determined lady. She started her own organization called Final Straw Cornwall, aiming for more of such conservation and environmental efforts and awareness initiatives. Talking about the start of her cleaning drive back in 2018, she told PEOPLE, it began as a New Year Resolution. She said, "I started on January 1, 2018. I did one beach a week for the whole year, apart from a couple of occasions where I did two.” During the drive, she collected as many as 13,000 pieces of garbage in 52 British beaches.

Among the rubbish was plastic, the most common pollutant, as well as other items such as fishing nets and lobster pots. “The vast majority is broken up pieces of everyday used items, like bottle tops, toothpaste caps, and broken up water bottles. Once some plastic gets into the sea the waves sort of bashes it up, so what we get on the beach is small bits of the remains. That’s unless we’ve had a violent storm. Sometimes when the storms really rage the waves carry in much bigger stuff,” she said. Smith went about her goal with an obsessive streak and did not stop even when she was on vacation. “It was just a case of trying to do them wherever and whenever I could. It’s a case of once your eyes are opened to it, you can’t ever switch off,” said Smith.

Microplastics on our beaches gives an indication of the amount piling up in the oceans An environmental catastrophe needs to be urgently addressed by Governments around the world No amount of caring individuals can tackle it on this scale 😖@sascampaigns @stevedouble https://t.co/VJqoSteMc8

Prior to going on the cleaning drive, Smith had already walked 305 miles of the coastline in 21 days around three years ago. She now wants to make the entire Cornwall plastic-free. During her drive, her grandchildren - Wilfred, 11, Megan, 9, Sam, 7 and Jasmine, 4 - also regularly joined her. "My grandchildren are absolutely fantastic. They’re always calling me over and saying “Gran, some plastic! Gran, some plastic!’ I pick up an awful lot of plastic, I can tell you!” Smith said. She always walks around with a bag and glove in her pocket at all times and added that cleaning was “in my DNA now.” She said further, “It’s just what I do and hopefully my grandchildren will be doing the same thing. I won’t stop, as our beaches need me!” A number of campaigners and volunteers also joined Smith in the cleaning drive, according to Good News Network.

“People don’t understand I’ve been doing this voluntarily. We should all take responsibility for picking up the litter, as well as ensuring we don’t drop litter in the first place," said Smith, who also runs a famous bed and breakfast in St. Austell. She hopes her work and campaign will create more awareness among people. “A lot of the rubbish I have picked up consists of everyday items. These things are used by all of us and it is shocking to find them polluting our beautiful beaches. Please let’s try to be more thoughtful in this coming year.” The Final Straw Cornwall website mentioned that its aim was to encourage "individuals to refuse plastic straws when offered and businesses to join us and commit to not provide any other straws other than paper ones."

Pat Smith, 70, trawled 52 of Devon and Cornwall's iconic beaches armed with bin bags, rubber gloves and a little picker after she made a New Year's resolution to clean one sandy beach every week. #Agequality #somegoodnews https://t.co/Ej5bjDKYvk

It added, "Using this as an entry-level on the road to raising awareness of the issue of single-use plastic pollution to the general public, I feel excited and enthusiastic about encouraging behavior change in a wider group of people than my fellow environment embracing counterparts"