In an episode of CBS Sunday Morning, the Black actor became emotional about the Jewish man who changed the trajectory of his life. 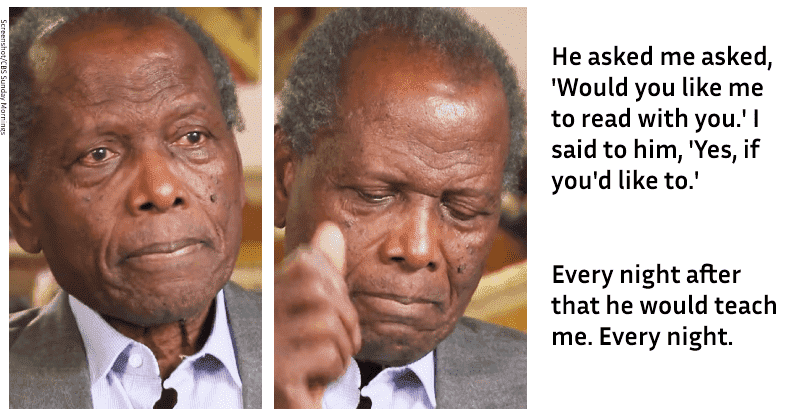 Last week, Hollywood's first Black movie star Sidney Poitier tragically passed away. As fans mourned the actor's passing, they shared an emotional segment from CBS Sunday Morning with Lesley Stahl. In the episode, Poitier chokes up as he recalls how a kind Jewish waiter taught him how to read when he moved from the Bahamas to New York with big dreams of making it as an actor. Poitier, an actor, director, and civil rights icon, was the first Black man to win the Oscar for best actor. His death is a massive loss to Hollywood.

WATCH: Sidney Poitier, who passed away this weekend at age 94, chokes up as he tells Lesley Stahl about the elderly Jewish waiter who taught him to read, enabling his acting career to take off pic.twitter.com/MPkDynlFYU

In the CBS Sunday Morning episode, Poitier explains how he came to learn to read in English. He worked at a restaurant washing dishes to get by after arriving in New York. He would regularly bring newspapers to his shifts. One day, a Jewish man asked him about the news at which point he explained he could not read English. "I sit there, and I’m reading one of the papers," the actor shares. "And there was a Jewish waiter sitting at the table, an elderly man, and he saw me there. He got up, and he walked over, and he stood by the table that’s next to the kitchen, and he said, ‘Hi. What’s new in the papers?’ And I said to him, ‘I can’t tell you what’s new in the papers because I don’t read very well.' I didn’t have very much of an education."

To Sir, with Love. Thank you to the kind old Jewish waiter who changed the course of one man's journey to greatness with the power of kindness & generosity. For that, we owe you the world. May you have an amazing visit from this King upon his entrance to eternity. #SidneyPoitier pic.twitter.com/oswXJPWAOj

Poitier continues, "He asked, 'Would you like me to read with you?' I said to him, 'Yes, if you'd like to.'" Every night, the waiter would sit with him to teach him after his work shift was over. Fighting back tears, Poitier recollects the kindness of a man who had nothing to gain from teaching him but did it regardless. He shares, "Every night after that he would come over and sit with me, and he would teach me what a comma is and why it exists, what periods are, what colons are, what dashes are. He would teach me that there are syllables and how to differentiate them in a single word and consequently, learn how to pronounce them. Every night."

BREAKING: Beloved Bahamian actor and former ambassador Sir Sidney Poitier has died. He was 94. A Broadway play about the trailblazing career of the visionary actor was announced last month. Sir Sidney's death was confirmed by Minister of Foreign Affairs Fred Mitchell. pic.twitter.com/WVJFlog3tC

Slowly but surely, the lessons changed the trajectory of the actor's life. Nonetheless, he still had one regret. Poitier reveals in an episode of the podcast What It Takes, "One of my great regrets in life is that I went on to be a very successful actor, and one day I tried to find him, but it was too late, and I regret that I never had the opportunity to really thank him." He has also paid tribute to the kind Jewish man in interviews with Oprah, on 60 Minutes, as well as in multiple award acceptance speeches. Thanks to his selflessness, Poitier went on to become one of the biggest stars in Hollywood. As Denzel Washington perfectly put it: "You couldn’t cut Sidney Poitier out of a Sidney Poitier picture. He was the reason a movie got made. the first solo, above the title, African-American movie star. He was unique."

“I am the me I choose to be.” - #SidneyPoitier pic.twitter.com/Um0zjjvR4a