While the bounty hunter previously denied all claims of being in a romantic relationship with Angell, a shocking new teaser from his upcoming appearance on 'The Dr. Oz' Show, seems to indicate otherwise. 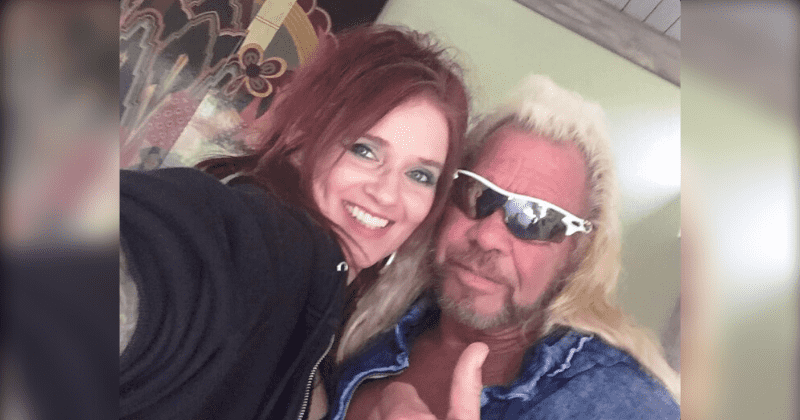 Ever since the love of his life, Beth Chapman, tragically passed away 7 months ago, Duane 'Dog The Bounty Hunter' has seemed an emotional wreck. The renowned bounty hunter has repeatedly lamented the loss of his beloved life partner during interviews, opening up about how he felt without her by his side. However, in the past few months, the 66-year-old has found comfort and companionship in his longtime friend Moon Angell. The pair's growing intimacy led to speculations about the nature of their relationship, causing rifts in the family when Duane's daughter Lyssa Chapman accused Angell of trying to take Beth's place.

At the time, the Dog's Most Wanted star denied all claims of being in a romantic relationship with Angell, however, a teaser from the celeb's upcoming appearance on The Dr. Oz Show seems to indicate otherwise. In the short clip, an emotional Duane appears to get caught up in the moment and seemingly propose marriage to his alleged girlfriend. "I am a lot happier with her around," a teary-eyed Duane says in the 30-second clip. The teaser also features Angell admitting that she has "lots of enemies right now," likely in reference to the Twitter feud with Lyssa.

However, the most shocking moment in the teaser comes at the 16-second mark when the widower turns to his reported girlfriend of two months and asks: "Moon Angell, will you marry me?" Both Angell and Dr. Oz are left visibly stunned at the unexpected proposal in the teaser, heightening viewer anticipation for the full episode that's due to air on Monday.

After weeks of family turmoil, @DogBountyHunter and Moon Angell join me to set the record straight.

Meanwhile, Beth's loyal fans are not happy about Duane's startling proposal. As many called attention to the bounty hunter's promise to never walk down the aisle again, a few empathetic social media users defended his actions, attributing it to loneliness and the need for companionship. Sources connected to The Dr. Oz Show informed TMZ that Duane "told Moon he loved her and revealed he was talking to God in the bathroom during a break, and God told him he should propose." However, those close to the Chapman family told the tabloid the bounty hunter isn't actually engaged to Angell, deeming the proposal invalid.

Sources close to the family stated that Duane was extremely emotional and caught up in the moment when he made the TV proposal last week during the taping. He reportedly didn't give Angell a ring when he proposed and insiders insist the two aren't engaged. Legit or not, the proposal already appears to have fueled to Lyssa's growing disapproval of her father's new relationship.

Lyssa initially seemed to hold back her thoughts about the proposal with a vague tweet that reads, I will not tweet. I will not tweet I will not tweet. I will not tweet. However, her resolve broke when a follower tweeted in support of her father defending his actions as that of a grief-stricken widower. I completely understand your plight and anger at all this. I am shocked. However, I do understand a man’s need for a woman and not to be alone. There is a better choice for sure... and your dad deserves better than his choice. Praying for you all, Laureen C Stephens tweeted. A need for a con artist? Lyssa asked in response. Only Monday's episode will tell us more about this unexpected turn of events in Duane's life.