Ellen Pompeo said she didn't like Oscar-winning actor calling the shots on the set when she improvised a few lines. 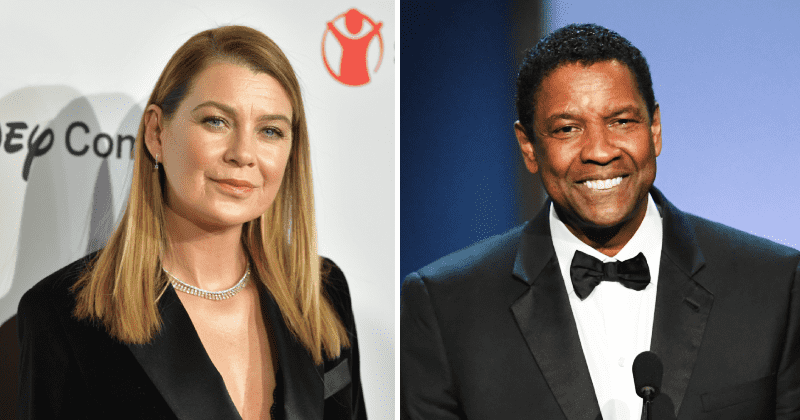 Ellen Pompeo is getting slammed after revealing she clashed with Denzel Washington while the latter was directing an episode on the set of Grey's Anatomy. Pompeo, who stars as Meredith Grey on the medical drama, opened up about fighting with the movie star on her podcast: Tell Me with Ellen Pompeo. She said the pair didn't get on well on the set and there was constant friction while they worked on an episode in 2015. Pompeo said the pair went 'at it' during filming, reported People. Pompeo said she had improvised the line, "Look at me when you apologize—look at me!" and the Oscar-winning actor intervened and asked her to stick to the script. "That wasn't in the dialogue and Denzel went ham on my a**," she said, before adding: "He was like, 'I'm the director. Don't you tell him what to do.'"

Pompeo didn't like Denzel Washington's notes on her performance, so she lashed back. "I was like, 'Listen, motherf*****, this is my show. This is my set. Who are you telling? You barely even know where the bathroom is," she reportedly told him. "Denzel's a movie star, right? He doesn't know s*** about directing TV," she said. Washington was directing season 12 episode The Sound of Silence." She spoke about the experience of working with Washington on her podcast featuring her former costar Patrick Dempsey as a guest.

Ellen Pompeo really tried to cancel Denzel Washington today - because he was doing his job as a director - and all of Black Twitter told her NOT TODAY, boo

You love to see it pic.twitter.com/ehDf1ppEF3

Pompeo then went on to add that the star was directing en episode only because his wife is a big fan. "I think he saw it as a good exercise to just come in and direct something quick." Pompeo said the incident occurred because they were both actors. "So, we didn't get through it without a fight, but that's actors for you," she said.

Denzel Washington: Ellen can you move slightly to the left..

Ellen Pompeo : DO YOU KNOW WHO TF I AM?! This is MY SET! THIS IS MY SHOW pic.twitter.com/zduokIDJ6A

Ellen Pompeo faced a severe backlash online as many concurred that she was incredibly disrespectful to Denzel Washington, not because of his stature as a movie star, but because he was the director, whose job is to take the final call on the set. One tweet read: Ellen Pompeo really disrespected Denzel Washington and proudly told the world like we were gonna be on her side. While another tweeted: "I don't know if Ellen Pompeo revealing that she yelled at Oscar-Winning Denzel Washington on the set of Grey's Anatomy is the flex she thought it would be. She seems like a Karen, and if I hear her say one more time she's married to a Black man and has Black kids..."

Ellen Pompeo telling us that Denzel story is like when Liam Neeson told us that story about him wanting to kill a random black man. No one asked. But they know nothing will happen to them if they tell the story because of their privilege.

Despite saying they didn't get along on the set, Pompeo said she had the "utmost respect for [Washington] as an actor and director" and that working with him was "amazing." She went on to add that she was actually a huge fan of the actor but getting him to direct one of the episodes was how Debbie Allen tried to keep her on the show. "Debbie Allen was like, 'What can I do to keep Ellen interested? What can I do to keep Ellen here?' because after you left, I was like, 'Oh, why do I have to stay here? I've got to go now. Everyone's gone. Sandra's [Oh] gone, Patrick's gone. I've got to go too,'" she told Dempsey. "And Debbie was like, 'No, no, no. You've got to stick around. I'm going to bring in a surprise for you,' and she would never tell me who it was. But she knew I was a huge fan."

People like Ellen Pompeo think they can “extra credit” their way out of being just as banal, dangerous and prone for betrayal as other white people. She thinks her black husband and her black kids give her a hall pass. Absolute trash. And SHE told on HERSELF.