The pictures were taken in the eastern state of West Bengal. 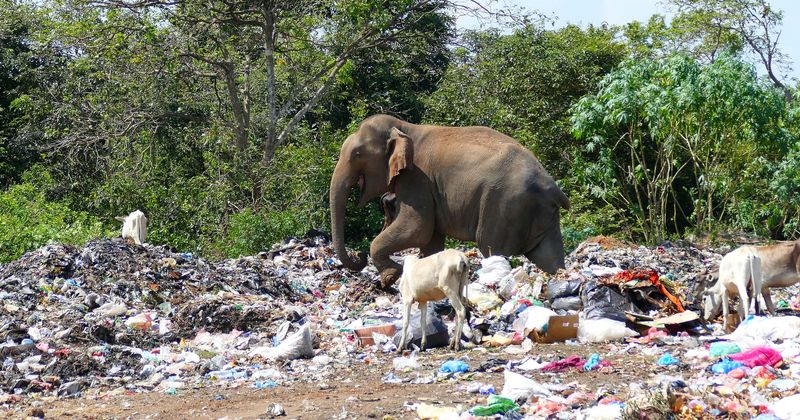 We know very well that humans and their activities have increasingly encroached into animal habitats. But one thing that has led to severe harm is man's inability to control their own waste, which spills into places frequented by animals. Recent pictures of an elephant in India rummaging through garbage as it tries to forage for food are heartbreaking and alarming. The pictures were taken in the eastern state of West Bengal, reports Daily Mail, and have quickly gone viral online, evoking angry reactions as well as those of sorrow at the sad state of affairs. The pictures were taken by a sports journalist named Pranab Das who lived not too far from the area. He said that the elephant ate a lot of plastic when he took pictures if it.

Hungry elephant eats PLASTIC rubbish as it rummages through trash dumped by tourists in India https://t.co/FTqhFPXbL6

These heartbreaking photos show the elephant with rubbish resting on top of its back and head after it flings it over its shoulder with its trunk while looking for food. The scattered garbage below comprises mostly of plastic products such as bottles, bags, as well as plastic packaging. In the background is a forest. Das said that he took the pictures in the hope that they would make people aware of what their actions of littering can lead to. Das said tourists often threw rubbish without any care and he asked people to take care of the environment. "I hope these photos encourage people to stop littering. The garbage was left behind by vans. The elephant was snacking on plastic which was painful for me to see," he said. Some years ago, another instance of an elephant eating from a huge pile of garbage near a road was caught on video.

Very sad on the part of management,proper food stuff be provided without further delay.

The video was taken in the hill town of Ooty located in the southern state of Tamil Nadu. The video showed the animal eating what appeared to be paper and plastic. Sometime before this video emerged, there were reports of an elephant that died in the neighboring state of Kerala. As much as two kilograms (4.5 lbs) of plastic waste waa stuck in its bowels after the dead elephant found in a forest clearing. One of the dangers to elephants in these parts is from eating garbage, which is easily found near any human settlements. But around the world, there have been reports of other animals eating from the rubbish with adverse results. Just last year, as many as 52 polar bears were seen eating from a garbage yard in Guba, in one of the remotest parts in Russia. The place is located near an Arctic archipelago, which is the reason why the animals were spotted in the first place.

They apparently attacked locals, barged into apartments, and ransacked garbage dumps, according to a local government statement. This led to a state of emergency. "People are scared, afraid to leave the house … afraid to let their children go to school. Constantly in the village are from six to 10 polar bears," said a local school administrator. Experts from the A.N. Severtsov Institute of Ecology and Evolution, Moscow, blamed the thinning ice due to global warming that was driving the animals more inland. People in the town have now resorted to fencing the buildings as well as deploying dogs and cats in order to try and scare the bears. The garbage from humans has also made its way to the ocean and led to tragic cases such as this shocking death of a pregnant whale in Italy, as we previously reported.

An extremely thin polar bear showed up hundreds of miles south of its normal habitat, in an area with massive sea ice loss: https://t.co/KS7eNxEqr7

The creature was found to have ingested 49 pounds of plastic waste. Its fetus was also dead inside the mother's womb due to garbage. The animal was found washed ashore in Sardinia.