trending celebrity people lifestyle news animals
81-Year-Old Man Wasn't Allowed To Visit His Wife At Hospital, So He Serenaded Her From The Street

81-Year-Old Man Wasn't Allowed To Visit His Wife At Hospital, So He Serenaded Her From The Street

The 81-year-old played the accordion on the street outside her hospital as his wife and two others watched on from her window. 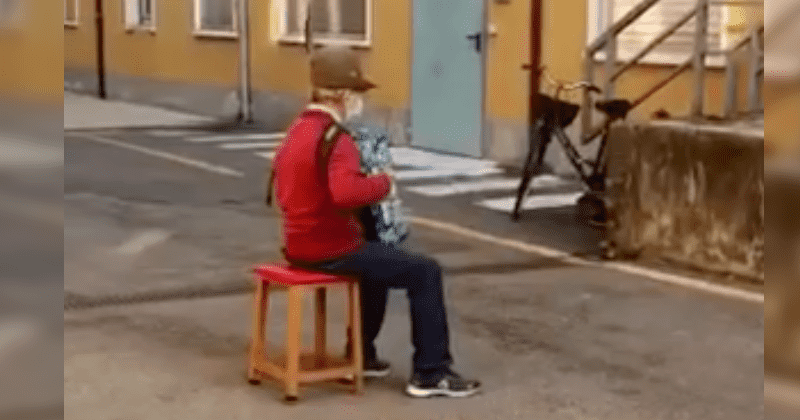 Stefano Bozzini, 81, was not allowed to visit his wife at the hospital on account of the Coronavirus pandemic but it was not going to stop him from being with her. While he couldn't be there physically at her bedside, he serenaded her from outside her hospital window on his accordion. Nothing quite erases the barriers of time and distance, like music. As Stefano Bozzini played his wife's favorite tracks from the street, his wife, Carla Sacchi, and two other people watched on from the hospital room window with their masks on, reported CNN. People on the streets captured the sweet gesture and shared it on Facebook where it went viral, gathering more than 80,000 views. The incident happened at a hospital in Castel San Giovanni, a town in Italy's northern Emilia-Romagna region.

Stefano Bozzini played a medley of love songs on his accordion for his wife of 47 years as she watched on from the second-floor window. Bozzini can be seen wearing a red sweater, navy pants, a feathered hat, and a mask as he played the accordion.  The 81-year-old started out with Spanish Eyes by Engelbert Humperdinck, before playing some of his wife's favorites. While the hospital itself doesn't treat patients with Coronavirus, the restriction still applies to the area surrounding the hospital which prohibited Stefano Bozzini from meeting his wife at the hospital. With senior citizens more susceptible to Coronavirus, extra precautions are taken in the case of elderly patients at hospitals.

As the person films the romantic performance, onlookers can be heard praising the man for his gesture. One person can be heard saying "bravo"  while another says, "how beautiful, this man is serenading his wife who is in the hospital." The couple married in 1973. Stefano Bozzini is a retired member of the Italian army's Alpini mountain infantry, according to the Italian news agency ANSA. The feathered hat that Bozzini wore is part of the Alpini mountain infantry's uniform. He was nicknamed the "Gianni Morandi of the Alpines" for always playing the accordion. Bozzini's daughter stumbled across the video and wrote on Facebook: "That is my daddy....the one and only." The pandemic has been a tough time for those who have loved ones in the hospital. In a heartbreaking incident earlier this year, Jihad Al-Suwaiti, a man from Palestine, climbed his mother's hospital window every day just so he could get a glimpse of her after she contracted Coronavirus. Jihad climbed the hospital window and watched over her, knowing full well that he wouldn't be able to spend time with her in the room because of the contagious nature of the virus.

The son of a Palestinian woman who was infected with COVID-19 climbed up to her hospital room to sit and see his mother every night until she passed away. pic.twitter.com/31wCCNYPbs

Jihad's brother, Abang Jihad Rasmi, told local media that Jihad, 30, was incredibly close to his mother and couldn't come to terms with her predicament. A hospital official had seen Jihad at his mother's window during his nightly visits, reported Bored Panda. "He spent most of his day there, observing his mother’s condition from outside the window, before coming down when he was convinced that his mother was fast asleep," the official was quoted as saying by the outlet. The heartbreaking image of Jihad sitting by his mom's hospital window waiting for her to fall asleep went viral on the internet, along with an illustration of Jihad sitting by the window watching over by his mother as an angel with wings. The illustration was the work of Safaa Odah, who wanted to capture the pain of losing a loved one while also reminding us they always continue to live within us.