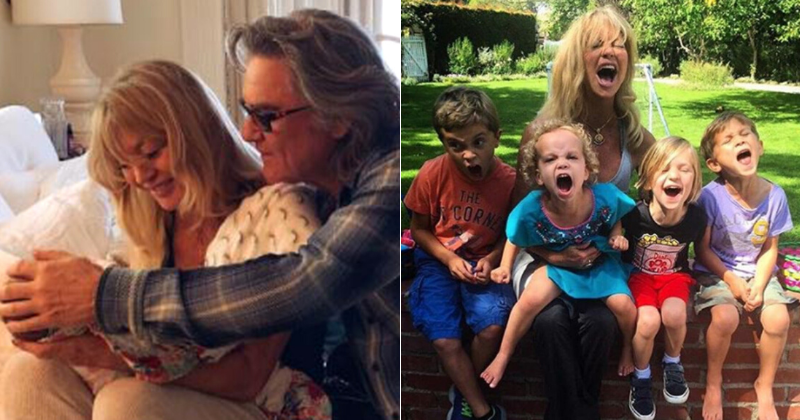 Goldie Hawn and her longtime love Kurt Russell celebrated with the whole family to celebrate Danny Fujikawa's 34th birthday. Kate Hudson, 41, and boyfriend Danny were spotted along with Kate's brother Wyatt reports Daily Mail. Kurt Russell, 69, wore khaki pants paired with a Hawaiian style short-sleeve button-up. Goldie Hawn, 74, looked stunning as always in a white off-the-shoulder top with a long floral maxi skirt. The couple, who have been together for over 37 years, were seen heading out of the restaurant Nobu in Malibu with two children who appeared to be the son and daughter of Goldie's son Oliver Hudson.

Goldie's daughter Kate Hudson, dressed in a sleek black slip dress with a belt, was seen with partner Danny who was carrying their one-year-old daughter Rani Rose. Danny and Kate have been together since 2016 but have long known each other for more than ten years! “He makes me feel beautiful every single moment of the day, even when we have fought,” the actress told PEOPLE. “I still feel loved. His devotion to the family unit makes me feel safe and confident and secure.” Kate also has two previous children from her relationships with Black Crowes singer Chris Robinson and Muse rocker Matt Bellamy. They are sons Ryder, 16, and Bingham, 8. “I don’t have a very traditional setup,” Hudson admitted. “And I have to say, I have zero regrets of my life. I’ve never defined myself through the way that a man sees me. But I can define myself in the unit that we can create together.”

According to TODAY, Russell and Hawn have six grandchildren. There's Rani (whose dad is Danny), Ryder (whose dad is Black Crowes singer Chris Robinson), and Brigham (whose dad is Muse singer Matt Bellamy). Goldie Hawn's son Oliver also has three children with wife Erin Bartlett: Wilder, 12, Bodhi, 9, and Rio, 6. Rani Rose will soon be calling the grandparents as they're known in the family as Gogo and Gogi. "She's unbelievably cute," Russell gushed about his granddaughter when he visited TODAY in November. "She is really adorable."

Popsugar shared a series of pictures of Goldie Hawn being a lovable, fun grandma. Whether she's goofing off with Kate's two boys, Ryder and Bingham, or she's getting on her hands and knees to help Oliver's kids, Wilder, Bodhi, and Rio find an Easter egg, she's so cute doing so! A family insider told Closer Weekly that the grandma couldn’t be more in love with daughter Kate Hudson and son Oliver Hudson‘s kids. “Goldie is the best Glam-ma ever. She and Kate are super close, but Goldie and Kate’s children, who all call her ‘GoGo,’ have a very special bond.”

The source also shared that Kurt Russell is just as laid-back when it comes to parenting their grandkids. “Anything goes at Goldie and Kurt’s home,” the source explained. “All the grandkids have a blast at GoGo’s and that’s made Kate and Goldie’s bond even tighter.” Not only is Goldie fun, but she's also responsible when it comes to her babies' babies. “Kate knows that when she drops her kids off at her mom’s house, or Goldie comes to hers, her children are safe and sound, learning and laughing. There’s no better feeling than that. Kate knows she’s blessed to have Goldie in her life and especially her kids’ lives.”  Kurt told Closer in an exclusive interview that the family loves spending the holidays together, "We always trim the tree on Christmas Eve and we have a big meal. After dinner, the grandkids put their pajamas on and hang up their stockings. We get the fire going and when it gets dark we always choose someone to read ‘Twas the Night Before Christmas.”

To hear Kurt Russell talk about Christmas Eve with Goldie Hawn and all the kids/grandkids sounds fantastic. I wish every family could celebrate the same way. Looking forward to the movie on Netflix. I have loved Kurt and Goldie my whole life.

Kurt even played Santa Claus himself in the Netflix movie, The Christmas Chronicles.  “I wanted to bring what was real about Santa from my family’s history,” said Kurt, who plays the jolly old man. The role is “dedicated to my dad,” he added. “He was just the most magical, fantastic Santa Claus figure. We never knew if Dad really was Santa Claus. Christmas was always shrouded in mystery and wonder.” Goldie Hawn will play Mrs. Claus in the sequel, The Christmas Chronicles 2. We really haven't got the chance to see them on screen since 1987's Overboard. So we can't wait to see their playful, warm chemistry in front of the screen again!