Cher Slams Trump: "He Loves Statues Of Slave Owners And The Murderer Of Native Americans"

Cher accused Trump of pushing blue states to declare bankruptcy and trying to bankrupt the US postal service. 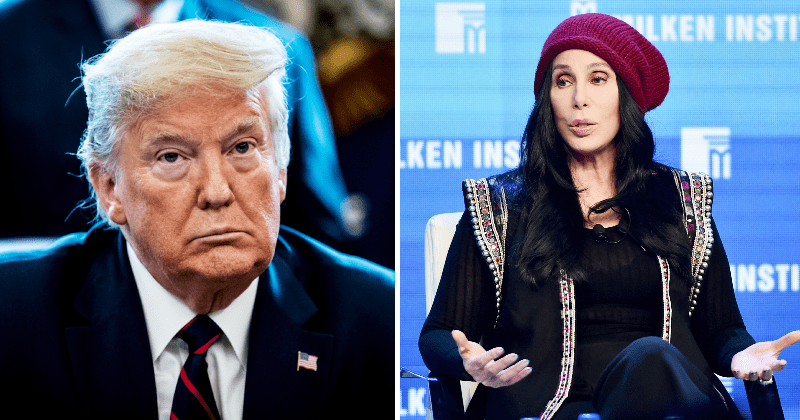 Singer Cher pushed the conspiracy theory that President Trump might be botching up the response to the coronavirus pandemic as a way to only save the white supremacists. Cher cited his love for historical figures, who enslaved Black people and ethnic cleansers, to claim that Trump may be targeting everyone outside his supporter base with a skewed pandemic response. She tweeted: What if Trump doesn't want to save "everyone" from the virus. No blue states, no people of color, no poor, no white liberals. What if Trump only wants (to save) Whites and White supremacists. He loves statues of slave owners and the murderer of Native Americans — Trail of tears Andrew Jackson.

Cher was referring to the vandalization of Andrew Jackson's statue outside the White House. Donald Trump had vowed to arrest and charge people who tried to destroy statues of historical figures on federal property. Donald Trump referred to the protesters "hoodlums" and said that they "don’t love our country." He promised to punish those attempted to topple or vandalize statues. "We are looking at long-term jail sentences for these vandals and these hoodlums and these anarchists and agitators and call them whatever you want. Some people don’t like that language, but that’s what they are," said Trump. "They’re bad people, they don’t love our country, and they’re not taking down our monuments."

“I mean, do you think Andrew Jackson was a good man?”

This is how you answer questions about honoring slaveholders 🔥(& how to flip a Q back on interviewer)#BlackLivesMatter #DCProtests pic.twitter.com/xMnbqMPN4R

Protesters targeted the statue considering Andrew Jackson's problematic past. The former US President was a slave owner and often referred to as the "Indian killer" for his role in the ethnic cleansing of Native Americans. Jackson signed the Indian Removal Act on May 28, 1830, which forced more than 60,000 Native Americans to leave their land, making way for colonizers, the White people, according to The Washington Post. The Native Americans were forced to walk hundreds of miles to resettle west of the Mississippi River, with more than 15,000 of them dying en route from exposure, disease, and starvation. "Established in the midst of a superior race, they must disappear," observed Jackson. Over 4,000 Cherokees died during their resettlement process, which came to be known as the Trail of Tears.

I think trump should be impeached for stoking The Fires🔥Of Hate that Has Lead to mass Shootings..HIS WORDS HAVE CAUSED DEATH, DESTRUCTION,,DESPAIR

Cher also claimed that Trump was targeting blue states and the US postal service to facilitate a victory in November's presidential elections."Trump wants blue states to declare bankruptcy. He wants the Post Office to go bankrupt so we can’t vote by mail," wrote Cher. Last month, she had hit out at the President over his handling of the Coronavirus. Cher had tweeted: Trump has access to every mask, shield, gown, glove, bed, ventilator, respirator, test kit, national guardsman, a soldier from army corps of engineers, nurses, doctors, techs, first responders needed to save the lives of coronavirus patients and caregivers. Trump is a liar and murderer. Open your eyes. She then deleted her tweet and admitted she had gone too far.

"I detest this president and everyone in his administration. I think they mishandled this, they lied and they are still lying," said Cher about the government's handling of the coronavirus. "I dislike [Trump] because I don't think he has a good or compassionate bone in his body." The Oscar-winner said it was the first time she was fearing for her life, reported Fox News. "I never thought there was any chance I would fear for my life in my own country and see something handled that's so deadly in such an insane way. Sure, shoot Clorox in your arm or put UV light into your stomach or take hydroxychloroquine, when everyone knows it can cause heart damage, stroke or whatever!"

Cher voiced her support for Joe Biden in the upcoming November elections. The singer said she knew he was an honest man way before becoming Vice-President and working with Barack Obama. “I like Joe. I’ve known Joe for a long, long, long time. I had a meeting once with him and I thought, ‘You know what? This is an honest man.’ It was way before he was with Barack Obama," said Cher, in an interview with Billboard. "We had a conversation and he was so painfully honest. At the end of it, I said, ‘You know, Joe? You can trust me, I’m taking things to my grave, but if I ask you a question and you answer it so honestly, you’re safe with me,’” she told him at the end of the conversation.