Barack Obama commemorated the 11th anniversary of the bailout which helped the US economy recover from the financial crash. 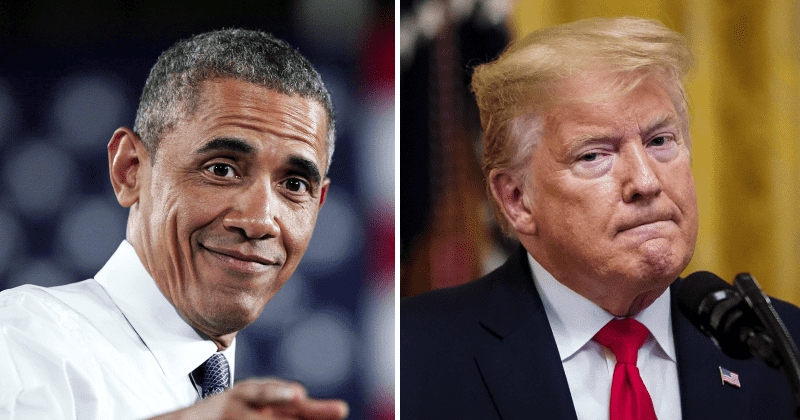 President Donald Trump accused his predecessor Barack Obama of trying to take credit for the economy's growth after the latter posted a tweet commemorating the 11th anniversary of the bailout handed out to banks. Following the financial crash in 2008, Barack Obama started his Presidency with America facing one of the worst recessions in decades. Barack Obama would sanction $787 billion to bail out the banks and put the economy back on track. The former President said the American Recovery and Reinvestment Act helped pave "the way for more than a decade of economic growth and the longest streak of job creation in American history," reported Fox News. Trump who always sees himself be compared to Obama lashed out at the former President claiming that he "had the weakest recovery since the Great Depression." He then went on to claim that he had to rebuild the military which was left depleted by Obama. Trump tweeted: Did you hear the latest con job? President Obama is now trying to take credit for the Economic Boom taking place under the Trump Administration.

Eleven years ago today, near the bottom of the worst recession in generations, I signed the Recovery Act, paving the way for more than a decade of economic growth and the longest streak of job creation in American history. pic.twitter.com/BmdXrxUAUf

The Trump campaign also took aim at Obama, claiming that Trump was the reason behind the economy's gains in recent years. “Obama and Biden orchestrated the worst economic recovery in modern history. By contrast, though, deregulating, lowering taxes, and supporting free-market policies, President Trump has created the hottest economy on record,” said the Trump campaign national press secretary Kayleigh McEnany. "It’s no wonder Democrats seek to take credit for the Trump economy after eight years of betraying blue-collar workers and inflicting pain upon the middle class as Americans everywhere suffered.”

Eleven years ago today, near the bottom of the worst recession in generations, I signed the Recovery Act, paving the way for more than a decade of economic growth and the longest streak of job creation in American history. pic.twitter.com/BmdXrxUAUf

While Obama was referring to the growth of the economy spread across 11 years starting from the financial crash, Trump didn't want to give any credit to Obama and claimed that it was his 3 years at the White House that spurred the economy. Trump's claims a week after he cited "national emergency or serious economic conditions" to justify a reduced pay raise for civilian federal workers. Trump compared the state of country's economy to a national emergency to deny scheduled raises for federal workers. Trump argued that the anticipated 2.5% pay raise was reduced to "maintain efforts to put our Nation on a fiscally sustainable course." Despite inheriting an economy that was facing the full brunt of the depression, Barack Obama added 8.1 million jobs in his last 36-months at the White House. Trump, on the other hand, had added only 6.6 million jobs during his first 36-months as President, reported CNN. Obama also outweighs Trump when it comes to average monthly gains, adding 224,000 jobs a month in his last 36 months as opposed Trump adding only 1,82,000 jobs a month on average.

It's not the first time Trump has blamed Obama for his own failures. After instigating an attack against Iran, Trump blamed Obama for Iran's retaliation against the US troops. "The missiles fired last night at us and our allies were paid for with the funds made available by the last administration," said Trump. He also claimed that Obama's deal had funded Iran with $150 billion and an additional $1.8 billion in cash, which he claimed was being used to fund a "terror spree" in the Middle East. "Instead of saying thank you to the United States, they chanted 'death to America.'" Trump was referring to Iranian lawmakers chanting "Death To America" in its Parliament chamber.

Trump's efforts to blame Obama was shot down by Hesameddin Ashena, an adviser to Iranian President Hassan Rouhani, who tweeted: We have ZERO problems with the American people. We even achieved deals with previous US administrations. Our sole problem is Trump. In the event of war, it is he who will bear full responsibility.