Even though it's been months since the former POTUS left the White House, it hasn't prevented the Ocean's Eleven actor from continuing his criticism for him. 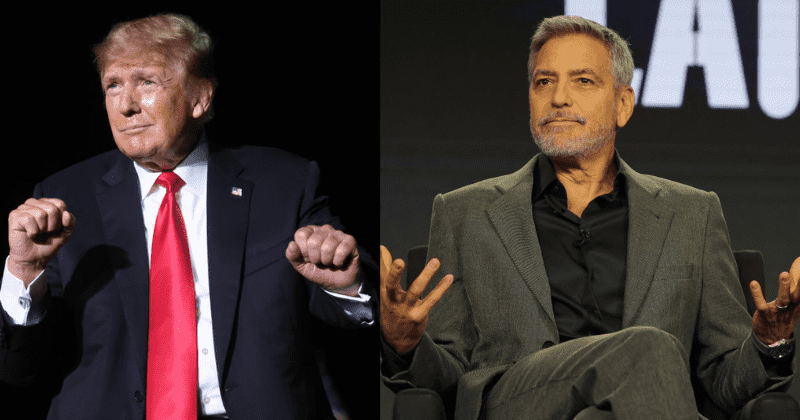 George Clooney has never been a fan of Donald Trump and has made it a point to make his feelings regarding him very clear over the years. Even though it's been months since the former POTUS left the White House, it hasn't prevented the Ocean's Eleven star from continuing his criticism of him. While promoting his new movie The Tender Bar during a recent BBC interview, Clooney commented on the absurdity of Trump becoming the Commander-in-chief of the country. The conversation about the 75-year-old began when Clooney was asked if he had plans of pursuing political office as his second career. "No," he said turning down the idea, "because I actually would like to have a nice life."

The longtime supporter of U.S. President Joe Bide then went on to describe America as a country that still trying to rebuild following the damage caused by Donald Trump. While discussing Biden's plummeting poll numbers with BBC's Andrew Marr, Clooney explained that the current President was struggling with Trump's legacy. "It’s like taking a battered child and thinking everything’s going to be OK his first day in school," he explained. "There’s a lot of things that have to be repaired, there’s a lot of healing that has to happen, and it’s going to take time."

The Up In The Air actor then revealed how he had met Trump before his own foray into politics and added that he most definitely isn't Oval Office material. "It’s so funny, because he was just this knucklehead," he shared, according to The Hollywood Reporter. "I knew him before he was a president. He was just a guy who was chasing girls. Every time you went out he’d be like, ‘What’s the name of that girl?’ That’s all he was." He also expressed his shock at the fact that there exists a "whole group of people that they think he’s the champion of," but don't know that Trump simply "can't stand" those people who worship the path he walks on.

When asked what he thought about Trump's possibility of running for President again, the actor and director said that the Florida man would continue draining his political bid for as long as he can, reports Daily Dot. The fact that Trump still remains a factor in today's politics doesn't still well with Clooney, who hopes that Americans would have "a little better sense" than to vote him back into the White House. This is only the latest comment that Clooney has made against Trump. Back in 2017, when Daily Beast asked him if he saw himself as a member of the "Hollywood elite" that Republicans loved to denounce after being attacked by Trump he had a befitting answer.

This truly made my day. Pls read. Truly, an all American answer from a great American, George Clooney. pic.twitter.com/GMW3xjSQat

"Here’s the thing: I grew up in Kentucky," he noted. "I sold insurance door-to-door. I sold ladies’ shoes. I worked at an all-night liquor store. I would buy suits that were too big and too long and cut the bottom of the pants off to make ties so I’d have a tie to go on job interviews. I grew up understanding what it was like to not have health insurance for eight years." He added, "So this idea that I’m somehow the ‘Hollywood elite’ and this guy who takes a s**t in a gold toilet is somehow the man of the people is laughable." Next, he noted that Trump's entire company is many up of only 12 people and the additional ones that he needs are hired out as contractors who often don't get paid for their work.

Clooney revealed that he's had to work with more people (than Trump) as a director. [I worked with] seven different unions all wanting different things," he said adding how this takes a real "man of the people" to make it work. "I just look at it and I laugh when I see him say 'Hollywood elite,'" he remarked. "Hollywood elite? I don’t have a star on Hollywood Boulevard, Donald Trump has a star on Hollywood Boulevard! F— you!"