A family in Wairewa, Australia, returned to their house to find nothing left of their property. When their dog, a golden retriever named OJ, rummaged through the ashes, he miraculously found his toy. The family later also found a wedding gown. amidst the destruction. 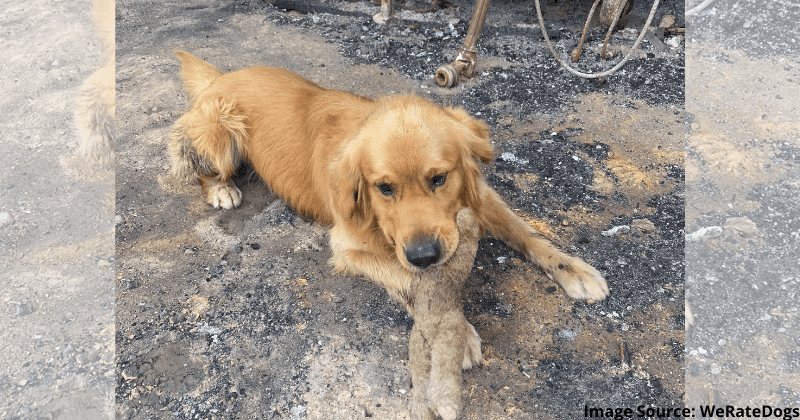 The bushfires in Australia have brought enormous death and destruction. The fires that have been raging since September last year has led to the loss of thousands of hectares of forests, irreparable damage to wildlife and the ecosystem and millions of dollars in property loss. For the families in Wairewa, Australia, it was total devastation. One of them, the Zagami family had their entire property burned to the ground just like many others in their town. When they came back, the fires had ravaged everything and there was nothing but ashes. When their dog, a golden retriever named OJ rummaged through what was left, he found his favorite toy, that miraculously survived.

This is OJ. After safely evacuating, him and his family returned to their home in Wairewa, Australia yesterday to find it entirely destroyed by the fires. But amongst the rubble, OJ found his favorite toy had survived. 14/10 never letting it go again pic.twitter.com/gx3d0P5349

A local reporter named Louisa Cheatley also tweeted about it and wrote: OJ” returned to his Wairewa home today that was completely destroyed by fire. He found his favourite stuffed toy in the rubble. As the family looked through the devastation, they discovered another item that made it. It was Matt Zagami's wife, Katie's wedding dress. While they are happy at least somethings escaped the fires,  they know that the road to rebuilding their lives is going to be tough.

According to The Dodo, Zagami said, "Every day we get reminders — every hour we get a reminder of what we lost and what we haven't got anymore, and we have found it really hard to be here and look at it."  Speaking about the devastation, he told ABC Gippsland, "We left here last Monday just after lunch thinking we'd come back to our house the next day and everything would be alright. But we found out earlier that morning that we'd lost our house and, more devastating, we'd lost everything. The house, sheds, farm … it burnt through everything. It's just bloody devastating … to have everything taken away in one hit. The farm is one thing, but we lost everything in the house — everything."

According to the Wairewa Fire Brigade, the town took a complete hit. In a Facebook post, they stated that at last 11 houses were gutted in the flames, and added that were a number of "injured & dead animals" while "internet & phones are down so communication has been extremely difficult." Fortunately, though, there was no loss of human lives or serious injuries.  "Tragedies like these will bring out the best in people & unfortunately we have seen it bring out the worst in a tiny minority. The community is rallying together to clean up, recover & support each other. If you are worried about your family & friends, we are ok. Shaken & exhausted, but ok," the department added.

It added, "If we don't respond, it's most likely a communication problem. Hopefully, we can give some uplifting updates soon." The post concluded with a warning, "Please remember that the bushfire danger is not over. Be vigilant & listen to advise."