Dog Tragically Dies After Eating Brownies With Sugar Substitute, Owner Warns Other Pet Parents Xylitol Is Toxic For Them

Dogs can't resist sneaking a treat. For Kate Chacksfield her Vizsla named Ruby, it proved to be a fatal act because the brownies she ate contained xylitol instead of sugar. 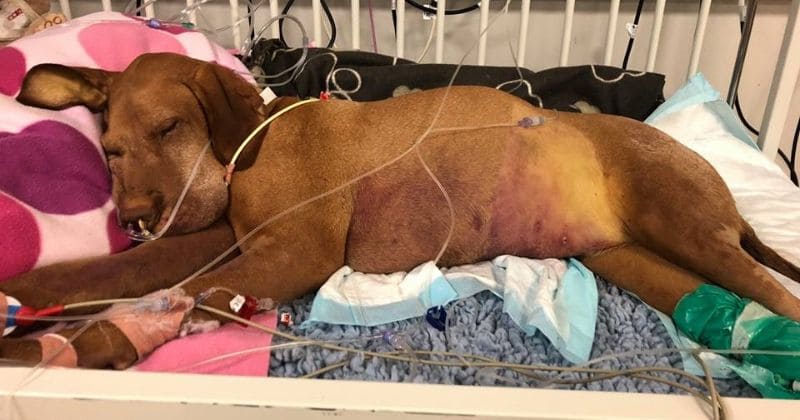 The only thing more devastating than losing a pet is knowing that you could have prevented their death. According to People, dog owner Kate Chacksfield is beside herself with grief after her beloved dog Ruby passed away after consuming brownies sweetened with xylitol. Based in West London, England, Chacksfield is now using her pain to help educate other pet owners of the dangers of the natural sweetener. Ruby, like most dogs, could not resist sneaking treats from time to time, even those she was not allowed to. Brownies were something Ruby has broken into in the past, but they never made her sick although chocolate is supposed to be toxic for dogs. The small amounts of it never really had a negative effect on Ruby, a Vizsla. But, this time the dog ate two whole brownies whose xylitol content made her sick in just thirty-six hours. If Chacksfield had known of xylitol's potential dangers, she would have rushed Ruby to the vet far sooner.

Xylitol is an alcohol-based natural sugar substitute commonly used by those looking to shed a few pounds. It has far fewer calories than sugar which prompted Chacksfield to swap out sugar for the seemingly healthier option in her brownies this time around. Had she known how toxic it was for dogs, she would not have had to say goodbye to her beloved pet. Dogs who ingest xylitol can suffer from a variety of symptoms if not all. Low blood sugar, liver failure, seizures, and in the worst case, death can all be caused by the seemingly harmless low-calorie sweetener making it among the top human foods to keep out of reach of dogs.

Chacksfield rushed Ruby to the hospital as soon as she noticed that her Vizsla was ill but sadly was too late.  The damage has already been done and Ruby's condition began to deteriorate rather quickly. For eight long days, Ruby suffered and struggled but eventually succumbed to the symptoms induced by the xylitol, leaving Chaksfield with a broken heart racked with guilt and a staggering veterinary bill that totaled nearly $13,000. Chacksfield confessed, "I had no idea how serious eating natural sweeteners was for dogs, the photos of her on life support still make me cry."

Chacksfield shared that if she had known how toxic xylitol was, she would have not have wasted a single second and taken Ruby to the vet as soon as she noticed the missing brownies. Instead, precious hours were wasted until Ruby began to show symptoms of liver failure. That's when Chacksfield realized this was no ordinary bug and raced her precious pet to The Royal Veterinary College in London. Unfortunately, it was too late by then. "I only made brownies with Xylitol in to reduce the amount of sugar I was eating," said the grieving owner.

If you aren't aware of the things that can make your pet sick, it also makes it harder for the vet to start treatment. Dogs are known to scavenge and ingest things they really should not, and this is what Chacksfield believed Ruby did too. "We just thought she may have eaten some by mistake in the park or something – it never crossed my mind to mention the brownies," she revealed. She is now desperately trying to turn her personal tragedy into a teachable moment for other dog owners and is hoping to spread awareness on the subject.

It is a painful way to lose a pet. As sweet as dogs are, they often can't help themselves around treats and do not know any better. If you are a pet owner educate yourself on all of the things your pet could possibly have a dangerous reaction too and keep it far out of their reach. Take care to leave a list out as well for others who may be alone with your dog or come to look after it. There are more ingredients than one that is harmless to humans but are actually extremely toxic to dogs. Which is why it is important to be vigilant because dogs being dogs will always try to sneak a bite when you are not looking.

"It takes just a quarter of a teaspoon of sweetener to harm a dog," Chacksfield added. The potentially fatal ingredient can be found in several sugar-free products including gums, sweets, and spreads including peanut butter. Make the effort to read labels and ensure that nothing that can harm your pet is in it before sharing any of your food with your pets.  People Pet Vet Dr. Evan Antin shared that grapes, raisins, onions, garlic, raw meat, raw eggs and surprisingly even macadamia nuts are all toxic to dogs and could even lead to their death. If you have even the slightest doubt that your pet is sick because of something he or she ate, don't waste time and take them to the vet immediately.