The incident occurred on the streets of Bogota on November 1 after the dog was seen struggling to move in a terribly unsettling video. 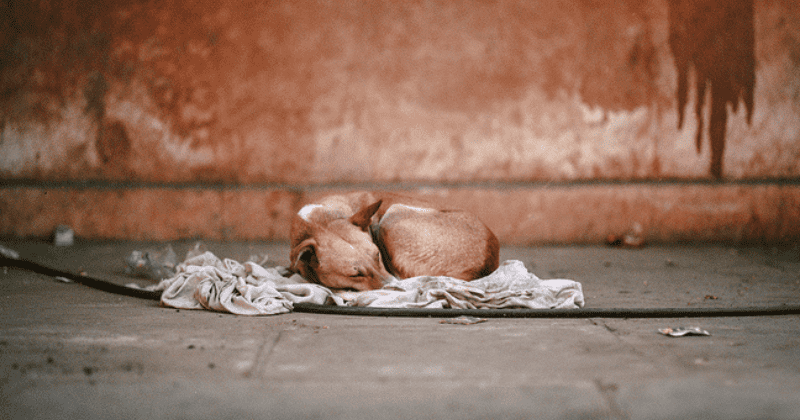 A dog with horrific injuries has died after it was gang-raped and stabbed over 30 times. The incident occurred on the streets of Bogota, Columbia on November 1 with a video showing the dog struggling to move in a terribly unsettling video. Concerned passersby placed a sack under her bleeding body. She was soon rescued and taken to the vets to receive emergency treatment Daily Star reports. The dog had recently delivered a litter of puppies when the horrible incident took place. Marta Buitrago, took the dog to the vet and spoke to El Tiempo, a local newspaper, stating that the dog appeared injured and very weak.

Another woman named, Liliana Guerrero, shared pictures and videos on Facebook and said the dog "was stabbed many times and sexually abused by several people." She wrote that the dog resisted and was stabbed as a result. "Because she wouldn’t allow it, they stabbed her," and said she died of the injuries. "They destroyed her genitals, stabbed her almost 30 times, punched her, and caused other superficial injuries," Guerrero continued. "The dog could not cope with the amount of pain." Guerrero also stated that she was unable to convey the "enormous sadness and helplessness I feel" after the dog's horrific death. The unnamed dog isn't the only die to die of such a horrific case of bestailty. The incident occurred in the municipality of Quinchia but it is unclear if the authorities investigated the matter.

Social media denizens were angered by the despicable humans who targeted the harmless dog. Elvin Crak wrote: "I thought this was a joke when I stumbled on it at first, but it still beats my imagination to think how a dog is been stabbed and gang-raped...who carried these bloody act on her, dogs??" Ndubuisi Gabriel added: "This is sickening." Violence against dogs is neither new nor uncommon across the world. A man in Spain cruelly shot a dog in the head and was then filmed dragging her by the neck with a rope on the road while she was still alive reports the Daily Mail. People were aghast at the vile action and called for the maximum punishment for the man. The incident occurred in Galicia, in northwest Spain. Ramon Feijoo, who filmed the mistreatment with his wife Virginia Gonzalez, got into an argument with the cruel man. It seems the man is the owner of the dog and the reason for his actions was because the dog had given birth to a litter of pups. The man is seen dragging the limp body of the dog named Alma in the video.

The utter depravity of certain humans never fails to stun me. I know what should be done to these men but human rights would get in the way 😡😡😡

He is heard saying he is taking the dog to his home. He then stops and shouts, "Stop filming me," to which Feijoo replies, "What you are doing is inhuman, I'm not filming you, I'm filming the animal and what you're doing." Later speaking to a local channel, Gonzalez said, "We heard a shot and then a dog barking and saw this man with a gun. He said he was taking the animal home, that he was a hunter, and that he could do it. When we said we were going to call the police he started to drag it along the ground with a rope around its neck. My husband began to film him because we didn't know what was going to happen."