2-Yr-Old Puppy Dies After He Ate Rocks To Survive. Cruel Owner Chained Him With No Food, Water

David Neanover had left his dog chained and left it to starve and die last year but has received a sentence for this crime. 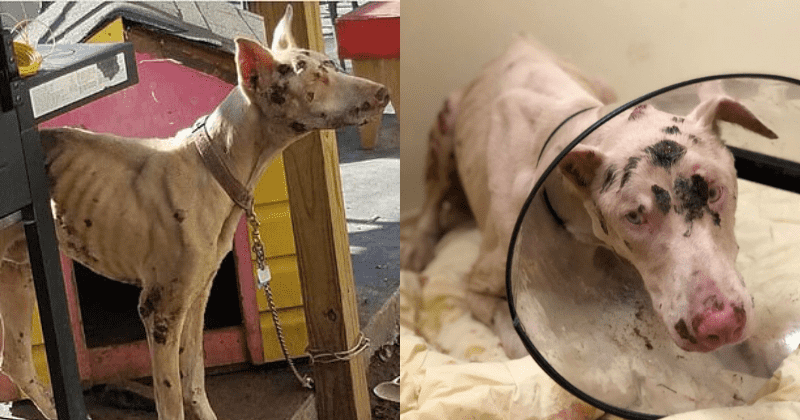 They say dogs are a man's best friend and that's usually the case. Give them some food and show them some love, they will be your best companions for life, come hell or high water. However, this doesn't quite apply to this Ohio man who let his 2-year-old Doberman starve to death. According to the Daily Mail, the terrible part of the ordeal was the pupper was so hungry he ate rocks to keep himself alive. Thankfully, David Neanover, the man behind the heinous crime, has finally received the justice his actions deserved as a court sentenced him to jail on Thursday, May 7. Judge Robert Lyon of Butler County Court slapped Neanover with two counts of misdemeanor cruelty to a companion animal over incidences that occurred in 2019.

Feel free to give David Neanover what he gave poor Lou who he abused and starved.

Dog ate rocks while being starved to death by 'Lucifer-like owner' https://t.co/mNnkL42sg2 @MailOnline

Neanover will now serve a 180-day sentence—180 days for one sentence and 90 days for the other to be served concurrently—at the Butler County Jail. Along with the jail term, he has been ordered to pay $2,598.18 in restitution to the dog’s caregivers and a further $1,500 fine and court costs. During the hearing which took place on Monday, a letter written by a concerned party urged the judge to bring the torturous owner to justice. “I am asking for the full extent of the law," the letter began. "To let a sweet, innocent soul live in filth, no food or water, no love or kind treatment…(Neanover) even named him Lucifer when in actuality, this person should be called that. If I was a judge, these people who abuse animals would get to experience what they did to animals. Animals are just baby souls in different bodies," the letter continued.

The 36-year-old's defense, meanwhile, attempted to have the sentence thrown off altogether and argued that his privacy rights were violated when the deputy dog warden entered the yard to seize the dog without a warrant or prior consent. The judge overruled the argument and went ahead with the sentence. Despite the jail term, many feel the punishment is way too short and lenient than what he deserved with some even criticizing the judge for it. Offering an explanation to this, a Journal News report reveals that the defense had pointed out back in June that the dog's death was due to a pre-existing illness and not straight-out negligence which may have weighed in on the juror's minds when suggesting the sentence.

A peaceful protest has begun outside the Oxford Courthouse against animal cruelty. David Neanover is charged w cruelty to a companion animal after the tragic death of his 2 yr old Doberman. Neanover is being arraigned today. pic.twitter.com/P6j34bWAsv

The case of abuse hit the news when local police received several anonymous dog abuse complaints in April 2019. When dog wardens acting on the complaint went to check the dog out, they found Lou (the Doberman) was left with no food, water, and worse, it was covered in several open wounds. The volunteers then took the puppy to the Animal Friends Humane Society in Hamilton for an X-ray and found that it had eaten rocks to quench the starvation. They also found that the dog's tongue had an ulcer which limited it from consuming food. Speaking after the scans, Animal Friends Humane Society was quoted by USA Today saying: “X-rays showed rocks in his stomach. This we did not expect, but we are not surprised. He lived his life on a VERY short-chain and was deprived of food for quite some time, so we’re sure he got to the point where he was willing to eat anything that he could get his mouth on. He is missing a chunk of his tongue."

Sheriff Richard Jones, who spoke about the incident last year, said: “No normal human being could look at this dog and think this is acceptable. The pictures are hard to view. It’s much worse in person. Animal Friends will do everything they can to save this poor animal but the current condition is very bad. I am thankful that this was reported. I just hope he can be saved and adopted to someone who cares.” The dog later died due to a combination of injuries, starvation, and physical weakness.

According to Daily Mail, Neanover also pleaded guilty to one charge of domestic violence for which he was sentenced to jail for 180 days. He will serve this concurrently with the animal cruelty sentences.

Ohio: 180 days in prison for starving this poor puppy, who had rocks in his stomach, to death & domestic violence, after pleading no contest. It should have been 5 years! I hope everyone in prison knows what he did. 🤬
Read this one Guys https://t.co/kI0jOnuqw1