Joe DiMeo, 22, had suffered 80 percent burns on his body after he met with an accident in 2018. Two years later, he noted that he got a second chance at life following a successful surgery 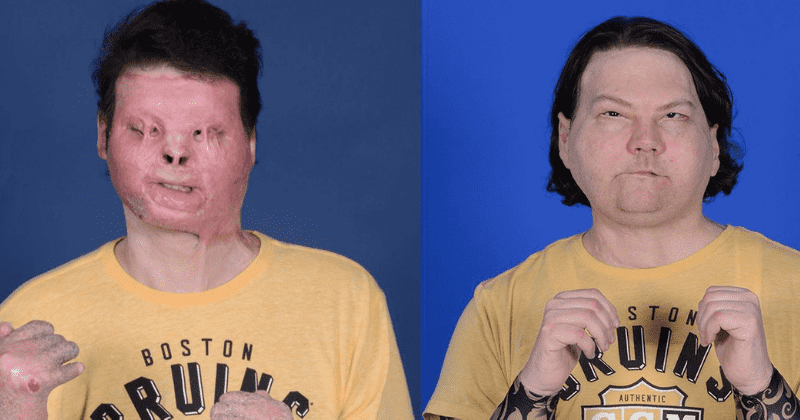 Joe DiMeo, 22, from New Jersey became the first person in the world to have a new pair of hands and a face successfully transplanted on him reports CNN. Holding a written statement on Wednesday, following months since the surgery and weeks of rehabilitation, he spoke of his experience. "I want to share my story to give people hope in the world. I'd like to recognize the selflessness of my donor, and how none of this would be possible without his sacrifice. Thank you." DiMeo said. When asked how he felt after the transplant, he felt as if he had got a "second chance at life." He noted, "There's no excuse to not be motivated, or not to do my therapy." While his hands are not fully functional, DiMeo said there is still some time till his full recovery.

Plastic surgeon Dr. Eduardo D. Rodriguez—in collaboration with a team of over 140 staff—performed the world’s first successful face & double hand #transplant on Joe DiMeo, a 22-year-old man who suffered burns to 80% of his body after a car accident. More: https://t.co/TvikMhxPiU pic.twitter.com/RP27CIs6tj

"My hands aren't there yet. I have to keep practicing. It's kind of like when you're a baby, they're just moving their hands all the time until they get that ability to do stuff. I've got new hands now, just like them. There's always light at the end of the tunnel. You never give up," he said. The surgery took place across six surgical teams and 80 people in two adjoining rooms. "He's the most highly motivated patient I've ever met," said Dr. Eduardo Rodriguez from the NYU Langone Medical Center. He was the head of the team that performed the surgery.

The three faces of the incredible Joe Dimeo. Recipient of the world’s first successful face and hands transplant. Surgery at and pix from @nyulangone. We tell the amazing story on @5_News today.
Joe: “There’s a million ways to be happy. You’ve got to find the good in the bad”. pic.twitter.com/rlWiaBn5mZ

In 2018 when he was 20 years old, DiMeo got into a nasty accident while driving on a highway in his home state. He had fallen asleep at the wheel and lost control of the car after he hit a curb. The car flipped and burst into flames while he was still inside. A passerby managed to pull him out before the car exploded, but DiMeo had already suffered burns on 80 percent of his body that also left his hands and face disfigured. The surgery took 23 hours. A donor's hands and facial tissue were carefully removed and replaced with 3D prosthetics in one room, while in the other, preparations for the donor tissues were made while DiMeo's own hands and face were removed with precise cuts. "We always begin the operation with a moment of silence to honor the donor family, to respect their great loss, to never forget the donations that have been made," said Rodriguez.

At 22, Joe DiMeo is rediscovering a range of sensations after he had a face and double hand transplant pic.twitter.com/2Dcy1yeCji

To prepare DiMeo for the new limbs, "each radius and ulna bone was carefully cut, along with a host of tendons, muscles, veins and nerves." Rodriguez said,  "We have to replace 21 tendons, three major nerves, five major vessels, two major bones," noting that each structure had to be labeled to ensure proper reassembly. They first worked with the right hand, followed by the left. When it came to DiMeo's face, small plates were put on his chin to help attach his new face, and the bridge of the donor's nose was grafted on to his new face. It involved the meticulous splicing of nerves and vasculature to bring blood and feeling to the new tissue. Then a final stitch was made after 23 hours. Although the surgery was performed back in August, doctors waited till after Dimeo's rehabilitation — 45 days in intensive care and 2 months of inpatient rehab — to call it a success. Hand transplants and face transplants individually are not new procedures.

I wish him well. It's difficult to comprehend the terrible circumstances that led to that surgery. May the wind be at his back ... and thanks to the surgical team for providing this chance at a new life.

"There have been over a hundred hand transplants performed successfully, and close to 50 face transplants. So fundamentally there was no reason why they couldn't occur together, successfully." But two previous surgeries of both the hand and the face ended in failure. However, this was the first time, that this surgery was a success. "Joe is healthy, he's young, he's strong, he loves to exercise, he eats healthy, and he had that one special element which is going to be required for this operation. A high level of motivation. And he had a tremendous sense of hope," added Rodriguez.