Leonardo DiCaprio is also said to be one of the people petitioning for the release of the animals. These sea creatures have been facing harsh conditions in captivity and are likely to be released to their natural habitat. 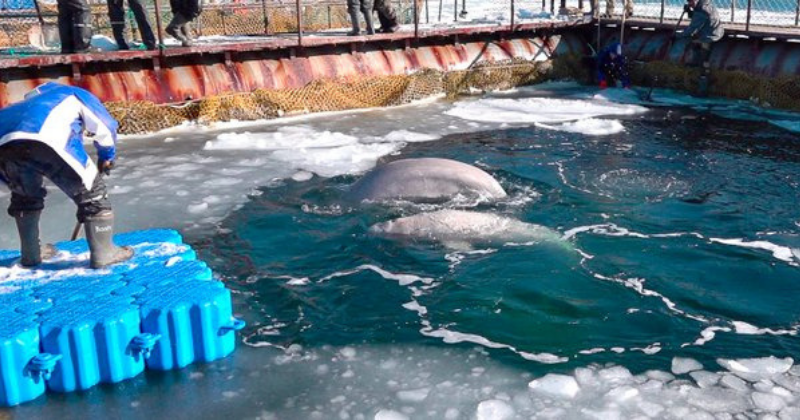 Animals are meant to be free and to live their lives in their natural habitats. Man often tries to capture them for commercial activities, creating a business out of their lives. This loss of animal freedom is devastating not only to those in captivity but also to their natural ecology. Earlier this week, officials in Russia ordered the release of 100 captive orca and beluga whales after tireless efforts from actor Leonardo DiCaprio and his fans. The whales were held captive in cages in Russia’s Far East. Pictures of the captive whales were recently released. The pictures revealed that the animals were being held in very cramped enclosures on the Pacific coast, near the Sea of Japan port town of Nakhodka. According to officials at Kremlin, five baby walruses, 11 orcas, and 90 baby belugas were held captive in terrible conditions by the owners who were planning to sell the animals to Chinese aquariums. Reports suggest that the whales were not just living in cramped spaces but were also not treated right.

The news about these whales being held captive first appeared last year. It followed a wave of criticism from the wildlife conservationists from across the world, various government officials, and even actor Leonardo DiCaprio. Russia's federal security service (FSB) is said to have brought charges against four companies for breaking fishing laws. The release of the whales has been ordered. However, they are still stuck in whale prison as the authorities are still trying to follow protocol to have them all released. The problem lies in trying to release the whales without causing them any harm, as reported by Reuters.

Kremlin spokesman Dmitry Peskov said last week that President Vladimir Putin had personally stepped in to handle the matter. “We are doing everything we can,” said Ecology Minister Dmitry Kobylkin as cited by TASS news agency on Thursday. According to the reports of the FSB, the animals are kept in unsatisfactory conditions and need to be released back into their natural habitat immediately. “No one objects to releasing the orcas, but the most important thing is to release them properly,” continued Kobylkin.

One of the main obstacles in their safe release is the cold weather, according to Kobylkin. Actor Leonardo DiCaprio shared a petition to release the whales on his social media accounts. He requested all his followers to sign the petition and show their support. The actor has 19 million followers on Twitter, out of which 900,000 signed the petition to support the release of the animal. Actress Pamela Anderson posted an open letter to Putin on her website. News about the ‘whale jail’ near Nakhodka, the icy conditions, and the suffering of the orca and beluga whales is causing international concern, she wrote.

Matters have been complicated further as Russia has no direct ban on the catching of such animals, Kremlin spokesman Peskov said last week. They can be caught, in specific circumstances, for scientific and educational purposes. The companies earlier mentioned that they had permission to capture 13 Orcas within a year. However, the local prosecutors looked into the matter to find any legal documents granting the companies permit to catch so many whales. The International Whaling Commission adopted a moratorium on commercial whaling in 1982. However, Russia and Japan notably oppose the moratorium. It is believed that many of the whales held in the Russian port town are juveniles or infants to fit that number within such small enclosures.

China has over 60 marine parks and each of them has a special exhibit to display whales. Each Orca is sold for around $6 million, making the whale trade a very lucrative business. A majority of the animal trade that places in the world is illegal. Humans do not own the rights to the lives of these animals. Most times, animals are kept in very bad conditions before they are sold. Many times, they contract diseases or have other health issues because they are not fed enough or kept in clean environments. However, the market for animals, especially whales is constantly increasing in China as the population visiting marine parks has increased.

Orcas are also known as killer whales and belong to the dolphin. They are known to be one of the smartest marine animals. They even teach their offspring advanced communication skills, including the ability to "talk" to dolphins by learning the language of other species. Five walruses were also among the captive animals. The walrus is a large flippered marine mammal. It is the only living species in the family 'Odobenidae'. They also have two large and prominent tusks that are also said to be in demand in illegal trade markets. The beluga whale is also known as the white whale and is one of the smallest of the whale species. Belugas are usually identified by their color and their distinctive foreheads. They are also known for being able to mimic a variety of sounds.

Animal trade needs to stop. Like us, they also deserve to be free. They were born in the wild and must remain in their original habitat. The world is close to witnessing its sixth mass extinction and the only way to prevent it is from maintaining natural habitats and providing animals with a clean ocean. The main reason behind extinction is hunting/poaching and loss of habitat. Marine parks may try to mimic its exhibits' natural habitats but it is a feeble attempt and will never be a replacement to the rich, mystifying ecology of the ocean, where these creatures belong.