The 25-year-old woman was struck and killed by lightning during severe thunderstorms that battered the state of Victoria in 2017. 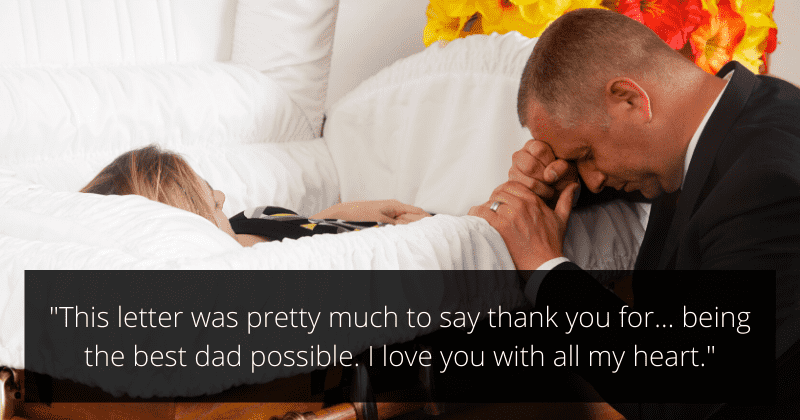 A devastated father broke down in tears at his beloved daughter's funeral as he took comfort in the last handwritten note she'd left him. Having lost his daughter Lauren Brownlee in a freak lightning accident, the bereaved dad from Australia recited the letter in front of hundreds of mourners at the service held at the Alan Harris McDonald funeral home in Wagga Wagga. Lauren —a real estate agent from Melbourne— had penned the letter six years before she was struck and killed by lightning during severe thunderstorms that battered the state of Victoria in 2017.

According to Daily Mail, Lauren had left the letter for her father Glenn when she left her hometown in regional NSW and moved to Melbourne. In the letter, she thanked him for raising him the way he had and said she was looking forward to returning home and spending Christmas with him. "This letter was pretty much to say thank you for … being the best dad possible. I love you with all my heart," she wrote in the heartfelt note, reports The Age.

Speaking of his emotional state after reading the letter following his dear Lauren's death, Glenn said, "It got the better of me, got under my skin, that she has appreciated everything." Although she moved to Melbourne for better career prospects, her family remembers Lauren as a country girl at heart who missed her loved ones back home at the Rock, near Wagga Wagga in New South Wales. Around 150 good friends, colleagues, and family members attended her funeral, sharing their favorite memories of her. Known for her bubbly personality, Lauren's coffin reflected who she was with its vibrant colors and bright designs.

Lauren, who was 25-years-old at the time of her death, had been storm watching with her boyfriend Ben Hollow when the couple was struck by lightning. They were discovered by Brandon Cleine as he was driving home during the electrical storm. Spotting a man lying in the middle of the road in Chirnside Park in north-east Melbourne, Cleine pulled over to find Lauren going into cardiac arrest and Hollow with serious burns to his legs. Desperately trying to save Lauren's life, he then spent the next several minutes performing CPR on her.

Lauren Brownlee, the young woman fatally struck by lightning during recent storms, has been laid to rest at a funeral in Wagga Wagga. #9News pic.twitter.com/YZXtuko913

"I was just hoping that she stayed alive... And I was just screaming at the lady on the phone like 'Please just get emergency services here as quick as possible. These guys are in desperate need,'" Cleine revealed. Although Lauren was taken to a hospital just before 9 pm, she succumbed to her injuries later that night and passed away. "I just wish she would have made it, you know? It's tragic. I can still picture her lying on the ground, I can still see Ben lying on the ground. I can still see her face. I'll never get that face out of my mind," Cleine lamented.