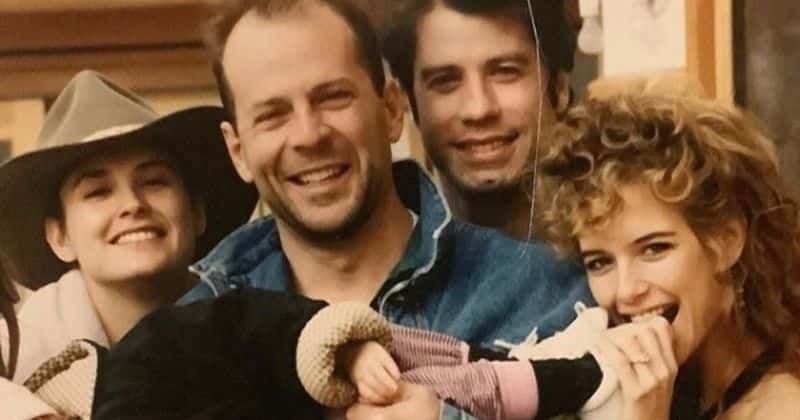 Demi Moore honored the late Kelly Preston by sharing a sweet throwback picture. The laidback photograph featured Preston and her husband John Travolta goofing around with Moore and her ex-husband Bruce Willis. Willis can be seen with a child in his arms, possibly his eldest daughter Rumer, while Preston jokingly bites into her foot. Their partners are smiling in the background. Both couples were said to be Hollywood's biggest power couples in the '80s and '90s reports PEOPLE. Moore captioned the image:
The world has lost one of the most beautiful, kind, generous, tender-loving souls that has graced this earth. Rest easy @therealkellypreston, we will miss you. Celebrities like Gwyneth Paltrow commented under the post: 💔💔💔So tragic!! and Kate Hudson shared emojis: 😔💫

Preston was particularly popular for her role in the 1996 film Jerry Maguire which starred Tom Cruise and Renée Zellweger. Cameron Crowe, who directed the film told PEOPLE exclusively, that the actress "was one of the best-kept acting secrets in movies when we gave her the role in Jerry Maguire. It was her second act as an actor," the 63-year-old director said. "She had done lighter stuff with gusto, but it was clear she had much more to say and do in her career. She’d come close on some big parts, but we were lucky to get her when she was ready to fire on all cylinders … and that she did."

Kelly Preston, known for her roles in 'Twins,' 'SpaceCamp,' 'Jerry Maguire,' and more, has died aged 57 of breast cancer

Olivia Newton-John who is famous for her role as Sandy in the iconic musical Grease with John Travolta too has been battling cancer for years. The actress is well aware of the struggles of the disease. The 71-year-old expressed her grief over Preston's loss in a statement to Entertainment Tonight. She said, "Kelly was a radiant, warm and gentle spirit -- a loving, devoted wife, mother and sweet friend. My heart breaks for John, Ella, and Ben. No words can express my sorrow for her family. Kelly's light shines on in her beautiful children."

A family representative told PEOPLE, "Choosing to keep her fight private, she had been undergoing medical treatment for some time, supported by her closest family and friends. She was a bright, beautiful, and loving soul who cared deeply about others and who brought life to everything she touched. Her family asks for your understanding of their need for privacy at this time."

The late 57-year-old was mother to daughter Ella, 20, and 9-year-old son Benjamin. Their son Jett had tragically died at age 16 in January 2009. John Travolta and Kelly Preston tied the knot in 1991 and had been together for over 28 years. Travolta honored his late wife, writing: It is with a very heavy heart that I inform you that my beautiful wife Kelly has lost her two-year battle with breast cancer. She fought a courageous fight with the love and support of so many.  My family and I will forever be grateful to her doctors and nurses at MD Anderson Cancer Center, all the medical centers that have helped, as well as her many friends and loved ones who have been by her side. Kelly’s love and life will always be remembered. I will be taking some time to be there for my children who have lost their mother, so forgive me in advance if you don’t hear from us for a while.  But please know that I will feel your outpouring of love in the weeks and months ahead as we heal. All my love, JT

Daughter Ella also took to Instagram with a moving message: I have never met anyone as courageous, strong, beautiful and loving as you. Anyone who is lucky enough to have known you or to have ever been in your presence will agree that you have a glow and a light that never ceases to shine and that makes anyone around you feel instantly happy. Thank you for being there for me no matter what. Thank you for your love. Thank you for your help and thank you for making this world a better place. You have made life so beautiful and I know you will continue to do so always. I love you so much mama.