Demi Moore Regrets Threesomes With Ashton Kutcher, Says He Used It As An Excuse For Infidelity

In her new tell-all memoir, "Inside Out", Demi Moore reveals facts about her rise to stardom and the breakdown of her relationship with Kutcher. 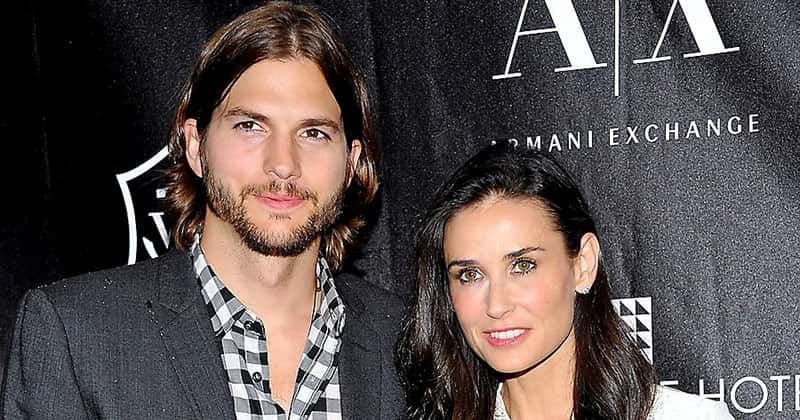 Demi Moore has partially opened up about the failure of her 8 year long marriage to Ashton Kutcher in her new tell-all memoir, Inside Out. When the couple began dating in 2003, Kutcher was 25 and Moore was 41. They married two years later and were together until their divorce in 2013. The fact that the marriage fell apart because of Kutcher's infidelity is well known, and Moore found out in the worst way possible: she got a Google alert on her phone with an article that claimed her husband was cheating on her. “I think my response was ‘Are you f***ing kidding me?’ That was it, and I think that I felt like I could barely take a breath,” Moore told Diane Sawyer in a recent interview with Good Morning America.

Moore wrote about the happy beginnings of her relationship in Inside Out, saying, “I was a 40-year-old who had a big life. And Ashton’s adult life was just beginning — I didn’t see all that because I was inside of it. I just felt like a 15-year-old girl hoping somebody liked me." She told Good Morning America, "I think that I had been responsible for so much of my life, and all of a sudden this window opened up where I was safe. I had money. He loved my children. It wasn’t something he feared. He seemed to be comfortable with the enormity of the ex-husband [Bruce Willis]. I mean, you know, I felt like I was not coming with baggage. I had trunks.” In Inside Out, Moore shares new details about her relationship with Kutcher, opening up about her reluctance to have a threesome and how she felt that was the beginning of the end for the couple. “I put him first, so when he expressed his fantasy of bringing a third person into our bed, I didn’t say no. I wanted to show him how great and fun I could be,” she writes. “They were good people, but it was still a mistake. I was strangely flooded with shame, I couldn’t shake the feeling that this whole thing was somehow my fault.” Moore believes that the openness in their sexual relationship was what eventually led to Kutcher straying. “Because we had brought in a third party into our relationship, Ashton said, that blurred the lines and, to some extent, justified what he’s done,” she wrote.

The couple also faced trouble while trying to have a baby. Moore had a miscarriage two years into their relationship, and the pair continued to try to conceive using IVF. “I can’t even bring into words how lost, empty, desperate, confused [I was]. I really lost sight of everything that was right in front of me, which was the family I had. And I think that the weight that it put on Ashton, it’s kind of a natural thing to pull back, when somebody’s clinging too tight,” Moore explained on the Good Morning America interview. She added, “I really know that there are parts of what occurred with this relationship ending that were a level of devastating for me that wasn’t really just about that relationship. It was really about my whole life. It was about being the 2-year-old who wasn’t safe — that this really represented that I’m not lovable, that I’m not deserving. And that’s not about him. That’s all just about me.”

In an interview with Wall Street Journal, Moore admitted that she hadn't yet shown the manuscript of Inside Out to Kutcher or Bruce Willis, to whom she was previously married. “I’d definitely like to engage with them before it comes out,” she said. “I have a sensitivity to anything that might make them uncomfortable. I had no interest in anybody being a bad guy.” She still maintains a close friendship with Willis after their divorce. Kutcher married his That 70's Show co-star Mila Kunis in 2015.  “We have some things that overlap,” Moore said of Kutcher, indicating an organization they co-founded to fight sex trafficking. “It’s friendly. But we’re not...hanging out.” Kutcher was unreachable for comment according to multiple news outlets, but a recent tweet from his account is being perceived as a reaction to the news.

I was about to push the button on a really snarky tweet. Then I saw my son, daughter, and wife and I deleted it. ❤️