The Asian giant hornet's attack on the mouse was captured on video and shocked people on social media. 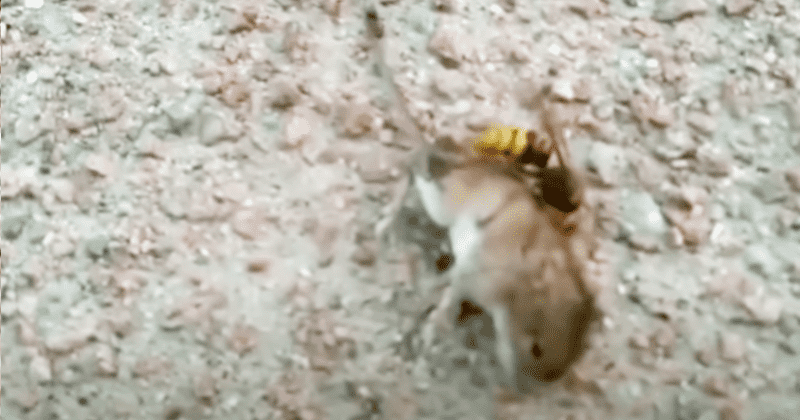 Shocking footage showed a giant deadly hornet kill a mouse that was at least 5-6 times its own body size in under just a minute. The video shared on Twitter showed the murder hornet render a mouse helpless and dead by stinging it repeatedly. The mouse despite being so much bigger than the hornet is unable to escape the hornet's tight grasp. The mouse manages to fight the hornet for a brief period but is killed within a minute, reported The Daily Mail. News of the Asian giant hornet finding its way to America had gone viral only earlier this week and the new video has created a stir among those on social media.

The 'murder hornet' appears to be only two-inches tall but viciously attacks the mouse that's much larger, eventually killing it. The hornet can be seen repeatedly stinging and inflicting damage on the rodent. The mouse struggles to escape the clutch of the hornet but can't really do much as it's being incessantly stung by the hornet. The video was shared on Twitter and didn't specify where the video was shot.

The giant hornets found in Asia were spotted last December in the state of Washington. It's the first time they've been spotted in America. The Asian giant hornet or Vespa mandarinia is native to countries such as Japan, South Korea, and Taiwan. The hornets are being spotted more frequently now after having hibernated to build nests and form colonies. Many beekeepers reported finding piles of bees with their heads ripped off. The hornets are known to carry a sting strong enough to even kill humans. They are estimated to kill up to 50 people a year.

Entomologists are planning to wipe out the species from America, given their threat to the dwindling bee population, which also endangers crops worth almost $20 billion in America. Bees are key pollinators for crops and any hit on their population directly reflects in a fall in crops. "They're like something out of a monster cartoon with this huge yellow-orange face," said Susan Cobey, a bee breeder at the Washington State University's department of entomology. They can be more than 2-inches long and are the world's largest hornets. “It’s a shockingly large hornet. It’s a health hazard, and more importantly, a significant predator of honey bees,” said Todd Murray, a WSU Extension entomologist, reported Yahoo News.

Hornets are known to attack bees and can kill up to 40 bees in a minute. "Hornets are most destructive in the late summer and early fall when they are on the hunt for sources of protein to raise next year's queens," said Truscott. "They attack honey bee hives, killing adult bees and devouring bee larvae and pupae, while aggressively defending the occupied colony. Their stings are big and painful, with a potent neurotoxin. Multiple stings can kill humans, even if they are not allergic."

Washington state agricultural officials and Washington State Department of Health (DOH) has requested beekeepers and residents to report any sightings of the giant hornets. State officials have also launched an app to report sightings. Beekeepers have been warned that a regular beekeeper's suit will not insulate you against the giant hornet's sting. State scientists have ordered specially reinforced suits to handle the hornets. "Don't try to take them out yourself if you see them," said entomologist Chris Looney of the state Department of Agriculture. "If you get into them, run away, then call us! It is really important for us to know of every sighting if we're going to have any hope of eradication."

Meet the Asian giant hornet — also known as the “murder hornet.” It can kill a human just by stinging a person a couple of times. And for the first time ever, one was spotted in the US. https://t.co/aGLtbk9VUE pic.twitter.com/zG5KSxU3YW

"If you are stung, DOH recommends washing the site thoroughly with soap and water and applying ice or a cold compress to reduce swelling. The agency also recommends an antihistamine or use of anti-itch cream to reduce itching if necessary. If you are stung multiple times or have symptoms of a severe reaction following a sting, call 911 or seek medical care immediately," reads a statement by the Washington state agricultural officials.