Dad Comforts Crying Daughter On Stage By Dancing With Her In Adorable Video: "Daderina"

The dancing dad did it all while holding a baby! 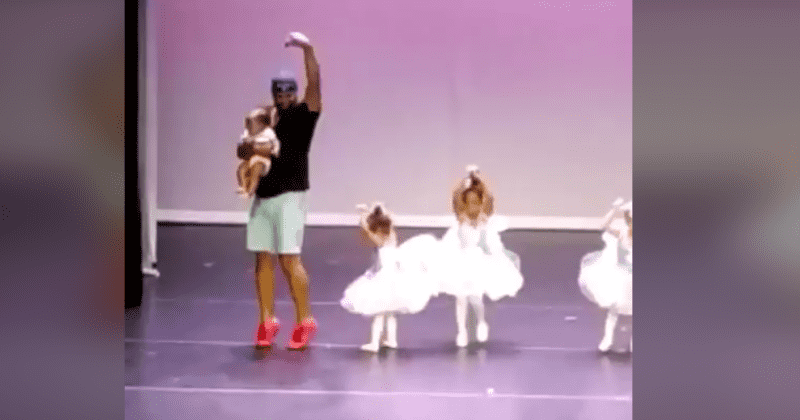 We love Girl Dads. A parental figure who empowers his daughter to push back on stereotypes? More parents like this, please! Add a dancing #GirlDad to the mix and hearts are ready to explode! Say hello to Dancing Dad/Dadderina Marc Daniels. A video of the twirling ballet dad has gone viral and here's the story behind it. According to the Washington Post, Daniels is a lawyer in Bermuda. He and his wife, Kim, have three daughters. During a ballet dress rehearsal, daughters Giada, 4, and Bella, 2, were waiting to rehearse while mom Kim was backstage. “My husband was holding our youngest daughter, Suri. I was able to tend to the older girls backstage, but it was a long wait. That’s why the tantrum started,” Kim said. “Bella started marching on stage, so I thought she wanted to go for it. But she demanded Daddy. I thought, ‘Wait! Mommy has been here for an hour!’”

SuperDad, or should we say... Daderina? 💜
With a baby in tow, this dad went on stage and danced with his little ballerina who got stage fright at a recital. What's the best thing your dad ever did for you? (via Kids Are Just The Cutest) https://t.co/P52sPg8BtO pic.twitter.com/IKwkn5ioi0

Daniels stood by to help Bella from the sidelines.“I went with the goal of trying to soothe and encourage her,” he said. “I did not want to pull her offstage away from her sister and single her out from the other girls and boy.” When the toddler broke into tears and seemed inconsolable, Dad stepped in and saved the day! He took her hand and started following the teacher's choreography. For the little girl's final performance on another date, she was able to gain enough confidence to dance without Dad and on her own. Kim said, “We had front-row seats so she could see us making eye contact. She looked confident and brave.” Daniels added, “We were really proud that she wanted to do the performance on her own and showcase her talent, particularly as I did not want to become the focus of the show, especially for the other parents, and especially in light of all of the publicity. However, I wore the same red Pumas to execute the toe point, just in case!”

“We knew that Giada would rock it, but we felt proud to know that perhaps my going on stage with Bella during the dance rehearsal gave her that extra boost of confidence to really shine and build her character,” he said. Of her husband's performance, Kim said fondly, “My husband is very loving; he has a beautiful bond with his daughters,” she said. “Watching him dance was so attractive, but it didn’t surprise me. It is the man I married.” Daniels is a little taken aback by all the publicity he's gotten from his impromptu dance, reminding everyone, “Mothers are phenomenal and do so much every day that goes unnoticed, even by their own partners. So I do not feel worthy of all of this publicity for something that is just normal to us. However, I recognize how this video can be of inspiration to others, too, and I am certain that in the years to come, my own children will treasure this moment as a token of my love and respect for them.”

Marc Daniels, a father of three from Bermuda, has earned the n... pic.twitter.com/m0kltYUBte

The internet has fallen in love with the dancing dad for the way he broke many stereotypes that unfortunately still hold true today. Toxic masculinity plays a huge role where some fathers would feel like a "sissy" if they danced with their daughters, played with dolls, and the like. We're so over this! At the end of the day, what's more important: showing your children you love and respect them, right? Daniels was able to encourage his daughter and wasn't afraid to stand by her side. He showed her not to be afraid of dancing ballet in front of a crowd and taught her an important lesson in facing one's fears. He also taught her to have fun while at it. Instead of taking her off stage, he showed her that she could power through any difficult situation and take it head-on. And the best part is that he helps his toddler finish her ballet routine, all while holding his baby daughter Suri in his arms. We could all learn from this dad's simple but powerful gesture: we heart this 'daderina'!

We need more parents like this dad!!! Gives me hope for our future 😇