The girl's mother shared the video on Facebook after she had a laughing fit watching her husband dance. 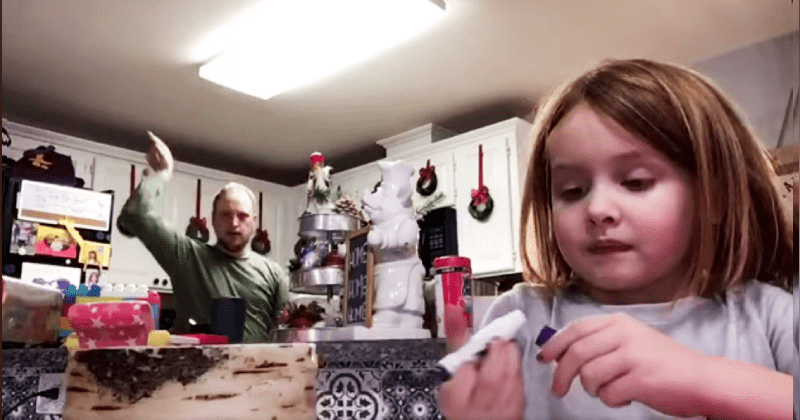 A father from Oregon has become the toast of the internet after he video-bombed his daughter's crafts tutorial with cool dance moves in the background. Little did he know that his daughter would send the video to her teacher. Isaac Jones had assumed his daughter was making one of the many video tutorials and decide to prank her by dancing in the background. Jones had music playing in the kitchen and he couldn't help himself as he busted a few moves for the camera. The video was uploaded to the classroom app SeeSaw where her first-grade teacher got to see Isaac's cool dance moves, reported PEOPLE. The video was shared on Facebook by his wife Jennifer Jones. "Daddy thought she was just making a 'tutorial' like she typically does," wrote Jennifer wrote as she posted the video of Jones dancing for a full twenty minutes as his daughter went about her tutorial.

He also got his two other children involved with him holding one of the kids up. Delaney, the little girl recording the tutorial, takes the interruptions in her stride and jokes, "What is wrong with this family? I'm just trying to do peace and quiet art!" before carrying on with her project. He then comes close to his daughter and dangles his little son in front of the camera, cracking her up each time. Jennifer wrote, "I hope her teacher laughed as hard as I did." The cute video has since gone on to garner 14 million views 51,000 likes. Jones was soon flooded with messages and appreciation for his moves and his love and support to his kids and family.

"I personally got a kick out of seeing so many other dudes tagged by their loved ones who know they'd be dork'n out with their fam too when given the chance," wrote Jones on Facebook. He urged others to make such precious memories with their kids. "Guys: take these chances we get to make memories with your amazing kids, the miracles they are. It's one of the best parts about being a parent," he wrote. "Because unlike from your professional life, as a parent if you act like a fool the ones who mater actually admire you even more! What a relief right?" He also reassured the other dads out there that they surely couldn't do worse than him. "Other than the fact that yes, there's actually a guy out there that dances worse than you do," he joked.

He also touched upon the difficult year it has been for everyone with the ongoing pandemic. He encouraged everyone to look at the positives as we all fight through these dark times. "We've all had a tragedy this year. Some more than others and my family is no exception experiencing financial hardship, sickness, even death... but why dwell on that?" wrote Jones. "I'm not saying it's easy or that we always every time chose happiness, but allow yourself the chance to choose and to take those moments when they come. Point is, I'm so glad to spread a little levity and distraction in a time when I know I certainly need it, so I'm hoping you've needed it too! Thanks for allowing me the blessing of sharing my incredible family that always keeps me laughing."

One user commented on Jennifer's page, writing, "This has gone all over the world and has been such a tonic over here in Scotland and England as we deal with a second lockdown. Thank you amazing family." Another Facebook user commented that such videos were comic relief for teachers as well. Carol Foster wrote, "As a teacher, I’d absolutely love getting something like this! Great family! Lol."