The two weddings were a day apart and he planned to drive to his daughter's wedding but failed to reach on time as he got lost in traffic. 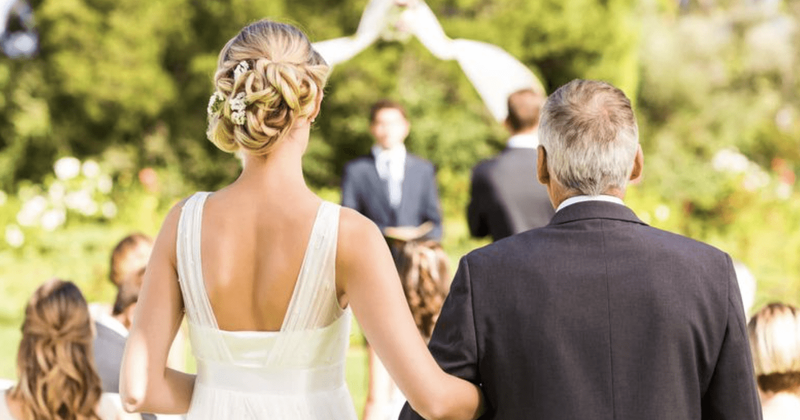 As a caring father, you want to give your loved ones your all. But things don't necessarily turn out the way you planned. Add a second family in this mix and it becomes difficult. Like this father who disappointed his biological daughter for failing to walk her down the aisle on her wedding day only because he got caught up at his stepdaughter's wedding. Both took place just a day apart. Filled with regret, he turned to AITA (AmITheA**hole) on Reddit to seek confirmation if he was really the bad guy. It would have probably been much easier handling the entire situation if the two got along but unfortunately, it was just the opposite. "My daughter has always been resentful of my stepdaughter and growing up, we've had to deal with a lot of issues related to this resentment," the man wrote in his post.

He was in a difficult spot the moment the two decided their wedding dates. They planned their wedding on the same weekend back in September 2019. His stepdaughter sent out a save the date for her wedding for a Saturday. But it turned out, his biological daughter had set her wedding day on the same weekend but on Sunday. "My daughter immediately called me, furious and accusing her stepsister of deliberately planning her wedding the day before hers," he added. The father tried to solve the situation by talking to his stepdaughter but she said it was "pure coincidence" and added that she hadn't spoken to her because they never got along previously. The problem the father found himself in was that his biological daughter's wedding was taking place in another state that was a 13-hour drive. Both made it clear they wanted him to walk them down the aisle.

Throwing some light on his relationship with his two daughters, the man noted, "The unfortunate reality was that my ex and I had shared custody so naturally, I saw my daughter less than my stepdaughter. My stepdaughter's biological father passed away and I've treated her like my own since she was 2. I love them both equally and I've never shown preferential treatment towards my stepdaughter, something my daughter always accuses me off."

So, the father hatched a plan to be present for both weddings. He said, "I did the math and I calculated that if I left my stepdaughter's wedding at 10pm and drove through the night, I'd make it with 2 hours to freshen up and get ready." But the odds were just stacked against him.

He continued,  "I got lost along the way plus traffic and I missed the actual wedding ceremony. My daughter's stepfather ended up walking her down the aisle by himself.  I feel like I tried my best to make both my children happy but I failed one of them completely." After the wedding, the tension between his daughters blew up with his daughter's friends attacking his stepdaughter and her husband on Facebook. They claimed she planned all of it on purpose. Even when he tried to intervene to "clear up the situation," he said he was "completely shut down." He tried to compensate and make up for his absence by giving his daughter a costly gift. "I gave my daughter and son-in-law an additional gift of money to go to Japan, which has always been their dream. It was a lot of money but I hoped it would be a sort of way for me ask forgiveness," he stated.

However, that didn't do anything for him. He wrote, "They had to postpone their trip because of covid but my daughter refuses to even consider any sort of forgiveness. The few times she picks up my calls always ends with her bringing up the wedding and getting angry at me again. I was told by a few members of my family that I was the a**ole for not prioritizing my biological child's wedding and skipping my stepdaughter's wedding instead."

Most Redditors told the dad straight up that he was indeed the a**hole for not prioritizing and planning for his presence in his daughter's wedding. Some even went to the extent of saying she was probably right in claiming she was the one who was always left out and a victim of preferential treatment.