His daughter confided in his wife that she was terrified that her bully would retaliate, and also that she may have lost her friend for bringing so much attention to her financial issue. 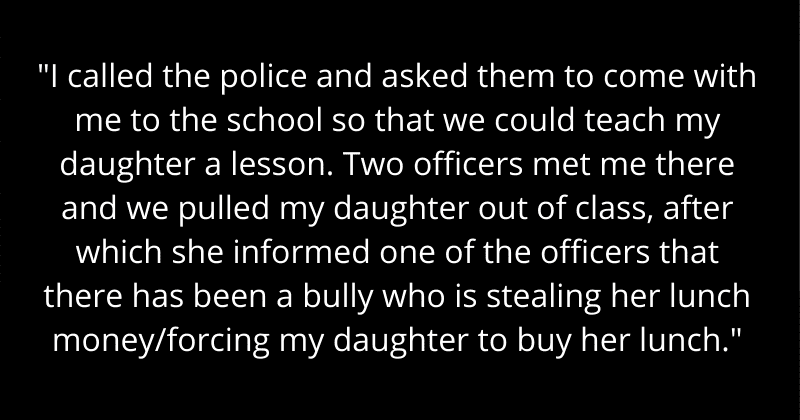 There is no handbook that conveniently sets the rules of parenting with a clear list of "Dos and Dont's" to make sure parents are doing the right thing as they raise their children. Some parents could really use a handy rule book like that but there are other times when the sheer ability to think would be enough to tell them not to take parenting to the extremes. Like this dad who didn't stop to think if the punishment he was about to give his daughter was too severe or not. An anonymous Reddit post exposed the father's parenting skills when he posed a question in the AITA thread.

In the post, the father tells the story about how he tried to teach his daughter a lesson for stealing money from his wallet every day. He started off by saying that his daughter, who is in sixth grade, usually takes a couple of dollars from his wallet for lunch. He noticed that he was missing a bit more money than usual so he went on to do something cruel. "I planted a 20 dollar bill before my daughter took her lunch money out. Sure enough, she took it," he wrote. Normally, the bait would be to confirm if the child was indeed taking extra cash from the wallet. The parent would then confront the child themselves, address the stealing, ask them for an explanation and mete out punishment as appropriate. But not this dad. This dad wanted to teach his child a lesson she would never forget.

"I called the police and asked them to come with me to the school so that we could teach my daughter a lesson. Two officers met me there and we pulled my daughter out of class," he wrote on the Reddit post. It was then that the truth behind the daughter taking a little extra cash came to light. "She informed one of the officers that there has been a bully who is stealing her lunch money/forcing my daughter to buy her lunch. She also has been buying lunch for one of her friends who can not afford it. This was confirmed by both the bully and the friend," he wrote. The daughter was rightfully upset at being treated like she was and remained silent all the way home as her father lectured her "that stealing is wrong and can get you in a lot of trouble. And that in the future she needs to speak to myself or her mother if there are issues at school and we would be happy to help her resolve them."

When they got home and the little girl's mother was brought up to speed she flipped out and burst into tears. She told her husband that the stunt he had pulled was "a one-way ticket to estrangement from our daughter." With a better sense of judgement than her husband, she told him that they should have just asked her why she was stealing in the first place. The dad displaying his lack of faith in his own daughter wrote, "She would have just lied about stealing in the first place so I really don’t understand what her idea of a solution is." He went on to say that his daughter confided in his wife that she was terrified that her bully would retaliate, and also that she may have lost her friend for bringing so much attention to her financial issue. "She apologized for stealing and said she just didn’t want us to intervene," he said ending the post with, "I am wondering if I really did the wrong thing here."

A resounding response to this question by a lot of the users was "YTA." Reddit user, icantsleepatnightx said: Humiliating your daughter without talking to her and wasting the time of police officers on top. Another user Misstotos, responded to the question saying: Agreed. YTA. You treated your 12-year-old like she was a criminal. She now knows exactly what you think of her and she hates you. She probably didn't like you before this went down but now she will pretty much always hate you. Well done dad! User Solleil, had this to say: Yeah this is massive assery. He could grounded her, lectured or took her phone. Whatever the hell people do with their kids these days but oh no, OP dad went far and beyond that.

Legit humiliated her and now kids and everyone else will destroy her and talk about this for a long a** time over 20 f*cking bucks. Seems like the wife was out the loop as well. Imagine getting this b*tthurt and calling the police on your own child LOL wow. Good luck trying to fix this one up dude.