The dad took to Reddit to say that he made this arrangement because he spent extra on his daughter, so he had her scrub the bathroom and cook meals for him and her brother. 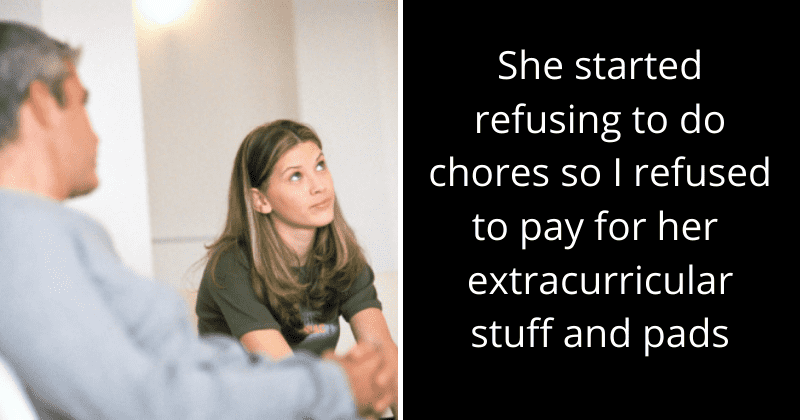 We all know just existing costs a lot of money and as kids, we are dependent on our parents to help us survive. Providing basic necessities is expected of parents. Preparing their children for the real world by expecting to do chores is not uncommon. But what is not acceptable is expecting kids to do chores in return for their basic necessities. This widowed father took to Reddit to post on the AITA subreddit, wondering if he was a jerk for doing this to his daughter. Additionally, he wanted to also clarify if treating his son differently from his daughter still made him a reasonable dad.

The 50-year-old man's wife passed away 10 years ago and he has been taking care of his 17-year-old son and 15-year-old daughter since. Recently it caused a big stink with some family that my daughter does chores, but my son does not, he wrote. I explained it’s because I have to spend extra on my daughter each month not only for her extracurriculars but for her monthly supplies, so it's my way of having her pay me back. She cleans the shared living spaces and bathrooms in our apartment and cooks four meals a week.

This was when his brother pointed out that he spends twice as much on his son's extracurricular and by his own logic, he should have to do chores too. I explained he didn’t because I feel it could help him get into college but hers were just a hobby, in my opinion, the man said. The daughter was, rightly, upset when she overheard her father speak of her this way and left his house to live with her aunt. She started refusing to do chores because it isn’t fair. I told her she’d still be doing her chores and life isn’t fair so stop being a brat, or I’d refuse to pay for her extracurricular stuff or pads. I wouldn’t actually do that, but I was mad when I said it, he went on to justify his actions.

His sister called him an abusive a****** for treating his daughter this way. My brother and sister are coddling her and I’m furious, he said and went on to add, My son, plays Football and Baseball while my daughter is in the choir and a dance group, so yes I do think my son has a better chance at getting a scholarship. I’m not sexist and I don’t appreciate being called one, and for those of you messaging me saying you hope someone calls CPS on me, I’m not doing anything wrong so that’s just stupid. Reddit has declared him an a-hole and had a lot to say to the man. One Reddit user even pointed out how he was pink-taxing his daughter's existence.

Reddit user, yupitsnoone wrote: YTA. Both kids have extracurricular. Both kids cost you money. It just sounds like your playing favorites and devaluing your own daughter's activities. Your daughter will learn to resent you. How dare you threaten and name call your own daughter. You criticize her for acting out, but it's okay for YOU to act "like a brat"? I don't care if you were "mad at the time". You're 50 so act like it. If you can't parent without name-calling and threatening then you shouldn't be a parent. This is how kids end up NC with their parents.

ItsGoodToChalk stated: YTA. Not for expecting your child(ren) to pitch in around the house, but for the sexism and the godawful manner you've approached this with. Withholding pads from a teenage girl as punishment? What? Expecting your son will go to college, but basically writing her off? The 50s called, they don't want you either.

OneDumbPony said: YTA for being abusive and sexist. I should've stopped reading when you said she should do more chores because you spend extra on her for hygiene products for a condition she can't control. And added, Your son is also 17 and should start learning how to care for himself and his living space for when he moves out.