trending celebrity people lifestyle news animals
Heartbroken Dad Wakes Up Paralyzed After Accident, Then Finds Out It Killed His 3 Daughters

Heartbroken Dad Wakes Up Paralyzed After Accident, Then Finds Out It Killed His 3 Daughters

The father was returning home with his fiancee and three children when a drunk driver crashed into them. 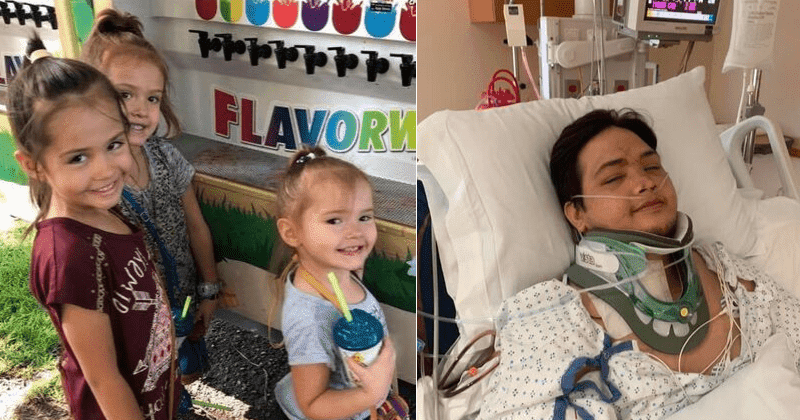 Life can take the worst turns when you least expect it, and that's what happened with this 26-year-old father Somchai Lurak. One moment, he was happily driving his three daughters home and the next, his family was taken away from him, reports DailyMail. Lurak was driving home with his three little girls Aneena, 6, Kya, 5, and Drayka, 3, strapped into the backseat after a visit to his sister, Amanda Lurak-Mokdenhauer. However, while they were on their way home, a drunk driver rammed into their car at 80 mph and life took a dark turn for the father.

When Lurak woke up in a hospital bed days later, he found out he was paralyzed due to the severe nature of his injuries. But the worst pain came to him moments later when all his three daughters were pronounced dead. The news was broken to him by his older brother, Anthony Smock, and sister Amanda, who recalled the horrific incident to The Sun. "My brother has said he's doing the best he can but he's devastated," Smock said. "As of right now he's classed as an incomplete quadriplegic - he's got feeling but no movement. We don't know whether he'll ever walk again." Filled with anguish, he continued: "We had to wait till he was less sedated to tell him that his beautiful daughters were dead. They were the sweetest girls. Our family have three pieces of our hearts missing forever now."

Emma Weigand, Lurak's fiancee, who was in the passenger seat when the accident occurred survived with broken ribs and a broken arm, while Lurak too survived in miraculous circumstances. But, the Idaho restaurant manager is now left crestfallen after losing his three precious girls. Smock continued: "I start thinking about my nieces' beautiful smiles and sweet little giggles, and how every time I would sweep them up into my arms and give them hugs and kisses," Anthony Smock said. "I want them back and I want my brother to be able to have his babies. It's a miracle we still have Somchai and his recovery has been improving." Speaking to KTVB, Weigand's sister, Jessica Jones, described the girls as full of life and that huge space is now left open in their hearts and lives. "It’s a hell I would not wish upon anyone," she said describing a whole life without the "the sweetest girls ever". Lurak's sister Amanda said: "They were there one minute and gone the next... I don't know what to feel other then I miss them terribly bad, my heart is broken... Now I'll have to live without them running at me with open arms screaming 'Auntie' and my children will have to grow up without them."

Lurak and Weigand were all set for a happily wedded life this year and the latter was even happily looking forward to legally adopt the three daughters. Weigand and even her mother hugely adored the three children with the woman even considering them her own grandchildren. Sharron Weigand stood KTVB: "I can’t put into words. I dropped to the ground when I heard the news. I think in the 30 years I’ve been with my husband, I’ve never seen him cry more than he has in the past two days. It’s still unreal that they’re just gone in the blink of an eye." The family is enraged that a single moment of misjudgment from a careless man has affected the lives of so many individuals. Smock shot a warning to all drunk drivers out there and said: "To everyone everywhere, I'm begging you. Never ever drink and drive - it's selfish and stupid and can destroy people’s lives and families forever. One act of careless indifference for others can impact a stranger's life and yours forever. And you're the one who will have to live with it sober."