Screenshots of the messages between the restaurant and the prankster were posted online and sparked outrage. 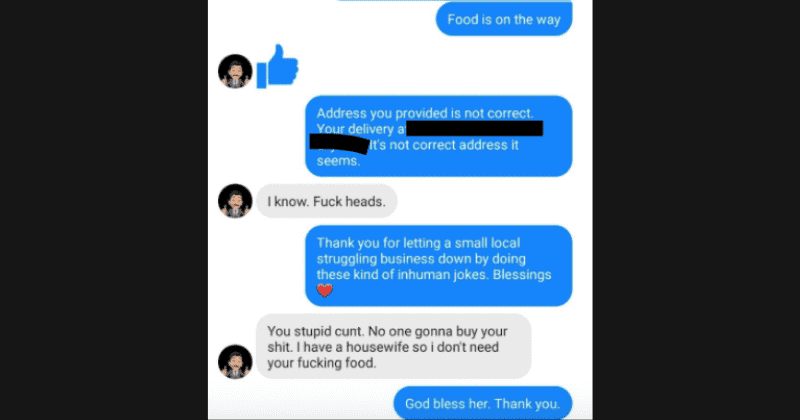 Pranking people has become the norm these days, with many relaying these over social media and garnering thousands of likes. But then when does a prank get taken too far. This one case where a cruel man in Australia ordered $170 worth of food to a wrong address, certainly qualifies. And for the unlucky eatery, it could not have come at a worse time with the pandemic making it difficult for small-time restaurants and local businesses to even survive. What was even more infuriating is the fact that the prankster was unapologetic and instead abused the restaurant when told about the wrong address. Screenshots of the text exchange between the man and the restaurant were posted on Reddit and it set people off causing widespread outrage.

In one of the screenshots, the food place sends a bill of the order with the items and amount to be paid to which the prankster replies with a "thumbs up" emoji. But the food reached an unsuspecting resident instead. This was pointed out by the restaurant who wrote: "Address you provided is not correct." The man wrote back coldly, "I know. F**k heads." While realizing that a cruel joke had been played on them, the restaurant didn't abuse or threaten the man. It only replied with dignified responses, wishing the man good luck. The restaurant wrote back, "Thank you for letting a small local struggling business down by doing these kind of inhuman jokes. Blessings." The man cruelly replied, "'You stupid c**t. No one wanna buy your s**t. I have a housewife so I don't need your f**king food."

The Redditor who made who posted the screenshots wrote, "This makes me livid." Others called for action to be taken against the prankster. One commenter wrote: This is traditional theft right? Pass it to the Police, do the do anything? Any experience? Another Redditor added there were rules to punish such pranksters: There's a law about messing with a businesses usual trade or something like that, I worked at a pizza place and we called the police on everything from consistent prank calls to stuff like this, anything that was causing the business to lose money. Redditor Zirie wrote about certain caution that restaurants such this one could have taken to prevent such pranks.

The person wrote: This was a huge order. I would recommend payment upfront for orders above a certain threshold from first time buyers. Redditor, gedonwithit29d also agreed: There is no reason why payment up front shouldn’t be a standard policy. That was a jerk thing to do to a business but poor business processes allowed it to happen. MasterPlanPenguin29d also concurred and wrote: Exactly. When you get a large order or anything over $100 it should be payment up front. Anything below that sure keep it to cash optional payments as well. Or at the very least require half the amount be paid then and then half can be paid cash. Many said they felt for the man's wife for having to probably up with such a sadistic man and who knows what other kinds of mental torture.

Redditor, dorcus_malorcus29d wrote he felt "bad for the wife." Commentor, trowzerss29d added: The housewife. Irked me that he didn't say he had a wife, but a housewife, like that's her whole identity. Feel sorry for her. She probably has to put up with this sort of stupid power game shit too. Many however speculated that the prankster wasnall alone and leading a sorry and pitiful lofe. RealHungoverFC29d wrote: I would suspect that person lives alone, surrounded by a fortress of KFC, McDonalds and HJ wrappers and cups, all as empty as this c**ts life.