O'Donnell called Ivanka Trump a talentless, non-intelligent woman and said she wasn't deserving of her role in the White House. 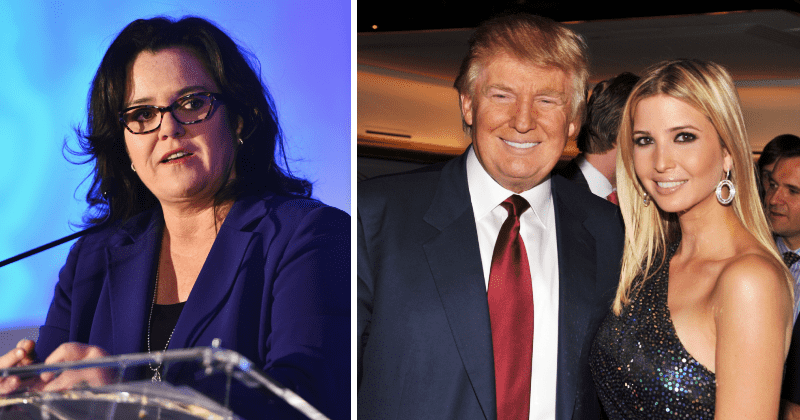 Rosie O'Donnell questioned the relationship between President Trump, and daughter Ivanka Trump, claiming the pair had a "creepy incest feel." Rosie O'Donnell and Donald Trump have been trading insults for more than a decade, dating back to 2006. Rosie O'Donnell once described him as a "snake-oil salesman" while he responded by calling her fat and a loser. She reopened old wounds as she took aim at the President and Ivanka Trump while talking to Michelangelo Signorile on Sirius XM Wednesday. "There's creepy incest feel that is very prevalent amongst Donald Trump and his children, at least his daughter [Ivanka]. I think he's been doing bad things with her for a very long time," said the comedian and actor.

She also questioned Ivanka Trump's resume and her ability to serve as a White House advisor. "I think she's like, a talentless, non-intelligent, non-powerful woman. It's laughable to think of her [Ivanka] in any kind of public service role. No one in his family has ever been in public service. Why should they start now?" asked O'Donnell, according to The Daily Mail.

Trump has always shared a problematic relationship with Ivanka, at least in the eyes of the public, given all the crass remarks he had made about her over the years. He made the disparaging comments in an interview with radio host Howard Stern in 2004, according to Politico. "My daughter is beautiful, Ivanka," to which Stern interjects, “by the way, your daughter.” Trump finishes Stern’s sentence by repeating “she’s beautiful.” Stern continues, “Can I say this? A piece of ass.” Trump replies, “Yeah.” Stern continues, asking if Ivanka got breast implants. "No, she didn't. I mean, I would know if she did. Why, did she look a little more stacked?" asks Trump about his daughter, before adding, "She’s actually always been very voluptuous.”

O'Donnell's tiff with Trump goes years back and she said the President didn't like that she didn't endorse his claim of being a self-made man. "I said some things about him — not nearly as bad as I could have said ... but I just talked about him not being a self-made man, having money from his father, and saying he went bankrupt — and it made him go berserk," said O'Donnell, reported People. "He went on a tirade for a good decade that hasn’t ended today." She said that he "can’t let go of a strong woman standing up to him. Recently, she slammed him for his handling of the pandemic. “There’s tremendous confusion, and it comes right from President Trump and it started from him saying it was a hoax, a Democratic hoax,” said O’Donnell. “At this level of crisis that he would choose to go that way I mean — he really is such a disappointment to so many people on so many different levels,” she added.

"Donald Trump specifically asked about me because I remind him of his daughter, and she said, 'Well, she's 13 as well.'"

I *know* we avoid seriously discussing this because it is disturbing beyond comprehension. But we all know what Trump has said about Ivanka.

Donald Trump's niece Mary Trump revealed recently in her new book that he had made inappropriate comments about her breasts when she visited his resort in Florida in the early 1990s. Mary said Trump made the comments in front of his then-wife Marla Maples. The incident happened when Mary Trump, then 29, showed up to a luncheon at Trump's Mar-a-Lago resort in Florida, in a bathing suit. "Holy shit, Mary. You're stacked," said Trump, she claims in the book, reported The Guardian. Marla Maples, his then-wife, reprimanded him in "mock horror" by with a slap on the wrist, stated Mary. "I was twenty-nine and not easily embarrassed, but my face reddened, and I suddenly felt self-conscious," wrote Mary Trump. "I pulled my towel around my shoulders. It occurred to me that nobody in my family, outside of my parents and brother, had ever seen me in a bathing suit." At least 43 women have accused Trump of sexual misconduct, assault, or rape, according to The Independent.