Glenn Goss, Jr. quit his job after multiple women accused him of sending them inappropriate messages on Facebook. 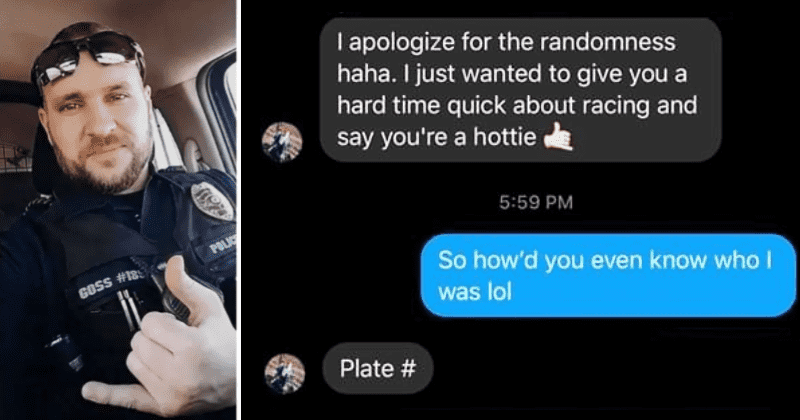 A woman exposed a creepy cop after he used the police database to look up her personal information. The cop noted Emily Hackler's license plate, looked up her data from the police database, and messaged her on Facebook. Emily Hackler, 21, outed the officer and posted screenshots of the message on her Facebook page. "So some creep decided to follow me on my way home from planet fitness. Turns out he works for the Rossford police department and used my plate number to figure out who I was, to message me personally, and tell me how hot I was. Can you say HARASSMENT," she wrote in a Facebook post. He resigned from his job after being accused by multiple women of misconduct and invasion of privacy.

Glenn Goss, Jr. looked up Emily Hackler on Facebook and messaged her, saying he "had fun racing" her when she was actually speeding to shake off the creepy cop. "Had fun racing you," messaged Goss, to which she replies, "who even are you?" Glenn Goss, Jr. then sends a picture of himself. She later made it clear that she wasn't racing. "We weren't 'racing.' I was speeding because he was following me after being stopped right next to each other at a stoplight."

Glenn Goss continues messaging: "I apologize for the randomness haha. I just wanted to give you a hard time quick about racing and say you're a hottie." Hackler asks how he found her on Facebook and he confirms that he looked up her car number plate in the Police database. Realizing he might have creeped her out, he writes, "I'm teasing haha. I didn't mean to come off as unprofessional."

Emily didn't hold back when she replied, letting the police officer know what she thought of his actions. "I'm not a fan of stalking and harassment. You had no business looking up my information while not even on the job. Meanwhile, messaging me on your personal account which you got from my information that I did not willingly give you," she wrote. The Facebook post went viral, garnering more than 20, 000 reactions, and 43, 000 shares. Rossford police department sent the officer on administrative leave after being made aware of the post. His badge and gun were taken away.  Glenn Goss Jr., son of a former Rossford’s former police chief, resigned from the job before the investigation could be completed. "It was an invasion of privacy for sure," Emily told The Blade. "He was in his personal vehicle. You're not allowed to stop or look up anyone's information without probable cause, so the fact that he was not in his official work vehicle, it got me thinking, 'How did this happen? Why did he search my plate number to get my information?' It did make me feel very uneasy."

this is the same police officer.. just a different woman he chose to harass. #ACAB pic.twitter.com/irUl9cdIZO

After the story went viral, another woman revealed that Goss had abused his powers to look her up in the police database as well. He then messaged her without consent. She had been stopped for speeding by Goss last summer. He was professional during the interaction but looked her up on the police database and messaged her on Facebook. She ignored the messages after realizing he was being a creep. She didn't report the incident but saved the screenshots. They were posted on Twitter after Hackler had outed him. "It needs to stop," Taylor told The Blade. She said there could be many other women that Goss had messaged. "If it happened to me and this girl, it's happening to more. I don't feel safe and protected by these men. I feel harassed." Rossford Mayor Neil MacKinnon III confirmed that there was one more complaint against Goss with regards to abusing his powers to hit on women.

He found their profiles by scanning their license plates.

The investigation is being handled by the Ohio State Highway Patrol. Mayor MacKinnon said, "We wanted to take it out of the department itself. We first looked at the Wood County Sheriff to do the investigation, but Glenn, Jr., had worked there in the past, so we thought this was the most transparent and generous way to do an investigation." Rossford Police Chief Todd Kitzler denied that officers had access to the database systems in their personal vehicles or when they were off-duty.