trending celebrity people lifestyle news animals
This Crazy Math Equation Is Dividing The Internet. Can You Solve It?

This Crazy Math Equation Is Dividing The Internet. Can You Solve It?

The seemingly simple math equation confounded Twitter with a majority divided between '1' and '16' as the answer. 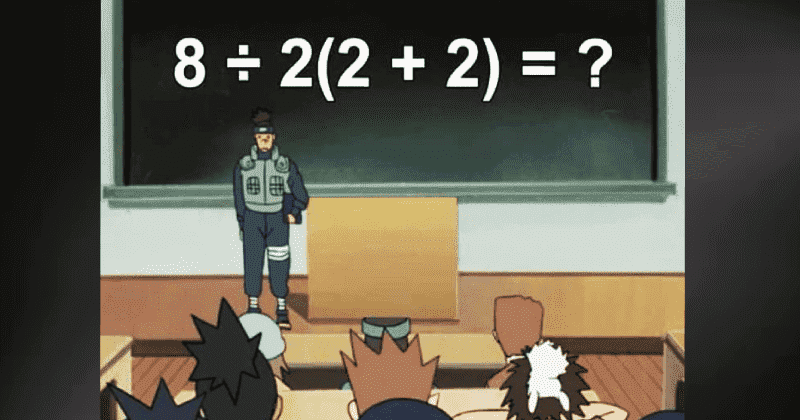 You'd think you've seen the last of math equations in high school but like nature, Math always finds a way. After the blue dress-gold dress conundrum that drove the internet mad, a seemingly basic math equation is here to ruin your sleep. The question was posted on Twitter and asked "what’s the answer to 8 ÷ 2 (2+2) =?" Sounds basic, right? Well, Twitter users came up with many answers to the question that's basically fourth-grade algebra. The answers that stood out were 16 and 1. Interestingly, it wasn’t just your average Twitter user (me) that was left confused. The equation divided Math professors with even calculators were showing different answers to the same question.

Eager to find the solution, I decided to go through the replies (as you do) but all I found out was that there's a vicious math community out there that's ready to kill anyone that disagreed. The debate got heated with one user writing: It’s 16 and if you say otherwise start packing your clown shoes. The "1" faction wasn’t amused either with one user hitting back: It’s 1. Blowing my mind how people are really debating this, it’s fu*king 3rd-grade math. A representative of the "16" faction shot back: Time to re-take 3rd-grade math. I don't remember Math ever being this fun. I grabbed some popcorn. I had nothing else scheduled for the day.

Leading mathematicians said the question was set up to deceive the layman (me). They argued that without sufficient brackets, there was a lot of ambiguity providing scope for multiple interpretations of the equation. As per the rules of Algebra, the answer is 16. We get the same answer even if we analyze the equation as per BODMAS (brackets, order, division, multiplication, addition, subtraction) conventions or using the PEMDAS (parentheses, indices, multiplication, division, addition, subtraction), or as many remember it — Please Excuse My Dear Aunt Sally. Considering the very foundations of math were at stake, many weren't ready to excuse your Aunt Sally.

sis .... it’s literally pemdas you should only be getting 16🤡

Solving the bracketed addition is the starting point of this equation, which leads us to 8 ÷ 2 x 4 =? Up to this point, everyone agrees. Some argued that according to both BODMAS and PEMDAS, division and multiplication have the same priority. So going from left to right, we divide 8 by 2 and then you multiply by 4 and thus giving you answer 16.

1. The amount of people saying 16 need to retake math 😭

Math appears to be a matter of opinion now.

It's either 1 or 16 depending on which mathematician you listen to, because order of operations isn't a hard and fast rule, and math is really just a language.

And nothing is true. pic.twitter.com/d324s8grlA

Sometimes you just gotta throw caution to the wind and think outside the box.

Certainly not the first time math has ruined someone's morning.

This is not what i hopped on twitter for this morning..

At the end of it all, it appeared there was no one clear answer. The Math people at Berkeley wrote out a 3456-page explanation on why the math equation is poorly written, stating that the real answer is unclear. Well, that didn't work with my Math teacher but ok.