trending celebrity people lifestyle news animals
Grandpa, 90, Comes Out As Gay As He Couldn’t Forget The Man He Fell In Love With 70 Years Ago

Grandpa, 90, Comes Out As Gay As He Couldn’t Forget The Man He Fell In Love With 70 Years Ago

Kenneth Felts is a Navy veteran who knew he was gay since he was just 12 years old. 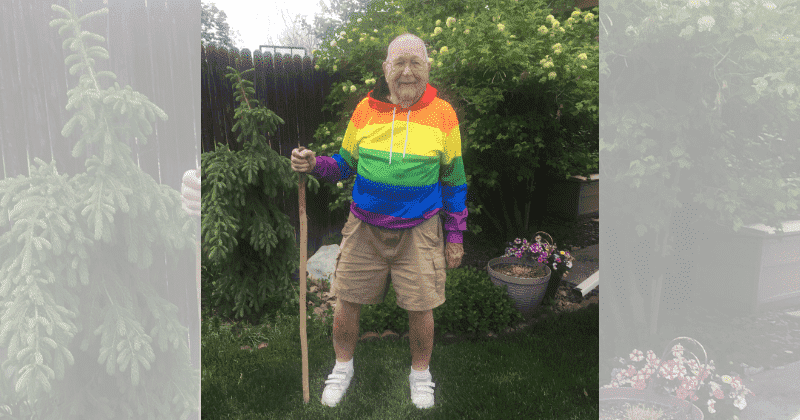 While most people have been cooped up indoors due to the coronavirus pandemic, one grandfather from Colorado has come out with joy. Kenneth Felts, 90, came out as gay after concealing his sexuality for many decades. The Arvada father and grandfather said that he used his time during this COVID-19 isolation to write down his memoir. On its pages, he revealed for the first time in his life that he is gay. Once he shared this news with his daughter, he went on to write a Facebook post and let the whole world know who he really is. The post has since gone viral and the story has been picked up by media outlets all over the world, USA Today reported.

Stuck at home during the pandemic, Kenneth Felts began to write a memoir, chronicling the past 90 years of his life.

But he quickly came to realize that his story would never be complete without revealing his true sexuality. https://t.co/L4EcCDoCFI

“Having come out when I did has been the highlight of the rest of my life, I guess. I’ve never enjoyed so much love from unknown people all over the world,” Felts told FOX31. "The only thing I could do was just hide it, and I hid it deep and dark, and I stayed that in that basement for the rest of my life practically," he said. "I just denied it and ignored it." “I had really planned on taking it to the grave with me, and never, never being (anything) other than straight,” Felts told USA Today.

Kenneth Felts came out as gay at age 90 - and he’s only just getting started #Pride https://t.co/HtpOvf3RST

Felts is a Navy veteran who knew he was gay since he was just 12 years old. Despite having a few brief flings during his adolescence, and young adulthood, he kept that fact mostly hidden due to his Christian upbringing. It wasn't until meeting a former partner named Phillip that he briefly lived out his life as a gay man. “I had been keeping this secret most of my life, and I had planned to take it to the grave,” he explained in an interview on the 3rd Hour of TODAY Friday. They “were just happy with each other,” Felts said, looking back on their relationship now. “It was a void in my life that had suddenly been filled by another person who, apparently, had some of the same needs," he said. "And we just melted into each other.”

“In 1942 when I was 12, I realized I was gay,” the nonagenarian recalled. “If you came out, it really would cost you — your family, your job, all of your relationships,” Felts explained. “You would immediately be called a pervert.” Unfortunately, it tore Felts apart that he couldn't reconcile his love with his faith, as he used to follow church services regularly on Sunday. He went on to marry a woman, father his daughter, and later divorce his wife. All this time, he still remained in the closet about his true sexuality, and even when his daughter came out to him as a lesbian in 1995. Despite that, it took another 25 years for him to come out to her, and the world. “One day I was talking to Rebecca and I just happened to mention, I wish I had never left Philip,” Felts said.

"While we were all staying in during the coronavirus pandemic, Kenneth Felts was coming out." Great story! https://t.co/hfjUTkvBae

"I know I'm in an unusual position and I just came out just like that. I hadn't even planned on it or no, nothing, but I would think that if a person is contemplating coming out, they first need to check on what support systems are available to them," he said in his interview with USA Today. "When I came out there was... I wasn’t looking for anything and I, I have found it and I'm utilizing it. Back when I thought about coming out, there were no support groups." he added. Interestingly enough, he is not the only one at that age to come out of the closet publicly. “Some folks may come out after their spouse has passed away. I believe coming out is a process,” said Reynaldo Mireles, director of elder services at The Center on Colfax. “People are realizing this is a lot more common than they thought. It’s not as stigmatized because of the resources available to people,” said Levi Teachey, a board member at PFLAG Denver, a support organization for the gay community.