Drinking Coffee And Tea Every Day May Reduce Risk Of Stroke And Dementia, Study Finds

A study found that older adults who had at least two or three cups of coffee or tea every day or a combination of both (four to six cups a day) had a lower risk of having dementia or stroke as compared to those who did not consume either of the beverages. 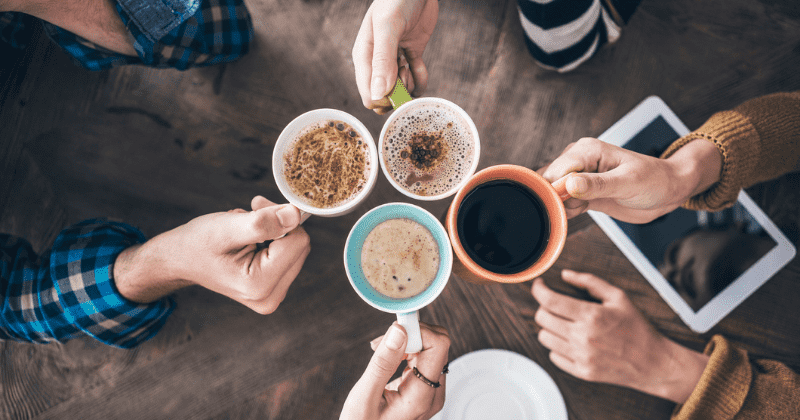 I just cannot get through the day without coffee and this habit has fetched me many warnings about my health. But guess what, a recent study suggests that drinking coffee or tea regularly may have long-term benefits for our brain health. A peer-reviewed paper published in PLOS Medicine, found that older adults who had at least two or three cups of coffee or tea every day or a combination of both (four to six cups a day) had a lower risk of having dementia or stroke as compared to those who did not consume either of the beverages.

For the study, researchers followed up with over 360,000 participants in the UK Biobank, which is a population health database, for over 10 to 14 years. For the study, researchers focused on adults aged 50 to 74 and exempted those who had a stroke or dementia in the past i.e. prior to the study. It was found that those who drank two to three cups of coffee or three to five cups of tea or both had the lowest risk of stroke or dementia out of all the levels of consumption.

As compared to those who did not drink coffee or tea at all, the ones who had two to three cups of the beverage had a 32% lower risk of stroke and a 28% lower risk of dementia, according to INSIDER. People who drank coffee also displayed a lower risk of developing dementia after a stroke. However, the same effect was not seen in those who only drank tea. Now both tea and coffee usually contain some amount of caffeine and studies have previously shown that this stimulant may have a shielding effect on the brain.

Research has also found an association between moderate consumption of coffee and better brain health, this includes a reduced risk of cognitive decline and even Parkinson’s disease. According to NBC, it has also shown a reduction in certain types of cancers, reduced risk of Type 2 diabetes, heart failure, and improved liver health among other benefits. However, the coffee drinkers in the Biobank study included those who preferred decaf. A 2017 study in Annals of Internal Medicine discovered that people who drank coffee lived longer than non-coffee drinkers. Moreover, it also showed the benefits of increased mortality regardless of whether the coffee was caffeinated or decaffeinated.

Individuals who consumed at least two to three cups of coffee each day had an 18% reduced risk of death. So what exactly protected their brain from the damaging symptoms of dementia and other health issues? Although the answer is not certain, experts speculate that it's the similar polyphenols in both beverages that may be having this positive effect. Now polyphenol is a family of micronutrients that are naturally found in fruits and vegetables. It's possible that this polyphenol profile or the common antioxidants in the two beverages could be acting as a protective barrier against brain degeneration and other health problems.

That being said, the authors of the study warned that the relationship between coffee, tea, and the brain is not causal. To put it simply, drinking copious amounts of tea and coffee will not prevent you from having a stroke or developing dementia. A recent study from Australia found that having six or more cups of coffee every day could increase the risk of dementia by a whopping 53% as compared to those who enjoy it in moderation (one to two cups a day.) Bottom line, moderate consumption of coffee or tea appears to be good for a health boost.

Disclaimer : This article is for informational purposes only and is not a substitute for professional medical advice, diagnosis, or treatment. Always seek the advice of your physician or other qualified health provider with any questions you may have regarding a medical condition.