He started from the bottom, now he's here - as a flight captain after over two decades of perseverance. 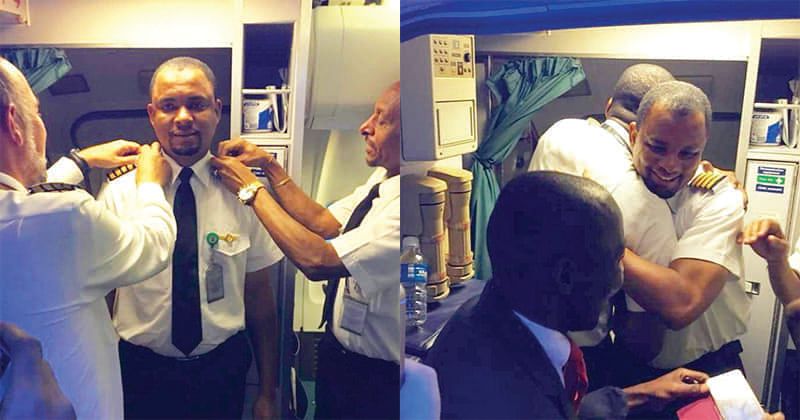 All too often, you hear that hard work and perseverance can get you places, but how often do you see it in action? Mohammed Abubakar exemplifies the legendary tale of rising through the ranks - after 24 years in the aviation industry, where he started working as a cleaner, Abubakar was recently made flight captain. The now-captain from Kano, Nigeria, got his foothold in the aviation industry quite by chance - he originally intended to apply to Kaduna Polytechnic to get his college diploma right after high school, but he missed the cut-off date. He got a job as a cleaner with Kabo Air, a local flight operator - making 200 Nigerian Naira ($0.50) per day. But that job led to a long career in the industry. "Many believed that I wouldn’t take the job because of the meagre money involved. I was later employed as ground staff with the airline. Through my service in the company, I worked in almost all the units, except security," Abubakar told DailyTrust. "That helped me a lot in the aviation sector.”

He Joined the Aviation industry 24years ago as Aircraft Cleaner. Today He is getting the Fourth Bar to becoming a CAPTAIN. Congratulations Mohammed Abubakar from all of us @AirAzman#FlySafeFlyAzman https://t.co/QVwapWYK3Q pic.twitter.com/DIHwPQOIPD

After eight years at the company, he joined Aero Contractors as a flight attendant - making ten times what he earned at his previous position. He chose to save up the money so that he could achieve his eventual dream of training as a pilot. “I joined a contribution system with my colleagues, and when it was my turn to receive the accumulated funds, there was a sizeable amount of money. So, I went to the managing director and sought his advice on my dream of training as a pilot," he recalled. “He was so happy, and supported me. That’s how I managed to sponsor myself for my private pilot licence in Canada, which marked my take-off as an aircraft pilot.”

Despite several hurdles, Abubakar finally received his commercial pilot license with a little help from his then-employer. He joined Nigerian company Azman Air as a pilot after eight years working at Aero Contractors. In 2018, after over two decades in the aviation industry, Abubakar earned his fourth bar as a pilot and was crowned captain, felicitated by his colleagues. Abubakar is the first to admit that his journey to the top hasn't been easy, and he even considered giving up at one point. “But I was able to weather the storm, and here we are today,” he said, in true pilot fashion. After all, weathering storms is what he's worked so hard to do.