The unbelievably regressive guidelines are basically a 'how to massage the male ego' starter kit and has got people cringing in horror. 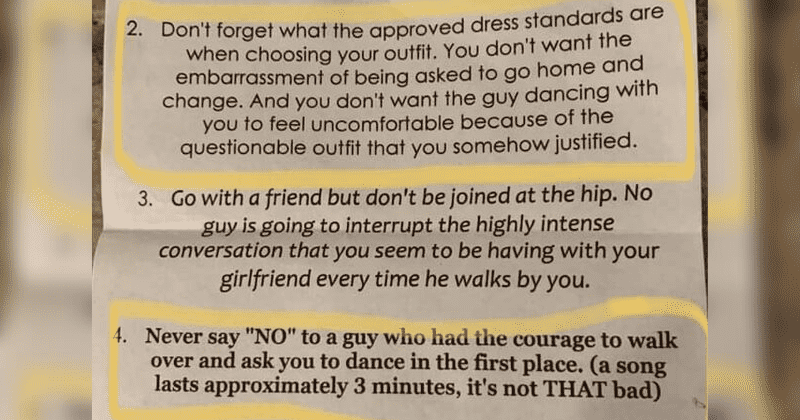 I still remember my first dance debut as a scrawny teen. I was a nervous wreck in the days leading up to it, constantly twisting my hands and reviewing my outfit choice a zillion times. When the time came, aside from the inevitable awkwardness of a bunch of jumpy teens in a room together, I had quite a jolly time. However, I shudder to think what would've been the case if we'd had to adhere to the insane guidelines set in this 'First Dance Kit' a Mormon church handed out to its youth. The unbelievably regressive guidelines are basically a 'how to massage the male ego' starter kit and as you can imagine, people are appropriately horrified.

The so-called 'First Dance Kit' came to the internet's attention after it was posted on Facebook by Ashlee Allen Feegan from Utah, who revealed that her friend’s 14-year-old daughter had received it at her Mormon church’s youth group. According to a report by Scary Mommy, the handout which Feegan first shared online in a Facebook group for former members of the Mormon Church, highlights a bunch of patriarchial "facts" to girls and could easily be mistaken for something straight out of The Handmaid's Tale.

Sharing a photo of the handout online, Feegan primarily highlighted two out of the six points listed. While the first point adviced girls to paint their nails, wear a little lip gloss, and brush their teeth (umm...), the second point took cringey dress code policies to a whole new level of uncomfortable. "Don’t forget what the approved dress standards are when choosing your outfit. You don’t want the embarrassment of being asked to go home and change. And you don’t want the guy dancing with you to feel uncomfortable because of the questionable outfit that you somehow justified," it read. Excuse me?

While this Mormon church clearly seems to have missed the memo on regressive dress codes, it isn't the only problematic policy they appear to have missed as the second point highlighted by Feegan takes the cake on most cringey. The 4th guideline listed in the 'First Dance Kit' reads, "Never say 'NO' to a guy who had the courage to walk over and ask you to dance in the first place. (a song lasts approximately 3 minutes, it's not THAT bad)."

Concluding the list with an equally cringey bang, the author advices young girls to "know your standards (for the strength of youth." I'm sorry, I don't understand how "never say 'NO' to a guy" and "know your standards could be a part of the same list. With this problematic 'First Dance Kit' giving people the creeps, it quickly went viral on other social media platforms as well, including Twitter where some users were reminded of their horrifying Mormon youth dance experiences.

Sharing her experience, Twitter user @sophiakaleolani wrote, "I went to a Mormon dance when I was 14. A guy I didn't like asked me to dance with him and I said no, and I received backlash from so many people there just because I said no. The Mormons there ended up guilt-tripping me to dance with him and he almost assaulted me. Stop this." @kizzie_leavitt had a similar story to share, tweeting, "I was once at one of these lovely dances and a young gentlemen who had been inappropriate and pushy with me in the past asked me to dance and I said no and he tattle taled on me and I got kicked out so I sat in the parking lot for 2 hours waiting for my ride."

Mormons really just be like that. I was personally lectured growing up to ask a woman to change on a date if the clothing they wore was arousing. 😅 https://t.co/NnucWqEh0q

One time at a Mormon youth dance I tried to convince my friend that it was okay to say no when a boy asked to dance. She ~dreaded certain boys asking her to dance. When they asked, she said yes. When I told her, "You can say no" she told me "that would be mean." https://t.co/HTvLQ45Lly