Who Is Christopher Macchio? The Opera Singer Who Gave Viewers 'Goosebumps' At RNC 2020

The Republic National Convention concluded with a rousing performance from Christopher Macchio, on Friday. 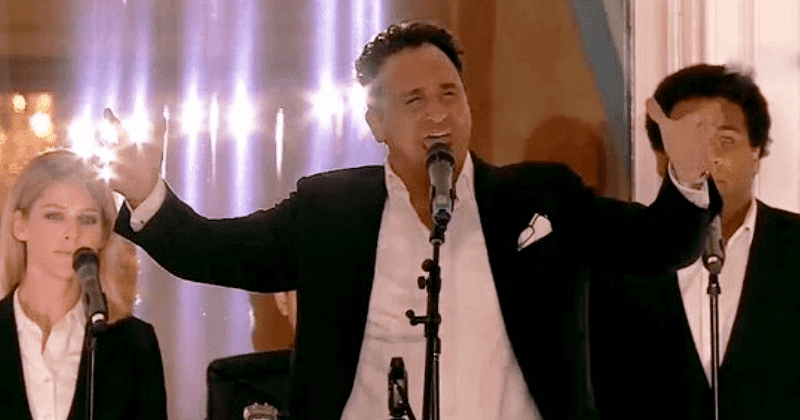 Tenor Christopher Macchio gave a rousing performance to conclude the Republican National Convention on a high on Friday. It was President Trump's personal request that spurred Christopher Macchio to give a rendition of some of the classics from the Blue Room Balcony of the White House. Republicans were blown over by Macchio's renditions of Nessun Dorma from Turandot, Leonard Cohen's Hallelujah, Ave Maria, God Bless America, and America the Beautiful. Christopher Macchio was flooded with messages after his performance at the White House. "I've been getting calls all night," said Macchio, reported Newsday. "I haven’t slept. My Twitter is blowing up as we speak. It's nuts."

Christopher Macchio is amazing!!! I could listen to him for hours. pic.twitter.com/C9yyGu1hGT

Donald Trump was chosen as the Republican nominee to be President at the party's National Convention and will face-off with Joe Biden at the November Presidential elections. The President had made a face-to-face request asking Macchio to sing at the convention. Macchio was eager to perform at the convention. "I felt like this was the moment to marshal all of my training and all of the wisdom that had been imparted in me with my love of country and support for our President to deliver the performance of a lifetime," said Macchio. The tenor thanked the President for offering him the chance to perform live at the White House.

It is with the greatest honor and pride that I accepted an invitation by our noble Commander-in-Chief @realDonaldTrump to perform LIVE! at @WhiteHouse before he accepts the Republican nomination at the @GOP National Convention 2020! pic.twitter.com/IjebbJwVF9

Who is Christopher Macchio?

Macchio hails from New York and is a classically trained tenor from the Manhattan School of Music, according to The Press of Atlantic City. He performs in classical arias in Italian, French, English, and German. He has also performed in Spanish, Portuguese, Hebrew, Turkish and Arabic. Growing up, Macchio suffered severe stage fright and hid his passion for singing as a result. He would eventually earn the confidence to enroll at Manhattan School of Music. Macchio credits vocal teacher, John Kuhn, who performed on NBC Opera Theatre, for having helped him overcome it. Since 2014, Macchio has been the youngest member of the New York Tenors with Andy Cooney and Daniel Rodriguez. "They call me the kid with the supernova voice," said Macchio.

What President @realDonaldTrump⁩ & the 1st family did for me tonight is something I’ll never forget. They stood & listened in regal nobility as I performed with tremendous love & pride in my heart for a nation grateful for their commitment to saving our culture & way of life. pic.twitter.com/DsmyOmbnqy

Macchio has already released two solo albums and has been working on a new one since the pandemic reached America. "I've started doing yoga and working to get back in shape," he said. "I've really been invested in myself artistically, mentally, and physically. The tenor's ties with Donald Trump go back to 2015 when he performed at Trump's New Year's Eve party. "Elton John canceled at the last minute, and someone suggested to Donald Trump that I be flown down from New York to Palm Beach in time for the concert. I received the call at 8 PM on December 30, agreed to perform, and flew down first thing in the morning on New Year’s Eve," Macchio told Millennium Magazine. Serena Williams, Martha Stewart, and Steve Wynn were among a thousand guests at Trump's party held at Mar-a-Lago. Trump described Macchio's performance as "phenomenal, unbelievable and incredible."

Trump also introduced Macchio to rock legend Rod Stewart. He would go on to sing with the Glenn Miller Orchestra at Rod Stewart's 70th birthday party that January. "There were all these celebrities there— Benicio del Toro, Jane Fonda. They gave me a standing ovation," said Macchio. He dreams of performing at the Metropolitan Opera in New York, Covent Garden in London, and La Scala in Milan.

Donald Trump accepted the party's nomination during the convention. "My fellow Americans, tonight, with a heart full of gratitude and boundless optimism, I proudly accept this nomination for President of the United States. The Republican Party, the party of Abraham Lincoln, goes forward united, determined, and ready to welcome millions of Democrats, Independents, and anyone who believes in the greatness of America and the righteous heart of the American People," said Trump, at the convention, reported CNN.