Kurt Russell And Goldie Hawn To Play Mr. And Mrs. Santa Claus In 'The Christmas Chronicles 2'

The iconic real-life couple starred together in the 2018 film 'The Christmas Chronicles' that was viewed over 20 million times just in its first week of release on Netflix. 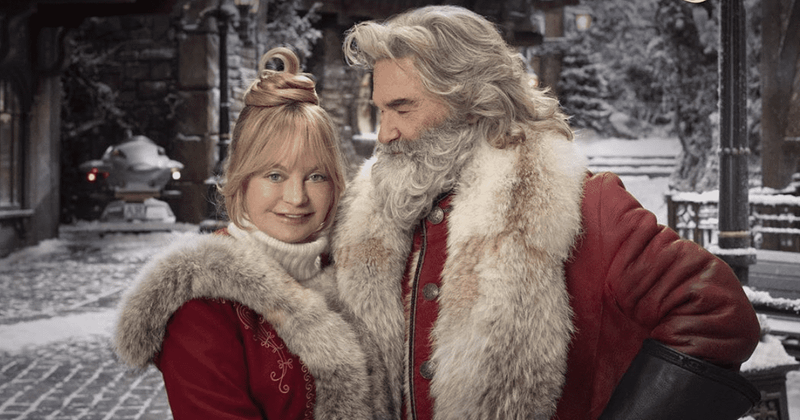 Hollywood's 'It Couple' Goldie Hawn And Kurt Russell set our hearts aflutter every time they make an appearance together. Their endearing romance that only seems to be getting better, despite having been together for 36 years, is couple goals in the true sense of the word. Not just off-screen, the couple is also known for its unmistakable on-screen chemistry. And they proved it yet again last year when they starred together as Mr. And Mrs. Santa Claus in the Netflix movie The Christmas Chronicles. Although Goldie Hawn's role was a fleeting appearance, it was just about enough to satiate our love for the golden couple that was last seen together on-screen over 30 years ago in the 1987 movie Overboard.

But guess what? You don't have to wait another three decades while you count your gray hair to see the stunning couple together again because when Kurt Russell returns to his role as Santa Claus in The Christmas Chronicles 2, joining him will be none other than Goldie Hawn herself. The 74-year-old actress will play Mrs. Santa Claus again in the Netflix sequel directed by Chris Columbus, the mastermind behind Harry Potter and the Sorcerer’s Stone, Mrs. Doubtfire, Home Alone and Stepmom, reports People. Director Chris Columbus said it was a pleasure to have the famous couple who also brought a "lot of laughter" on the set. He said, "There's a tremendous amount of respect there and a tremendous amount of love and trust, partially because they’ve been together for so long. They just get along beautifully."

Also sharing the ecstatic news was Goldie Hawn herself. Unveiling the first look of the movie that will hit Netflix in 2020, she wrote on Instagram,  "A year later and I’m still ringing Santa’s jingle bells. I couldn't be happier to be working on @christmaschronicles again with Kurt Russell, my real-life Santa."  Although Goldie Hawn made a cameo in the first installment at the very end of the movie, we hope she plays a longer role this time around because who wouldn't want to watch this beautiful couple light up the screen over and over again.

Meanwhile, it is worth noting that Goldie Hawn was not the only other member of the family to be part of the first movie. The couple's son Oliver Hudson played the late father to the film's two lead child characters — Teddy (Judah Lewis) and Kate Pierce (Darby Camp who was also seen in Big Little Lies). For those who are yet to watch The Christmas Chronicles, just know that Santa is watching you. In the first week of its release on Netflix, the movie was streamed a whopping 20 million times, making it one of the most-watched and successful Christmas films ever.

"Even in his successful career, (Kurt Russell) has never had that many people see one of his movies in the first week ever," Netflix Chief Content Officer Ted Sarandos told Business Insider last year. "Even movies that go on to make $1 billion don’t typically do that in the first week," he added, reports Scary Mommy. The movie is centered on Kurt Russell's Santa Claus as he tries to save the spirit of Christmas with two kids mourning the loss of their father. However, what really drew viewers in and kept them watching was, not so surprisingly, the ever-charming Kurt Russell. "The real charm of this movie isn’t exactly the plot; it's Kurt Russell playing Santa. He adds this determined edge to the film that makes the character all the more believable," added Scary Mommy.

The sequel will have Kate Pierce unexpectedly reunited with Santa Claus as Belsnickel (Office fans, rejoice!) threatens to destroy Christmas for everyone. For those who haven't heard of Belsnickel before, he is a "loud, cantankerous guy, dressed in furs and carrying a bundle of birch switches, who visits children in the weeks before Christmas, asking whether they've been nice or naughty in the preceding year", as explained by Penn Live.  17-year-old actor Julian Dennison will play Belsnickel. He is best known for his roles as Ricky Baker in Hunt for the Wilderpeople (2016), which is said to be the highest-grossing New Zealand film ever, and as Russell "Firefist" Collins in Deadpool 2 (2018). Kimberly Williams Paisley, who plays Claire, and Judah Lewis, who plays Teddy, will reprise their roles from the original in the sequel, while Jahzir Bruno will play the character of Jack.

Rumors are also doing the grounds that there's a chance The Christmas Chronicles 2 will have more members from the Hawn/Russell family. Apart from Oliver Hudson, Hawn's son from a previous marriage, who is set to reappear in the sequel, the couple's other children, Kate Hudson, and Wyatt Hawn Russell, could also be part of the film, suggest rumors. "You never know," said director Chris Columbus regarding possible cameos from other family members, leaving us hoping for more next Christmas.