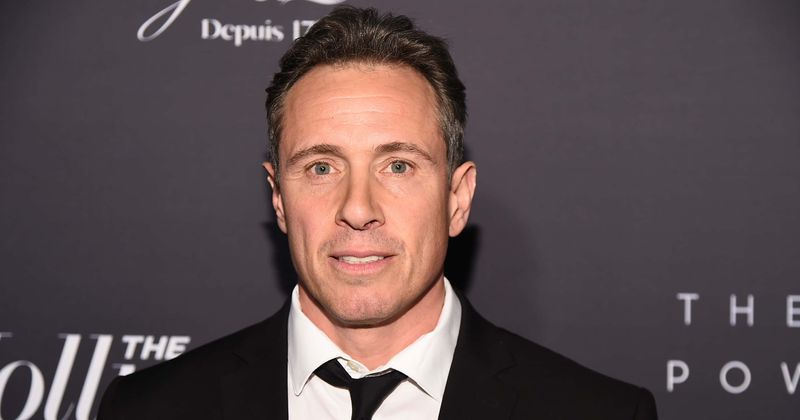 Things just got a bit cheeky for Chris Cuomo as the CNN anchor was apparently caught on video naked in the garden of his Hamptons mansion during a yoga session filmed by his wife, Cristina Greeven Cuomo. According to Page Six, the video allegedly caught the younger brother of New York Gov. Andrew Cuomo in the nude from behind through the large windows of their home, during an Instagram Live session. The footage was quickly deleted but as we all know once it's on the Internet, it's there forever.

The video was filmed around May 27 and fans were quick to take a screenshot of it. Reps for the host of Cuomo Prime Time at CNN and his wife didn’t respond to multiple calls and emails to confirm if that was really him. The father-of-three had contracted the coronavirus after which he had been broadcasting from his basement while under quarantine. According to The Daily Mail, in late March, the 49-year-old journalist revealed on his show that he had tested positive for COVID-19, which left him shivering from high fever and hallucinating. His wife and their 14-year-old son, Mario, later contracted the illness as well. After spending several weeks quarantined in the basement, around mid-April the TV presenter captured on video the reunion with his family. "This is the dream. Just to be back up here doing normal things," he said as he embraced his wife.

Fans were quick to react to the screengrab on Twitter. RoadMN wrote: First he exposed his family to COVID, now he's just exposing himself. @CNN Left-wing opinionator @ChrisCuomo apparently caught naked in wife Cristina's yoga video. KehdeMelody shared: He just hangs outside naked? I'd hate to live in his neighborhood. However other viewers seemed more than happy. turnyoudown joked: I actually like @ChrisCuomo. He & his brother @NYGovCuomoare men of character. Thank god it was #Cuomo's derriere caught on camera and not @realDonaldTrump's. Our eyes would never recover. TamoTweets said: Chris Cuomo hanging out naked in his garden is my new 2020 aesthetic. Find me casual, in the nude, surrounded by my plants, reading the major headlines, and getting ready to address the people. Cuomo's alleged nudity prompted Senator Ted Cruz to mock CNN, tweeting: It’s about time CNN embraced transparency!

Too bad that pole is in the way 🤣

Buzzfeed dedicated an entire article on the very fit Cuomo as being a "daddy". Terry Carter wrote: While everyone has been tweeting about their thirst for Gov. Andrew Cuomo lately, I've turned on my notifications for Chris Cuomo's Instagram photos, because I know who's the real daddy* in the family. The article featured 25 of the journalist's "hottest" photos. Cuomo is also a real daddy, meaning father to 3 kids. Recently he showed off his best dad moves in a hilarious dance with his teen daughter, reports Upworthy. Apart from Bella, Cuomo has two other children with his wife  Cristina. He's has a son Mario, who is 14 years old, and younger daughter Carolina, who is 11 years old. Cuomo's clip on TikTok, shows her dancing to a mash-up of Megan Thee Stallion‘s "Savage",  Rihanna’s "What’s My Name", and Kesha‘s "Cannibal". It looks like she choreographed the whole dance sequence, too. The video got funnier when her dad made an entrance.

"What does the world need to see right now? @ChrisCuomo and his teenage daughter dancing to DaBaby’s ‘ROCKSTAR’ ft. Roddy Rich," writes Cockburnhttps://t.co/TVkDrNXweG

On April 27 Cuomo shared that he had finally tested negative for the coronavirus. "I tested negative. I have both antibodies: The short-term one and the long-term one. So I’m lucky, right?" He explained on his show Cuomo Prime Time. "Is this good news or not? I thought I was going to have this big, great news after all the bad news I’ve given you about me and my family. What does it mean that I have the antibodies? Am I really immune? Do they know? There’s a lot of confusion about what it does and doesn’t mean." The Cuomos live in New York, one of the worst-hit states in America.