Children Who Grow Up With Grandparents By Their Side Are Happier

Research suggests that being close to one's grandparents can reduce the risk of depression in adulthood. 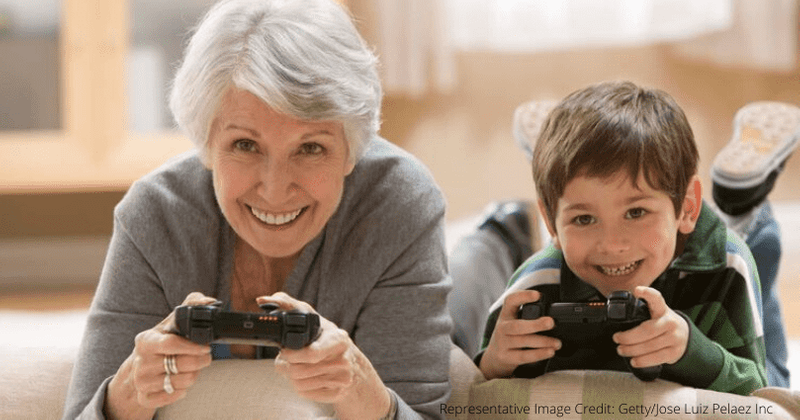 If your grandparents had been involved in your upbringing, it's hard to deny the strong bond across generations. Whether it's the extra batch of cookies grandmom makes and or the fascinating tales grandpa shares, fostering a special relationship with one's grandparents goes beyond just the sweet, small stuff. According to research, it can even make a child happier and more secure as they venture into adulthood. So what do these benefits entail, exactly? According to Motherly, there are at least five reasons why growing up with grandparents is great for your child. And science backs it up too! Oh, and it's a great option for parents too 'cause, hello... free babysitting.

Jokes apart, one amazing reason to spend time with the grandparents is that it protects children from being depressed adults. Based on a 2014 study at Boston College, it was discovered that there was a strong link between grandparents and adult grandchildren to lower rates of depression. What's great about this equation is that both parties involved were less likely to be depressed as they aged. A grandparent can learn and be open to new ideas and experiences when interacting with grandkids and the latter can receive pearls of wisdom, only older folks would know out of experiences. Win-win!

According to a study, grandparents who look after their grandkids tend to live longer. Taking care of kids keeps them physically active and helps relieve stress, and social interaction helps keep the brain active and healthy. As long as its in moderation. "You want to make sure that you find that right balance where you are doing what you can to stay active, doing good for the folks that you're helping out with, but don't do too much where you get to the point where you're overly stressed," said Dr. Ronan Factora of the Cleveland Clinic.

“If parents regularly involve grandparents in their child’s life early on, a child can develop real emotional closeness to the grandparents and begin to see the grandparent as a source of strong social support. So a child will feel that they have other adults, aside from their parents, who love and care about them in the same way, and this adds to their sense of stability and security,” said Kimberly Agresta, a licensed clinical social worker and the co-founder of Englewood’s Agresta. A study out of the University of Oxford found children who are close to their grandparents have fewer emotional and behavioral problems and are better able to cope with traumatic life events, like a divorce or bullying at school. So for those who may find it difficult to open up to a parent, can talk to a grandparent instead. Grandparents can provide a sense of security that some kids may not find elsewhere.

Children who have what is called an intergenerational identity feel more in control of their lives, according to research by Dr. Marshall Duke and Dr. Robyn Fivush from Emory University. What does this mean? Sharing stories of family history can help children learn how they're part of a bigger story. They'll learn to avoid narcissistic tendencies and will learn to be more grounded and focussed. They'll learn to be in control of their own lives and develop a sense of self-worth and resilience without losing empathy and becoming solely self-involved. Knowing how your grandparents came from a foreign land or had their own share of adversities will help kids learn to cope and bounce back from their own problems.

An obvious one. A generation gap can come with its share of conflicts with regard to different opinions and thoughts on many issues. Having a close relationship with one's grandparents can bridge that divide.  According to a study involving 1,151 Belgian kids aged 7 to 16 , kids who are close to their grandparents are are less likely to show bias towards older adults. We don't want to be raising ageist kids, so the best way to ensure children have a healthy attitude towards older people would be to make sure they're surrounded by them in their early years.  “There’s a sense of comfort in leaving your child with a family member who loves them and is similarly invested in raising them,” Agresta shared. “It’s also nice to have the support of your own parent when you’re raising your child.”   And we couldn't agree more. How lucky are people who have another set of parental figures who are looking to care for you? So, thank you, Grandpa and Grandma!

grandparents love is one of a kind

To each their own but I feel kids who grow up with grandparents around are always super sweet and kind :)