Chained Monkey Forced To Lift Weights, Do Push-Ups, And Ride Bicycle For Entertainment

A video released by PETA Asia shows the horrible abuse a monkey has been put through to adhere to its trainer's words. 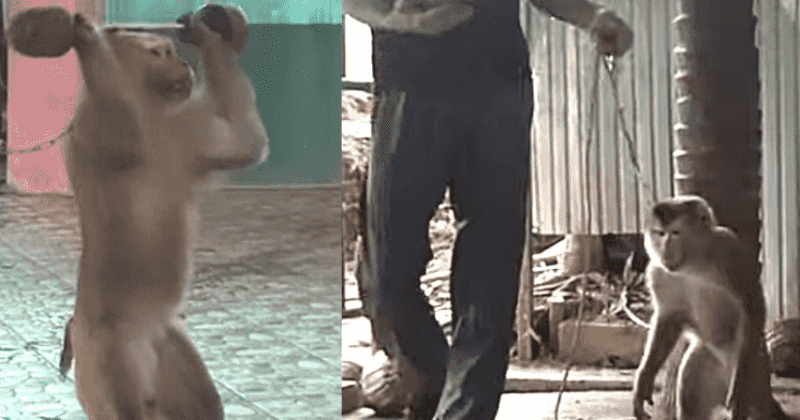 We often read or hear about the deadliest animals on the planet. Snakes? They can kill you with a bite. Sharks? They'll chomp you down if you give them a taste of blood. Wild animals? They're part of a food chain and deemed uncultured for the atypical human. Yet, if you document the number of deaths caused by any of these animals and compare it with what humans have done, the former pales in comparison.

This goes to show we are, in fact, the deadliest animal on earth and not the other way round. Our quest for profit, recognition, and dominance of the world blurs the lines so much that we've comfortably surpassed any measured levels of cruelty possible. This gut-wrenching story of a chained-up monkey in Phuket, Thailand, sheds a light on the perverse nature of humans who'd do anything for profit.

According to Mirror, the said monkey is put through such torture that it lifts weights, slam dunks balls, does push-ups, and sit-ups to entertain a few bored tourists. For its handler, the monkey is nothing but a money-making machine, the more absurd things he can get the ape to do, the more money he can earn and when the monkey finishes its show, right back into a "wired cage" it goes.

The four-year-old monkey named Ning Ning has been forced into subordination and taught several tricks for a "spectacular" show displayed for tourists and holidaymakers wandering aimlessly in Phuket. In a video captured by animal rights group PETA, we even see it attempt slam dunks and riding a bicycle.

These caged monkeys had no choice but to eat, drink, sleep, defecate, and urinate all in the same small area 😖

If you ever see a monkey being forced to perform tricks, make sure you understand the truth behind it! Then tell a friend who might not know. https://t.co/DrbMqcocJP pic.twitter.com/XelzY7TnIp

In the video, where the handler is "training" the ape, we can see a chain tied around its neck as it does a variety of training drills that would later be showcased in front of wide-eyed tourists. According to Daily Mail, the footage of Ning Ning was recorded secretly by PETA at the Phuket Zoo in an undercover operation that shows the monkey do things that it doesn't in a natural setting. Reportedly, Ning Ning was also dragged around in temperatures higher than 86°F (30°C) and he can be seen walking on his hind legs regularly, something monkeys aren't known to do a whole lot. The trainers show utter disregard for Ning Nong's wellbeing and have even knocked a few of its teeth so that he wouldn't be able to defend himself.

I am so sad that these poor animals are on display for the enjoyment of humans. Think people think #savetheanimals #someonehelpthem #thisneedsstopped

Jason Baker, senior VP of international campaigns, PETA, listed out a few instances where monkeys are forced to do their handlers' bidding. "Monkeys don't choose to walk on their hind legs, wear clothes, ride bikes, or perform other meaningless and humiliating tricks - they've simply learned to fear what will happen if they don't," he was quoted in the Daily Mail as saying. "Circus trainers break monkeys' spirits using violent methods that rely on the fear of punishment. They force animals into a lifetime of slavery."

What kind of trick can you do covered in urine and faeces that could be described as entertainment? This is abuse written large. No less. For shame. 😖😭

The gut-wrenching part of the ordeal is that such monkeys have no awareness of the kind of life they could have had for themselves. Talking about how such monkeys are reared, Baker stated that they are "snatched from their mothers at birth" and "deprived of everything that's natural and important to them. Exhibitors who force animals to perform do so because they profit from it, but it's the animals who suffer."

While this is a large trend in a lot of countries, such instances have vastly been reduced over recent decades as people have been more aware of animal abuse. Baker continued: "The world is outraged by gimmicky animal acts, which is why so many animal circuses are closing their doors and countries are banning them... Public opinion has changed, and forcing wild animals to perform is no longer the way to draw a crowd, but there's still much work to do."

Horrific abuse!! These people need to be in prison for such abuse!