Although the iconic singer left a lasting impression at the Paris fashion week with her stellar outfits, fans are concerned about Dion's recent weight loss. 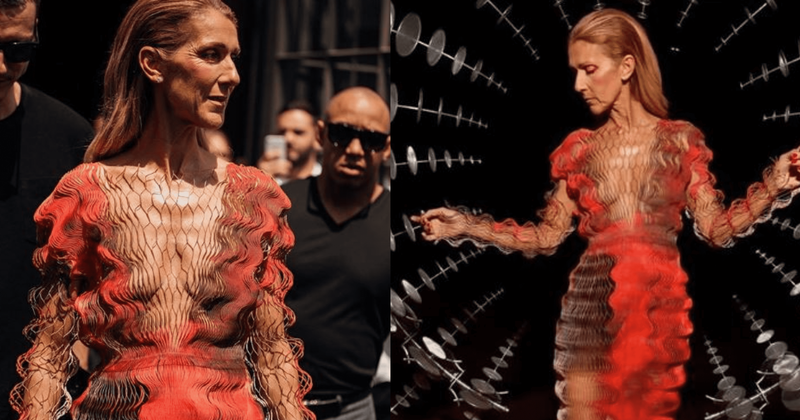 Céline Dion is by no means one to shy away from fashion risks. Even at age 51, the singer continues to be one of the most notable fashionistas in the music business. Her head-turning appearances at the Paris Fashion Week further confirmed our belief that she is a fashion goddess who can pull off just about any look. Although she established herself as a style icon a long time ago, 2019, in particular, was blessed with several chic Dion looks which had us bowing down to the queen. However, the singer's fans have been growing increasingly concerned about her recent weight loss and a stunning Iris van Herpen couture outfit she donned to the Haute Couture Paris Fashion Week added to the buzz.

According to Vogue, the Ashes singer's 3-D printed ensemble is one of Iris van Herpen's signature pleated creations. The eccentric designer showcased her latest out-of-the-box collection at Élysée Montmartre on July 1 and Dion and her stylists Sydney Lopez and Pepe Muñoz chose the red and black transparent netted piece to match the occasion. Dion and Lopez posted photographs of the look to their social media accounts in which the mother-of-three looked radiant with an almost otherworldly beauty.

However, another picture posted by Vogue Australia on Instagram has given rise to a severe outcry from the singer's fans who flooded the comments section with concerns about Dion looking "scarily thin" and that the outfit was not a good choice for her. The dress symbolizes degeneration of human tissue, vitality and all things of life. A slow decomposition. This is a sad look. I’ve seen many an old lady wrapped in finer grace with eternity beaming from their hearts. This is the opposite, wrote Instagram user @annishka_o_art_photo.

While some users went as far as to accuse Vogue Australia of purposefully posting a supposedly unflattering photograph of Dion, others took the traditional body-shaming route and found it appropriate to comment on the singer's body. I've seen her in a few posts and she is seriously underweight. Not a good look, commented @gatekeeper63, while @missrazia wrote, Someone needs to talk to this women, she is not a good representation of beauty and fashion 😔Her body is frail; she looks ill. Poor thing 😔

This isn't the first time Dion's fans and naysayers have commented on the singer's noticeably smaller frame. The My Heart Will Go On singer slammed her body-shamers back in January while speaking on The Dan Wootton Interview podcast. According to a report by USA Today, she said, "I'm doing this for me. I want to feel strong, beautiful, feminine, fierce and sexy. It's always been a part of me... And I'm 50 years old, it's not to try to take chances, it's what I want to wear... I want to do whatever I choose to be. I have an opportunity to wear haute couture and the things that makes me feel beautiful, strong, fearless, feminine, attractive."

Fantastic my dear as usual.
But I'm a little worried bout' your health, sometimes you look too much skinny and weak. And tired. ¿Are you ok, hunny?

Dion added, "If I like, I don’t want to talk about it. They can discuss it. Don’t bother, don't take a picture. If you like it, I’ll be there. If you don’t, leave me alone." She addressed the concerns again in April while speaking to ABC News. She reassured her fans that although she had lost a few pounds, she was doing just fine. "It's true that I'm a little thinner. Everything's fine, nothing's wrong," said Dion. Further explaining her weight loss, the singer revealed that she has taken up ballet to fulfill her lifelong dream.

Speaking to PEOPLE about her new passion, the singer said, "Dancing has been in my DNA all of my life. It’s a dream. And so hard! I do this four times a week. People say, ‘She’s a lot thinner’ but I’m working hard. I like to move and [weight loss] comes with it." Whatever may be the reason behind her slimmer frame, Dion claims that she is in great spirits. "I feel stronger, more beautiful, more grounded. There's this power and this strength that comes with that maturity," said she.