Rebecca and Glen Maxwell ditched their $17,000 wedding to get married in jeans and t-shirts to show people that weddings don't have to break the bank. 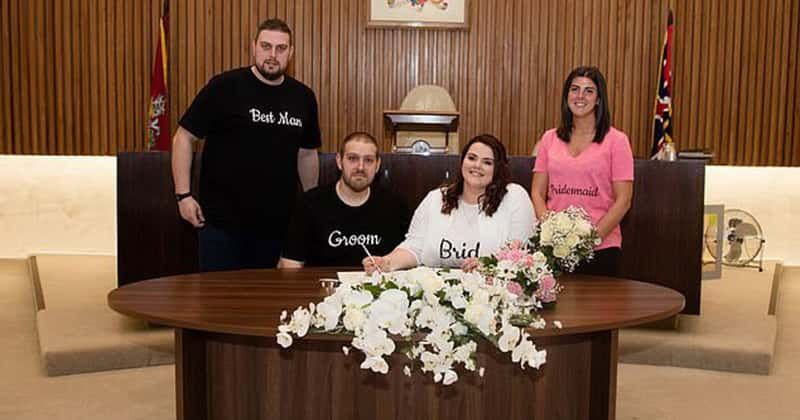 Many people have aspirations about fairytale weddings, and that's great, but it also costs a lot of money. A LOT. But of course, you don't have to break the bank on your wedding for it to be magical, as one lovely couple demonstrated. Rebecca and Glen Maxwell got married earlier this year wearing jeans, sneakers, and "bride" and "groom" T-shirts at a registry office ceremony to show that a beautiful wedding didn't necessarily need to be unaffordable.

The couple got engaged in 2016, and quickly began to plan a massive wedding. But the more they planned, the more the costs began to add up, and the couple realized that a fancy white wedding just wasn't them. "When we were planning our wedding, we started doing everything to please other people," Rebecca told Metro UK. "Our guest list was getting out of hand. You feel like you have to invite people because you don’t want to upset them rather than because you want them there. We had spent hours looking through Pinterest at all the dresses, cakes and decorations and you do get sucked in." One evening, between agonizing about their plans and budgets, Glen told Rebecca, "We could get married in jeans and T-shirts and I’d still love you." And that's exactly what the couple decided to do. Instead of going through with the £14,000 ($17,250) wedding they were originally in the process of planning, the couple exchanged vows at their local town hall with 40 people in attendance. They wore customized T-shirts that said "bride" and "groom", and had similar T-shirts made for family members and the rest of their wedding party, asking all the attendees to dress just as casually. They took their guests out for a post-wedding dinner, and their wedding cake was an assortment of cupcakes and a sheet cake with a photo of the couple printed on top. All in all, they spent just upwards of £1,000 ($1,232) on their wedding.

Now, the Maxwells are sharing photos of their big day to show other couples that they don't need to feel pressured into an expensive wedding. "I want to show other brides that if they don't have a big budget, it doesn't matter. They don't have to spend a fortune or put all that pressure on themselves," Rebecca told The Daily Mail. "What was special was that we were going to join together and I was going to have the same surname as my little girl. A big dress or fancy day, that all paled into insignificance." She added, "I do really believe that so many people lose sight of the real reasons to get married. It becomes like a big expensive show, a production for everyone else and the real reasons are lost in all that."

And according to Rebecca, as long as you marry the person you love, with your loved ones around you, your day will be special no matter how much money you spend on it. "Me and my husband are still married just like all those people who are in £20,000 debt," she said.