Mike Jines has refuted the claims of welfare groups, saying he shot the elephants in self-defense. 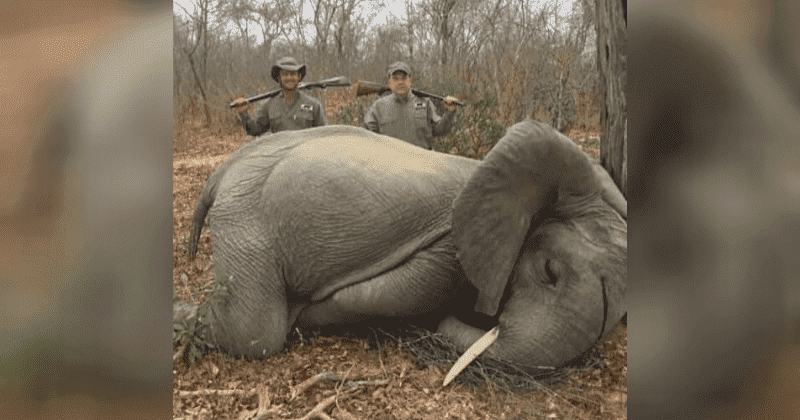 It's astounding the type of things rich people can get away with. American businessman Mike Jines shot two elephants and had the audacity to pose victoriously, standing next to their limp bodies, reports CBSNews. Meanwhile, Metro reported that the two elephants Jines and his friend killed in Zimbabwe were babies. The two have faced a massive backlash from animal welfare groups and the general public after Delezenne and Jines posed with the animals with huge smiles on their faces.

Although no official statements were available to confirm the age of the elephants, Jines has received a lot of threats for his action. Per reports, Jines is a wealthy businessman and partner with a company called TopGen Energy. The campaign against him was spearheaded on social media, with people urging others to stop using his company's services. Meanwhile, Jines hit back against the criticism and said his side of the story was quite different from what was being circulated. Explaining his side of the story on a forum, per CBS46, Jines said: "The hunt started with a bang... literally. Less than thirty minutes into the first morning of the first day we experienced a double-elephant cow charge. This was obviously a first for me but it turns out it was a first for Buzz as well. We saw a group of cows from the road and decided to follow them to see if a tuskless was in the group."

In search of tusk-less elephants to slaughter, this ‘man’ killed these two teens from a herd of females, claiming they charged him. Then he posed with, and between their dead bodies. These babies were mourned by the herd. Greed & Ego! 😒@Protect_Wldlife @rickygervais @PeterEgan6 pic.twitter.com/kzWr4R33p1

He continued: "We caught them quickly and identified a tuskless. We positioned ourselves to get a good look at the tuskless and concluded that since it was just Day 1 we would pass. An instant later she came in an all-out charge. Buzz and I both fired two shots apiece and she went down. Then from behind us a large one-tusked cow charged at full speed."And that's when he fired, he said "We each fired one shot and she crashed to the ground with her hind legs out behind her, indicating the speed and determination of her charge. The two cows were less than forty feet apart with Buzz and I in the middle. Fortunately, we had positioned ourselves in some open ground so we had good visibility when the charges came. Certainly, a little more excitement than we had bargained for on Day 1."

In an email statement with CBS46, Jines defended his actions and said the two elephants were shot in a designated safari area in accordance with both Zimbabwe and the United States' laws and regulations, and that he shot in self-defense. He said: "The two elephants that are shown in the photos were shot in self-defense, in an unprovoked charge and both elephants were fully mature cows, not juveniles. While I can appreciate that hunting can be polarizing and that views on hunting can vary materially, I am sure that you can appreciate what it is like to deal with the vitriol particularly when the underlying information, in this case, is inaccurate," he added.

People, however, wouldn't back down as they continued to maintain that hunting animals as trophies should not be permissible. Karen Salem wrote: "He’s the face of evil. They should look up his house and take justice on him and his family for killing two baby elephants." Kimberly Allen wrote: "What about this makes you feel that cocky and arrogant. Horrifying." Linda Gabaldon wrote: "I pay good money to take my grandchildren to the zoo to see these Beautiful animals and you think it’s awesome to kill them what did they ever do to you. May you Rot in hell. That is something the devil would be proud of just like you two."