MIL Tells Bride She'll Be Wearing A Wedding Dress To The Ceremony, Calls Bride A S#ank

"It is MY son's wedding and I am paying for over half of it," the MIL 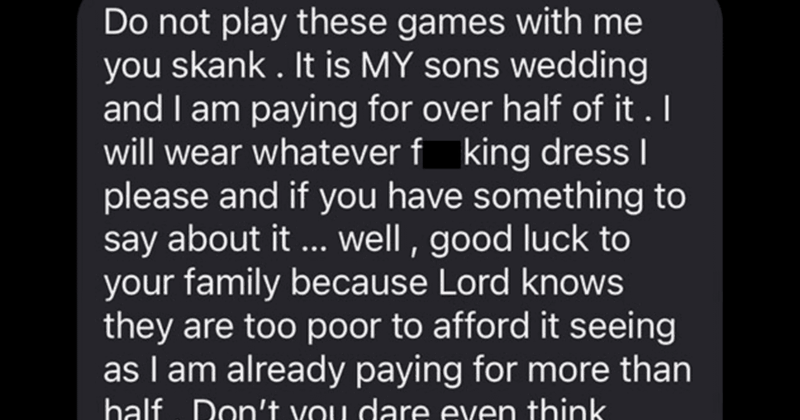 The term "monster-in-law" is something that is usually used to describe overprotective mothers who hate seeing their son marrying and prioritizing his new life with his wife. It is a term used to describe when this feeling of possessiveness brings the worst in them. While the extent of this differs from person to person, this is a perfect description for one mother-in-law who was not even trying to put on a pretense of acceptance with her future daughter-in-law. The troubled bride-to-be put up her shocking interaction with her MIL online and the progression of their exchange just went from bad to worse, with maybe a slight note of hope from her fiancé who took her side in the matter.

The unidentified woman shared screenshots of her conversation with her future MIL on a Facebook group seeking advice on how to handle the stunt her fiancé's mother was about to pull on their wedding day. In the post, she said that she was at an absolute loss for words. She learned that her MIL had already found a dress to wear to their November 2022 wedding and was curious to see what it could be. Much to her shock, her MIl casually told her that she had already seen it when she showed her the pictures from her wedding. The dress she had chosen to wear to her son's wedding turned out to be her own wedding dress.

"What do I even say here please help me," she pleaded as she explained that she had not informed her fiancé about his mother's antics. "I will be praying every night that she texts me back 'sike!' but unfortunately this woman is just unimaginably vile and two-faced," she added. Wearing white to a wedding is a faux pas let alone wearing an actual wedding gown itself. In the texts she had exchanged with her MIL, the woman tried to be nice about it and told her MIL that they could help her find something similar in colors that would go with the color scheme they would pick for the wedding.

In response, the MIL said, "Do not play these games with me you skank. It is MY son's wedding and I am paying for over half of it. I will wear whatever f***ing dress I please and if you have something to say about it... well, good luck to your family because Lord knows they are too poor to afford it seeing as I am already paying for more than half. Don't you dare even think about trying to ruin this moment for me." She added, "You know the rest of my children will not get married in my lifetime and this is the only wedding of my children that I will be a part of." As if that was a good enough excuse for insulting his son's future wife.

The woman did eventually tell her fiancé about this rude exchange and he was rightfully enraged at his mother. He assured her that he would speak to his mother about her behavior. "That was completely unacceptable. If she doesn't want to be respectful to you and your decisions then she will not be there, simply put," the son told his fiancée. He even suggested skipping the reception altogether. He kept his word and told his mother off for being disrespectful to his fiancée. In true monster-in-law- fashion, she tried to make it seem like the woman was disrespecting her by sharing what she had said with her son as well as on the Facebook group even calling her expletives.

The woman continued to be patient with the MIL she referred to as "Sue" telling her that her white wedding dress was inappropriate to wear to her son's wedding. "I'm sorry you feel this way but please think about how your behavior will affect Mark and OUR day," she said referring to her son. The exchange also made its way to Reddit and people were appalled at the MIL's behavior on another social media platform as well.

One person wrote: I think if my MIL called me a skank I’d be declining to contact her ever again. Another person said: I swear that if I ever see anything like this at a wedding, I'm going to point and laugh and get everyone to join me in shaming MIL.