"Having the ashes attached to my nails felt like he was holding my hand, I knew it wasn't the same as him really being there, but it was as close as we could get," said the bride. 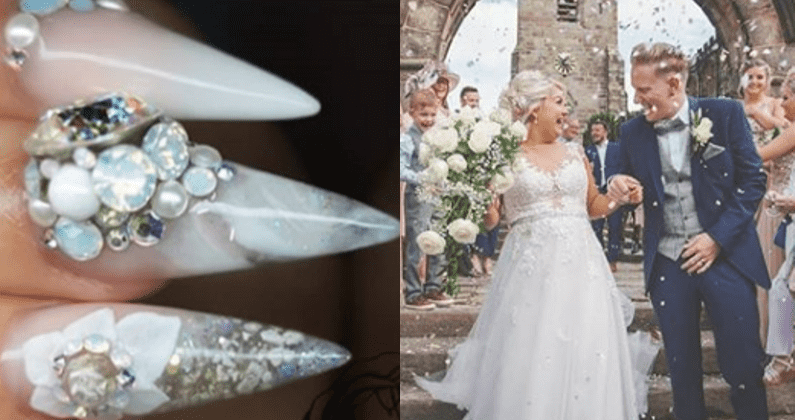 After losing her father to cancer, a bride had her dad's ashes glued to her acrylic nails in a way to honor him and fulfill his promise of walking her down the aisle. 26-year-old car dealer Charlotte Walton married 33-year-old Nick in August and always dreamed of having her father at her wedding. Her cousin Kirsty who is a nail artist came up with the idea of get her nails painted with her late father's ashes so that he could in a way be there for his daughter on her big day.

She said, " Kirsty is the queen of nails and I thought her idea was amazing. I was always a huge daddy's girl, we all were, whenever we asked for anything he would say no first but then he would feel bad and would do it five minutes later. Having the ashes attached to my nails felt like he was holding my hand, I knew it wasn't the same as him really being there, but it was as close as we could get.'It was a unique thing to do but I loved it, I felt like he was able to walk me down the aisle, which I knew was something he really wanted to do. I suppose the funny side of it was that people asked me what I would do with the nails once they fell off as if I was going to throw them away. I have of course kept them and now they're framed with decorative crystals all around the frame in my home. I loved having him there with me even if it was just in spirit, but with his ashes attached to me as I walked to wed my husband, it felt like the next best thing. The wedding was incredible, and everyone loved the nails."

When Mick, her father, was diagnosed with cancer, they found out that it was incurable form of the disease. This made them realize that they had to move things quickly if they wanted her father to be a part of her special day. Unfortunately, her father didn't make it and Charlotte said that she was heartbroken when her father lost his battle because she knew how much he wanted to see them marry. She'd always dreamed of her father walking down the aisle and giving her away to the love of her life. She said, " My dad loved Nick, they played golf together most weekends and he had my dad's blessing from day one. When we lost him, I didn't know how I could still make sure he was walking with me before I said my vowels until Kirsty said she could incorporate his ashes into my nails. I immediately thought it was a really sweet idea and wanted to go ahead with it."

Kirsty Meakin, the artist behind the nail art, put up a youtube tutorial on the unique wedding nails and even posted pictures on Instagram. She wrote: The full tutorial is up on my YouTube channel. These nails were made with love. I created these wedding nails for my cousin Charlotte. Her father (my uncle Mick) sadly passed away at the end of April this year. He was an absolute legend, patient, kind and loved by so many. It was so sad that he couldn't be there to walk his daughter down the aisle on her big day. This got me thinking..... I wanted Charlotte to have her Father with her is some way or another. I came up with the idea to use Mick's ashes in her nails. This way he would be there holding her hand as she walks down the aisle. This was an emotional day for us both and we are so please with how they turned out. I'm going to remove the nails for Charlotte after they have grown out for around 4 weeks so they will be preserved and kept in a keep sake box as a beautiful memory of the day. What better way to have used a tiny amount of ashes to bring such happiness.