Doctor Marries Himself In Wedding Ceremony After Partner Breaks Off Engagement

The 33-year-old went viral on social media for his wedding-of-one. 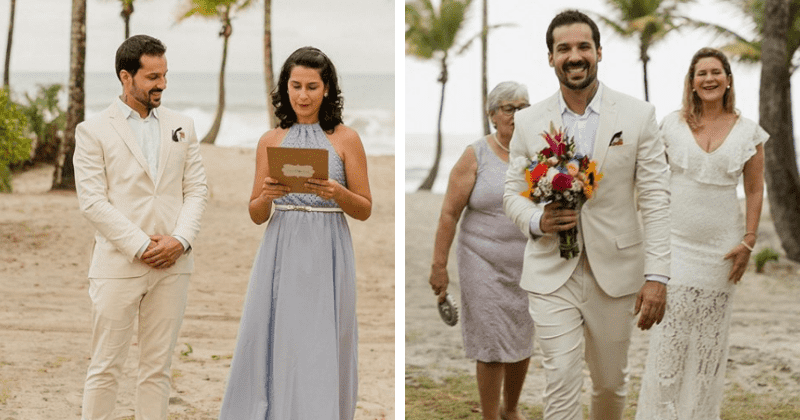 Diogo Rabelo is living his truth and taking "loving yourself" to a whole new level. The 33-year-old doctor from São Paulo, Brazil turned heartbreak into an incredible celebration of self-love. On October 17th, in Itacaré, a small village in the state of Bahia, Brazil, Rabelo decided to go ahead with a wedding ceremony celebrating the love of not two people, but a bigger love, the one he had for himself. He tells Shared, "At first, everyone was against my will to marry me, including my family. They thought this was absurd. However, as I explained the real reason, and as they saw me mature, respect for me, they agreed and supported me. And I put it in my mind that I would do this symbolic act of marrying me to be able to pass on a message to the world to so many people who are suffering from some trauma, from some love disillusionment, that it is possible to get back from any situation when you return your eyes into yourself and see your worth, and start loving yourself for the person you are!"

The video and photographs from the ceremony where Rabelo marries himself have since gone viral. He elaborates, "In the video my wedding ceremony with 40 guests happens, being my family and my friends. At the ceremony, I went in alone and met my mother who took me to the ceremonialist. An interesting fact is that I had not planned a bouquet of flowers, however, I was surprised with my mother holding one, and a friend who cannot attend the wedding sent the bouquet as a gift. During the ceremony, the ceremonialist read a word to me, a message of love, resilience, and hope. Then I made my vows to live and to myself." He has received an overwhelming response of support from people across countries. The newly-wed shares, " After my video and message went viral, I got thousands of messages from people who said they were touched and inspired and motivated to be a better person for themselves. I feel that I am having very positive feedback, and I did not expect this message to go beyond Brazil, and today I receive messages from all over the world."

The events that led to his big day weren't easy. There was heartbreak, a lot of pain but also a period of reflection—emotions many of us ourselves have gone through. Talking about his former relationship, he detailed, "We were in New York, enjoying New Year's Eve last year when we decided to get married, and I proposed to get married in October, and he accepted. In February 2020 we closed the contracts with the hotel where we would make the wedding. But in June of 2020, he broke up with me. He broke up because he said that I was not mature enough to have a marriage with him at that time."

But Rabelo used that time to dig deep and ponder through life's biggest lessons, to grow and evolve on his own. He illuminates, "After the relationship ended, I stayed in a period of reflection on my life, on what had happened and on what I should do. I started to wonder where I had gone wrong, why was this happening to me? I know that I was sincere and true in my relationship, I gave myself heart and soul and did not think it was fair to end the marriage in such an abrupt and cold way. And in that moment I started to think: who am I? What is my value? And it was at this point that I took the weight off myself, accepted my humanity, and started to love myself, self-love, and that was the trigger that gave me: "I'm going to marry myself!". If my ex-fiancé didn't want me, even though I was doing my best, I learned that no one but me can love me the best!"

We love the maturity in his message. Does he have any tips for the rest of us, still struggling to put ourselves first?  "Self-love is the basis of everything. To love yourself is to accept your humanity, to accept the body that God gave you, to accept your identity, to turn your eyes inward and see the immeasurable value that is your life. Once you recognize your self-love, you are able to offer genuine love, true love," he says. For anyone else who has been through heartbreaks, Rabelo offers this nugget of advice, "If you have suffered the loss of a great love, I advise you not to blame yourself, nor to blame the other party. Understand that you are here to evolve as a human being, to learn to deal with frustrations, even if it is the end of a marriage. It is not easy to overcome, but it is not impossible. Everything is easier when you take your eyes off what is happening around you, and try to look inside yourself and ask yourself: "what can I do to be a better person, or happier?" The answer is, 'starting to love me, and put me as a priority!'"