Brave Man Saves 8-Year-Old Niece's Life By Running Back Into Burning House: "I'd Do It Again"

The 20-year-old suffered burns across his body after running into the burning house to save the little girl, and he says he'd do it all over again for his niece and nephews. 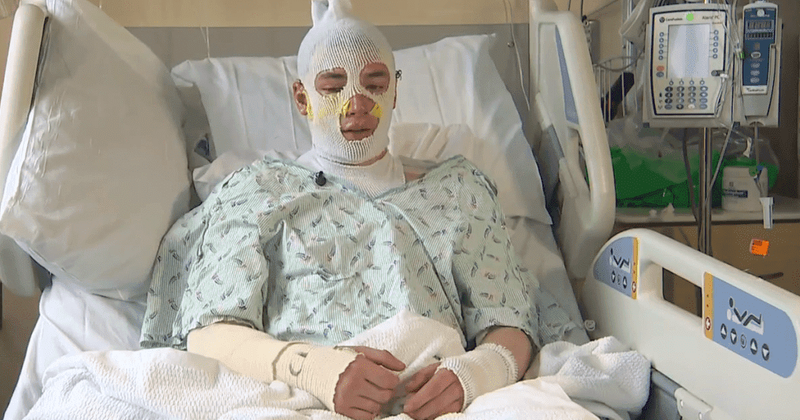 We've heard a lot about the special bond between a child and its parents or even that between grandparents and their grandkids. However today, we have the story of an 8-year-old girl and her brave uncle, who risked his life and ran into a burning house to get her to safety. 20-year-old Derrick Byrd now has gauze face, neck, arms, and back after he suffered serious burns from the unfortunate event, but even as he recovers in a specialized care unit at Harborview Medical Center in Seattle, he has no regrets. In fact, the young man claims he would do it all over again for his niece Mercedes and nephews, Junior and Rory.

According to a report by CNN, when a fire broke out at the home in Aberdeen, Washington, on Thursday morning, Byrd's sister and the 3 children were trapped inside a room on the second floor. The 20-year-old ran out of the house through the flames so as to get the kids out safely through the window. Recounting the sequence of events to 14 News, he revealed that while 6-year-old Junior and 4-year-old Rory managed to jump out the window and into his arms, little Mercedes was too afraid.

"I ran down the stairs, even though I got burnt, started catching the kids. I caught Junior, and I caught baby Rory out the window," he said. At that point, Byrd's sister Kayla fell off the roof and watching her mother fall to the ground, Mercedes retreated further into the burning room. Hearing his niece's screams, he threw caution to the wind and ran back into the flames to try and get her out. Although he suffered fourth-, third- and second-degree burns in the process, the brave uncle managed to get the little girl out to safety.

This 20-year-old uncle ran straight into a burning building to save his 8-year-old niece when a fire broke out at their home https://t.co/JyjuGYqOSp

"She was screaming my name, so I wasn't going to let her just sit there. I wasn't going to let my niece die. I ran up the stairs and pushed through the fire. I could feel it burning me. I got her and took my shirt off and put it around her face, so she wouldn't breathe in any smoke. I just carried her out as fast as I could," recounted Byrd. He added, "I don't care if I was burning. I just wanted to make sure I got her out." Taking off his shirt to cover his niece left Byrd's back exposed to the flames, due to which he suffered fourth-degree burns and nerve damage. But for him, it was all worth it.

Uncle rushes into burning home to save his 8-year-old niece: 'I'd do it again' https://t.co/de1P3fz8VV #KMOV pic.twitter.com/IifW054Hsc

"I spend most my days off with my nieces and nephews. Mercedes is already an uncle's girl," he said, speaking of the bond he shares with the children. Shortly after everyone got out of the burning house, Byrd, Mercedes, and Junior were all airlifted to the hospital. Although he is being hailed a hero for his selfless actions, the young man humbly brushes it all off. "I can't say a hero. I'd just say I care for my niece and nephews. I wasn't going to let them die. I'd do it again. I really would. I don't care. I really would. I'd run back in there and do it again, even if I got burnt worse or died," he said.

Byrd's love for his niece Mercedes really knows bounds. Speaking of why he didn't think twice before running into the flames, he said, "Even though I got burnt, I really didn't care though. I'd rather get burnt than her. She's young. She's still got a lot of stuff going for her. She's a good kid." Unfortunately, the house completely burned down in the fire and while the cause of the fire is yet to be determined, it appears to have started inside on the second floor. Meanwhile, police and firefighters are glad that everyone got out alive. The family's neighbors and friends stepped in to help in their hour of need and started a clothing and food drive for them.

Heroic uncle who rushed into burning home to save niece says he would do it again: "Even if I got burnt worse or died." https://t.co/NEJJGpBuvx pic.twitter.com/sLUVUxvyAq