Brave Senior Dog Saves His Family From Bear Attack, Ends Up Sacrificing His Own Life

Pete, a senior English Rescue Setter, was adopted 18-months-ago & was on a hike on a snowy trail with his family. The other dogs with the family surprised the bear who turned around to charge but Pete stood his ground as his family moved to safety. 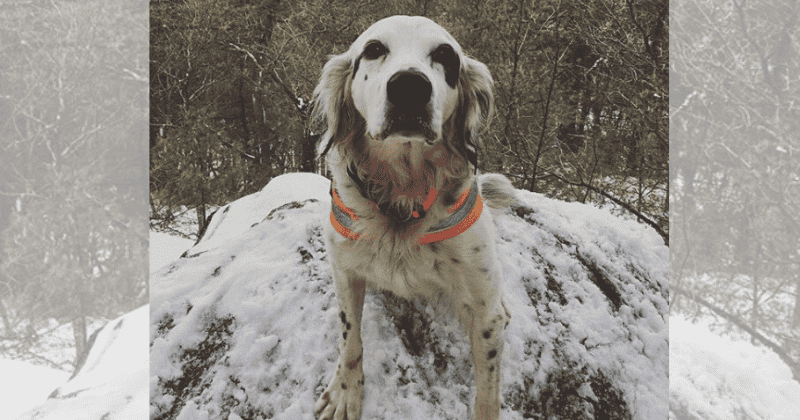 A brave senior dog named Pete died while protecting his family in New Jersey from a bear attack. Pete and his family that comprised his pet parents and a couple of other dogs were hiking when the animals scared a bear on their trail. But before the bear could attack the family, the English Setter stepped in and engaged the massive animal while the others ran to safety. By the time Ben, Pete's owner, went to retrieve his dog, it was already too late. Though alive, Pete was gravely injured and had taken some pretty serious blows. Pete's parents were grateful for their dog's heroic bravery, and his efforts did not go in vain. His story went viral, and many sent messages of condolences and praised him.

On Instagram, Ben wrote a heartfelt post about his beloved pet. He called Pete "our brave, old man" and added that the "dogs surprised a black bear just off the trail" In no time. the bear was nearly upon the entire family.  "It must not have heard or smelled us with the pouring rain. It felt threatened and turned around." Pete stood his ground as his owner led the other dogs to safety.

The post read: Pete stepped up and held off the bear until I could get the other dogs to safety. Once I was sure they were safe, I went back and scared the bear off, but Pete was gravely injured. Ben quickly picked up his dog and rushed him to the hospital.  I was able to get him back down to the main trail and, thanks to Cathi and Kate, we were able to get him in a car and to the hospital pretty quickly, continued the post.

It had been only 18 months since Pete was adopted from Our English Rescue Setter shelter reports the Independent, but the short time was one of his happiest. As they took him to the hospital, Pete hung on. The post added:  He held on like a real trooper the whole time, and he was never alone in his pain. When doctors examined his injuries they knew Pete would not be able to survive.

So our friends lost their sweet setter Pete today. He and some other dogs surprised a black bear while on a hike. Pete bravely protected the rest of the crew who got to safety. Pete later succumbed to his injuries. He was an older guy and went out a true hero. RIP PETE THE HERO! pic.twitter.com/a3W5q9DHbc

The x-rays revealed some pretty bad spinal damage that would mean he could never walk again, if he survived all the surgeries (not a certain thing at his age). We decided it was best to let him go this afternoon. Run free Pete, you no longer have all those aches and pains of old age. You had a great 18 months with us running the days away like you loved. Ben's wife added her own message: Please light a candle for Pete and remember that fostering and rescuing a dog can sometimes save you. Senior dogs have so much to give. Love you Petey. Save me some cheese for when we see each other again. ❤️💔❤️