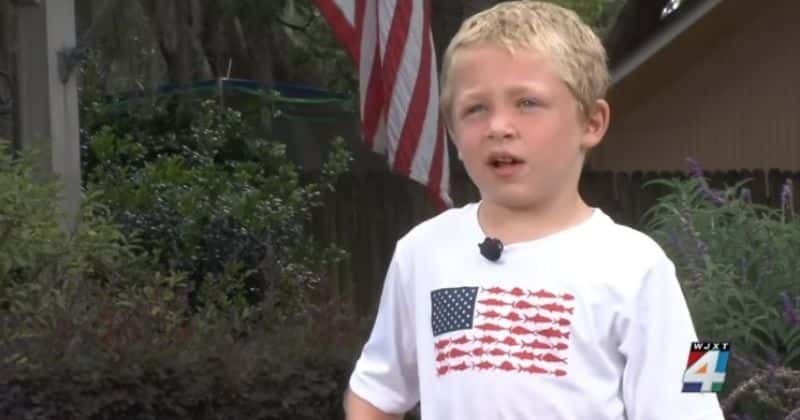 A brave 7-year-old boy in Florida swam for an hour without a life jacket to get help for his father and sister stranded in a river and saved them. Chase Poust, 7, and his 4-year-old sister were with their dad, Steven at the St. Johns River in Jacksonville over Memorial Day weekend for a swim. Steven had anchored his boat to let his kids swim while he fished. However, because of a strong current, the family ended up getting swept away. Abigail who was at the back of the boat let go because the current was too strong according to her brother. Seeing his sister drift away, he also let go to save her. "I felt really scared," Chase told News4Jax. That's when their father jumped in to save them. As he tried to keep his daughter from drifting, he told Chase to swim to shore and get help. Luckily Abigail was wearing a jacket. "I told them I loved him because I wasn't sure what's going to happen. I tried to stick with both of them," said Steven, adding that he wore himself out, and the only chance of having a second shot at life was to get help.

CNN reports that Chase managed to get ashore by floating on his back and doggy paddling so as to not tire out easily. It took him an hour to reach land. Chase said, "The current was going the opposite way of going to the boat and the shore so it was very hard to swim that way." When he did reach the shore, he rushed to the nearest home and knocked on the door. Jacksonville Fire and Rescue Department (JFRD) noted that by then his father and sister had drifted about a mile and a half to two miles away from its original location. The father and daughter had to wait an additional hour before help finally arrived.

Along with the JFRD, the Sheriff’s Office and the Florida Fish and Wildlife Conservation Commission joined hands together to aid in the rescue operation. In a press conference, JFRD spokesperson Eric Prosswimmer said, "We had every resource we could have possibly had coming quickly and we're happy to say all three have been recovered, and all three are doing well. We couldn't ask for a better outcome."

Chase's father was relieved when he saw the rescue agencies. He said, "I screamed for help at the top of my lungs and waved my arms and sure enough someone heard us. Little man also made it to shore and got help and that’s what saved our lives." Prosswimmer also stated that neither the 7-year-old nor the father were required to wear a life vest because the law only applies to children age 6 and under for a vessel that’s under 26 feet.

Netizens commended the bravery of the young boy. Donia Sanchez wrote: That 7yr old is a hero! No one would have known for probably hrs or days if he hadn't swum to the shore! He's an amazing little boy who is a hero in my book!! Beth Ann Babin added: Thank God the 7 year old was a good swimmer. Glad to hear they are all safe! Others had a word of advice for the father. Diane Ceasar noted: When you have 2 children put jackets on..I would hate to choose which child to save...Again thank you Lord GOD that all 3 are safe. Tessa Smith had a suggestion: Maybe they need to start charging parents who don't put life jackets on children. And self . Change the laws. Pamela Johnson Miller thanked the rescue agencies: Many, many thanks for the happy ending to this possibly tragic story. Bless the public servants who made this story possible.

A 7-year-old boy in Florida swam for an hour to get help for his dad and sister who were stranded in a river
https://t.co/xeyF0dPzJo