trending celebrity people lifestyle news animals
Jennifer Aniston Wanted To Have Kids With Brad Pitt, But He Fell For Angelina Jolie By Then

Jennifer Aniston Wanted To Have Kids With Brad Pitt, But He Fell For Angelina Jolie By Then

A year after Jennifer Aniston revealed she was ready for a baby, the couple split. 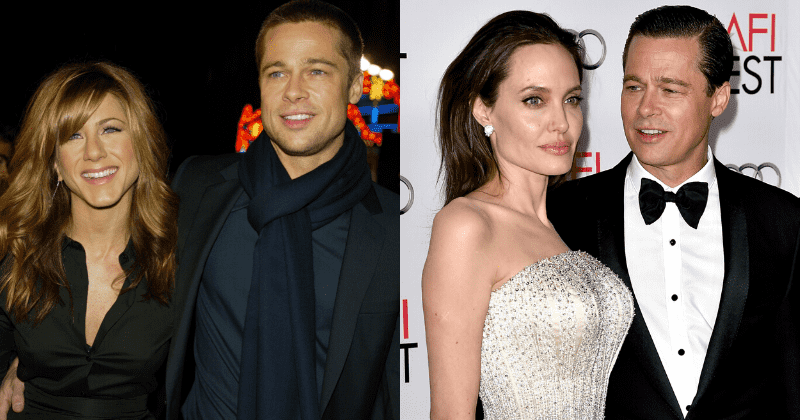 Brad Pitt and Jennifer Aniston were definitely one of Hollywood's "IT" couples. They were an incredibly good-looking couple that America fell in love with. Their agents were responsible for getting them a date in 1998 and by July 29, 2000, the two tied the knot in a lavish Malibu wedding. However, after seven years together, in 2005, the couple filed for divorce. They said in a joint statement, according to Marie Claire, "We would like to announce that after seven years together we have decided to formally separate. For those who follow these sorts of things, we would like to explain that our separation is not the result of any of the speculation reported by the tabloid media. This decision is the result of much thoughtful consideration. We happily remain committed and caring friends with great love and admiration for one another. We ask in advance for your kindness and sensitivity in the coming months."

Many speculated that the actor was having an affair with Angelina Jolie when they filmed Mr. and Mrs. Smith. And indeed, they eventually did go public with their relationship soon after. Jolie spoke about her relationship with Pitt and how it grew. According to PEOPLE, she said, "Because of the film we ended up being brought together to do all these crazy things, and I think we found this strange friendship and partnership that kind of just suddenly happened. I think a few months in I realized, 'God, I can’t wait to get to work.'" What may be heartbreaking to note, especially for Jennifer Aniston fans is that in a 2004 interview Aniston told The Guardian that she was ready to take her relationship to the next level with Brad Pitt and it may be time to have a baby. "'Yeah. It's time. It's time. You know, I think you can work with a baby, I think you can work pregnant, I think you can do all of it. So I'm just truly looking forward to slowing down." She continued, "I'll have finished Friends by end of January, he'll be finishing [Mr. and Mrs. Smith, opposite Angelina Jolie] at the end of February. Then he starts Ocean's Twelve. So I, thankfully, will be able to go and travel with him while he's doing that."

In an interview with Rolling Stone she said Pitt "was just this sweet guy from Missouri, you know?"A normal guy." About her wedding, she said, "I had those typical jitters the day before my wedding but the day of, I was just excited in a good way. The nice thing about weddings now is it’s not just a chick thing. It’s a team effort. The stereotype used to be men grumbling, like, 'Why are you making me do this?' There’s nothing more moving than seeing a man cry at his own wedding." They did seem to have a special bond. However, it was reported that Jen was in no rush to take things to the next level at that time. A source told The Mirror, Jen refused Brad’s sexual advances for nine months out of fear that getting intimate too soon could ruin their relationship.

mr and mrs smith came out 15 years ago 😳... one of the best movies ever made pic.twitter.com/y8Kt7sVcrH

But it was on the sets of Mr. & Mrs. Smith that Pitt grew closer with someone else. And a year later, Jen and Brad ended their relationship... After which "Brangelina" happened. Jen addressed the split in an interview with Vanity Fair and famously described Brad as "missing a sensitivity chip" thanks to a W magazine spread featuring him and Angelina. "Brad is not mean-spirited; he would never intentionally try to rub something in my face," she said. "In hindsight, I can see him going, 'Oh—I can see that that was inconsiderate.' But I know Brad. Brad would say, 'That’s art!' There’s a sensitivity chip that’s missing."

Jolie and Pitt married in 2014. In 2016, Angelina Jolie filed for divorce from Brad Pitt. The divorce reportedly stemmed from an incident between Pitt and their oldest son Maddox. Jolie was the one to file for divorce from Pitt in 2016 alleging that the latter threatened to attack their eldest son, Maddox, while he was intoxicated. Jolie shares her six children with ex-husband Brad Pitt. The couple split after two years of marriage and 12 years of being together. The former couple recently came together for their daughters' surgeries. As for Brad Pitt and Jennifer Aniston, they continue to maintain they are "just friends".

*quietly contemplating every life choice from the past 20 years* pic.twitter.com/3l9Ifk2HAH